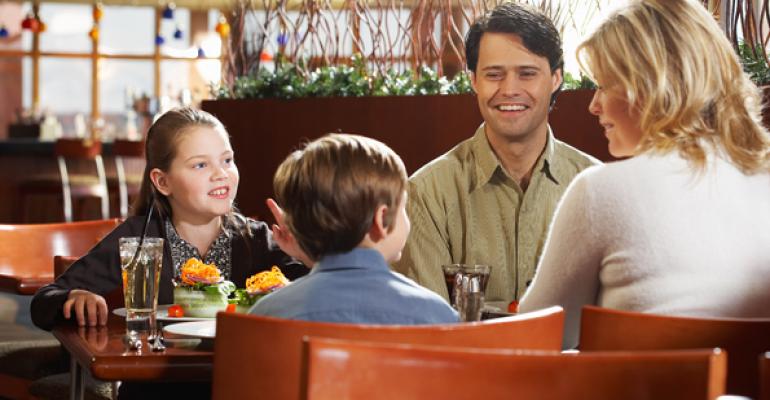 3 ways to get families back into your restaurant

In the restaurant revenue game, every bite counts, whether it’s a king-sized chomp or a tiny-sized nibble.

As such, restaurants should be quick to react when trends indicate a segment of the population is dining out less and less each year. Visits by families with children have been declining since 2008, according a new report from the NPD Group. Families with children made 1 billion fewer visits to U.S. restaurants over the past six years, compared to 306 million fewer visits by adult-only parties, the report indicates.

Family dining represents $83.7 billion (20 percent) of total restaurant sales, NPD reports. Full-service restaurants have experienced the majority of the declines, accounting for 70 percent of all declines from 2008 to 2013.

“In order to bring back parties with kids to the restaurant table, operators and manufacturers need to understand what influences and motivates them to visit,” Bonnie Riggs, NPD foodservice industry analyst, says in the report. “They need to keep in mind that kids are also an important audience since they have considerable influence on restaurant selections.”

So what can restaurants do to gain back some of that lost business, or at least stop the bleeding? Here are three tips to ensure you’re not alienating a major customer base:

1. Ensure meals are priced appropriately
A weakening economy was the main reason for fewer restaurant visits over the past few years, adults and kids alike. A separate NPD report in June 2013 showed quality for the price is the top value driver for foodservice consumers, ahead of both fresh ingredients and menu choices. Parents are increasingly concerned about the value they’re getting for their money—and that extends right onto their children’s plates as well. $17 chicken tenders aren’t going to cut it.

2. Facilitate a kid-friendly environment
A Canadian restaurant made headlines recently when it offered a family dining out for Mother’s Day brunch a “well behaved kids” discount of $5. The father posted a photo of the receipt from Carino Japanese Bistro, which went viral and resparked the ongoing discussion about children in dining establishments. Unfortunately the headlines usually skew the other way, typically highlighting restaurants that have chosen to ban small kids during peak hours or won’t offer meal-ticket refunds when diners can’t find a babysitter.

3. Broaden your kids’ menu offerings
As closely as parents are watching how much they spend on their children’s meals, they’re also more closely analyzing the nutritional value of what their kids are ingesting. Sparked by First Lady Michelle Obama’s Let’s Move! initiative, there is a countrywide movement to counter America’s obesity problem. A staple of that movement is improving access to healthy, affordable foods. “Healthful kids’ meals” ranks No. 4 in the National Restaurant Association’s Top 20 Trends to look for in 2014. Your kids’ menus don’t necessarily have to meet Atkins standards, but they should be broadened beyond the typical fare to offer families well-balanced choices.