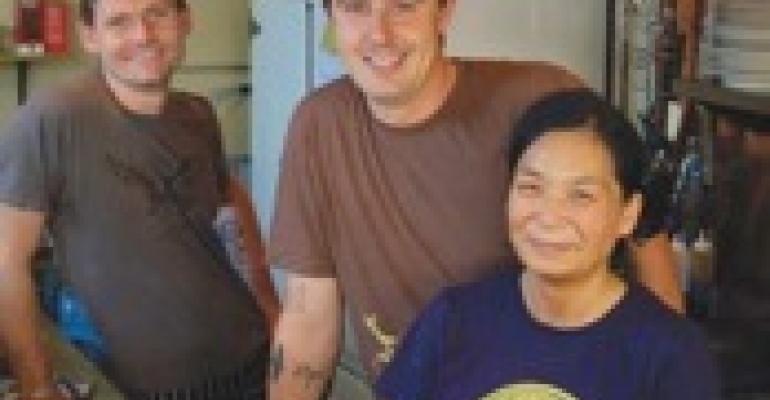 There's something deliciously rebellious about the culinary scene in Portland, OR. Let's just say you may not find as many CIA graduation certificates hanging on kitchen walls here as in other places. No, this city prides itself on its renegade chefs, many of whom dropped out of cooking schools to go their own way. They are a wild, tattooed bunch that can cook the socks off many of their Top Chef wannabees with diplomas. A case in point is Gabriel Rucker of Le Pigeon. He's a junior college dropout and self-taught cook whose arm bears several inked pigeons in flight. It's an homage to the restaurant he often refers to as "The Dirty Bird" or "The Pidge." He's irreverent, much like the smart-ass kid who sits in the back of every class. But that kid now works in the tire department at Sears, while Rucker, 26, is the darling of the culinary world. Food & Wine recently named him a 2007 Best New Chef, while The Oregonian named him "Rising Star of 2007."

But don't think it's going to his head. "I have zero desire to advance up the food chain," he told the Oregonian. Nothing is more important in his life than "amazing his customers with the unexpected," he says, "though girls and beer come a close second and third."

It's not false modesty. For this picture, he insisted on including his chefs, Erik Van Kley (left) and Su-Lien Pinot. "I just can't be singled out anymore. No chef does it alone."

He truly believes cooking is a team sport, which explains why he created a "Think Tank Board," and encourages anyone to post menu suggestions and such.

For Rucker, jammin' with everyone in the kitchen is fun (or should be), and that fun translates to the food and the people who eat it.

Though there's whimsy in most of his funked-up, bistro-style fare (he offers beef cheeks and halibut cheeks on the same plate and calls it Cheek-to-Cheek), his love of offal and explosive flavors suggests he's much more serious than fans of Applebee's can bear.

Like most young, indy chefs, the pig is his friend. It appears everywhere, though you will find the namesake pigeon (squab) holding court as well.

"I'm having so much fun. I'm glad people notice."