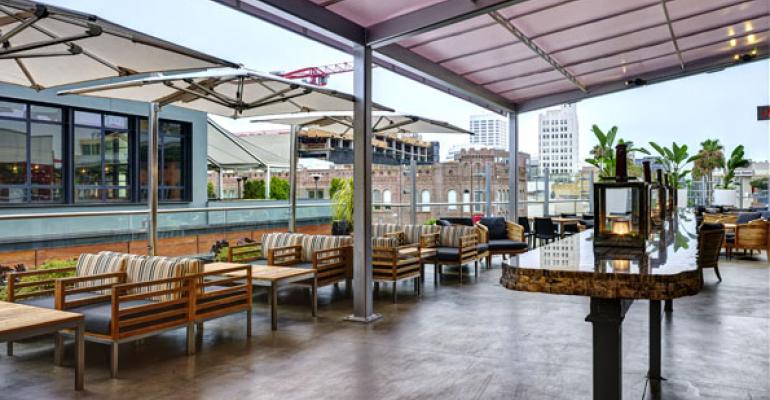 How to optimize a restaurant design

Architect Stephen Francis Jones compares the restaurant design process to building a sports car: It's a powerful and beautiful machine. “How do I keep it sexy? How do I keep it running well? How to I keep it adequate to the task of satisfying customers?” he says. The clients in Jones’s broad restaurant/hospitality portfolio—which includes Wolfgang Puck’s Spago, MB Post in Manhattan Beach and Lucky Strike Lanes, a retro bowling alley/lounge concept—count on him to interpret their vision and create a sleek, well-oiled machine.

Jones’s firm SFJones Architects recently put the finishing touches on the Redwood Grille and Del Frisco’s Grille in Santa Monica and a handful of other L.A.-area projects; ahead is a rebranding of La Brea Bakery and Firestone Walker Brewery as well as two new concepts in Kenya. Jones shared some tips on what any restaurant owner needs to consider before sitting down with a design/architecture firm.

First things first, Jones says. Look at the site, the assets, the concept and the target market. “Does your concept lend itself to be a destination, or will you be pulling people in off the street?” he says. The new Del Frisco’s in Santa Monica took over a high-profile space in a tourist location, he says, but owners of the previous restaurant didn’t make the most of it. “They had totally turned its back on the street. They had this incredible location, but from the outside you didn’t even know there was a restaurant there.”

His firm installed 10-foot-high windows that provided a postcard view of the ocean, the beach and the famed Santa Monica pier; a patio pulls in energy from the street.

If it’s a destination restaurant, on the other hand, you should be thinking about ways to tie the surroundings into the design. M.B. Post in Manhattan Beach, a quiet suburb of L.A., took over a former post office that had been home to several failed restaurants; Jones thinks the predecessors flopped because they had no connection to the community. He incorporated beach volleyball posts, elements that evoked the former post office and other local accents to give it a sense of place.

Design with an eye towards service

Another important consideration: How will your design help or hinder service? The proliferation of fast-casual restaurants presents traffic flow challenges that don’t crop up with full-service operations, for example. “You need to be able to accommodate the quicker turnaround time,” Jones says. But sometimes that gets complicated. Besides an ordering line, there might be a grab-and-go counter. Where do people wait for their orders? “You really have to think about how to put more distance between where people order and line up, and what does that do to the people sitting? Do they have people’s butts in their faces?”

Speaking of layouts, Jones says it’s important to avoid creating less-desirable seating zones. “Never design a seating layout with a space where you would not be seated yourself,” he advises. “I’m a very visual person. I hate seeing a straight line into service areas, or only seeing a wall or being in a space where I will never get any service because I am so far from the action.” A clever design can find tricks to dress up the less-than-ideal spots on the floor. For instance, Jones says, “people will sit in a booth anywhere, so if I have a Siberia location, I will try to put a booth there.”

Accoustics are an important and often-forgotten element of the dining experience, one that should be factored in early in the design. “If you ignore acoustics until opening day, you will have a hard time addressing it,” Jones says. What is the major source of the noise? How can you mitigate it?

Exhibition kitchens, for instance, are very popular for the energy they bring to a space. But they bring a lot of noise as well. The Redwood Grille has a glassed-in exhibition kitchen so guests can see the action without having to compete with the noise.

The ratio between the space devoted to the front and back of the house is another important consideration when creating a new space or redesigning an existing one. Jones thinks an optimal balance is 60/40 front/back, although smaller restaurants will likely have a higher back-of-house percentage and very large operations will devote more space to seating. That’s great during busy times is full, but how do you disguise the fact when it’s not so much? “You have to think about how you can section some of the parts off for less-busy times,” Jones says. He suggests breaking larger spaces up into a series of more intimate rooms. “There is nothing worse than walking into an empty restaurant,” he observes.