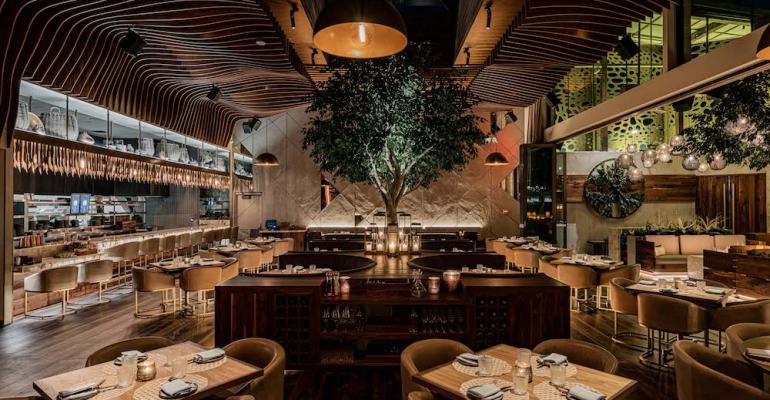 Noble 33
Toca Madera in Scottsdale, Ariz. A flagship version of Toca Madera is scheduled to open in Las Vegas in the spring.
Hotel Dining

Noble 33 plans high-energy, fine dining that will draw people to ‘where there’s action’

Los Angeles-based group will expand Toca Madera and Casa Madera, along with other new concepts

Doubling down on high-energy, experiential fine dining, the founders of Los Angeles-based The Madera Group have launched a new hospitality company with plans for growth: Noble 33.

The Madera Group was the parent to the fast-casual Tocaya concept, which last week merged with Tender Greens under a new company called One Table Restaurant Brands, or OTRB.

Staying under the Madera Group umbrella, however, were two full-service concepts: Toca Madera and Casa Madera. Those restaurants, as well as new social-dining concepts in the works, will grow under the new Noble 33.

The new Noble 33 will be led by Tosh Berman, who co-founded The Madera Group, and Mikey Tanha, former Madera Group president. Both will remain Madera Group board members.

Berman is co-founder of Noble 33 and chairman. He also serves on the board and as a consultant for the newly formed OTRB.

Tanha is co-founder and CEO of Noble 33, overseeing the new hospitality group and its plans for global growth.

“This is what Tosh and I are really passionate about, this high-energy fine dining,” said Tanha in an interview. “Our passion really came from the fact that Tosh and I love traveling and some of the best moments we’ve had together with friends and family have been in beautiful, fun restaurants around the world.”

Noble 33’s growth is already in the works.

Toca Madera has locations in the Los Angeles neighborhood of West Hollywood, as well as Scottsdale, Ariz. A flagship location is scheduled to open in Las Vegas in the spring at CityCenter on the strip.

“That’ll be a bit bigger than Scottsdale, but it’ll be the same format, where we have the lounge connected to the main dining room with an open kitchen,” said Tanha. But the Las Vegas location will also have a hidden speakeasy, for a slight twist.

Toca Madera is known for its music formatting and theatrics each night. It might be an electric guitar player who curates music with the house DJ, for example, or fire breathers that dance.

A variation of the concept also opened pre-pandemic at the Treehouse hotel in London, though the hotel has only recently reopened after the pandemic-related shutdown. There, the restaurant is called Madera at the Treehouse.

The group also has signed on to operate several concepts at Hotel Figueroa in downtown Los Angeles, including the more casual Café Fig, and the poolside venue La Casita, both of which are open.

Coming in September will be the new concept Sparrow, the flagship restaurant of the property, offering southern Italian coastal cuisine and its own brand of theatrics, said Tanha.

In October, Noble 33 will open Casa Madera at a 1 Hotel in Toronto. Tanha described Casa Madera as lighter in design and more seafood driven, though also rooted in Mexican cuisine. “It looks more like a beach club in Tulum,” he said.

A flagship location of Casa Madera is also scheduled to open in Los Angeles’ Mondrian hotel in January, where about 75% of the restaurant will be outdoors, he said.

More is planned for Chicago, Miami, New York and Dubai, Tanha said. Noble 33 is open to all kinds of partnerships, he added, but hotels are a sweet spot.

With the hope that COVID fears continue to lift, hotels are looking for opportunities to bring in experiential restaurants as an amenity, said Tanha.

“I think hotels are realizing more and more that bringing in a great F&B operator that can not only deliver food but an experience enhances their brand,” he said. “People want to go where there’s action, where there’s a really cool amenity that can be a night out.”

CORRECTION: This story has been updated to correct Mikey Tanha's former title. He was president of The Madera Group.