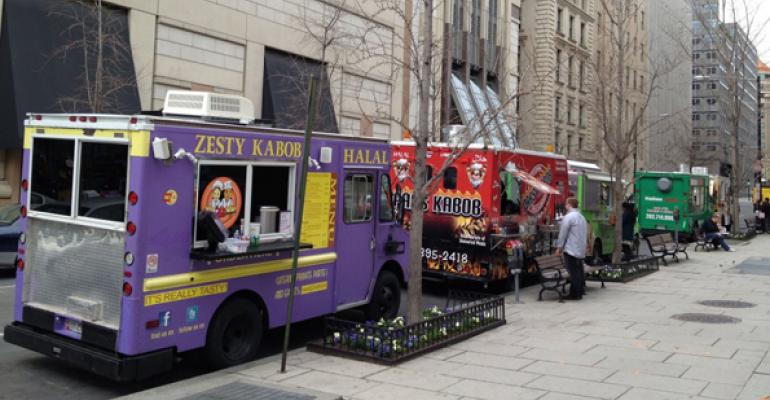 You know the food truck segment has achieved legitimacy when the National League of Cities counsels members that it’s time to stop hassling food truck operators and start treating them as the economic force they have become. That’s the upshot of “Food on Wheels: Mobile Food Vending Goes Mainstream,” a 32-page report designed to show municipal officials how they can incorporate food trucks into their city’s business community in a way that balances the interests of truck operators with those of the city’s residents and its existing restaurant businesses.

The nub of the issue, from the National League of Cities point of view:

“Mobile food vending generates approximately $650 million in revenue annually. The industry is projected to account for approximately $2.7 billion in food revenue over the next five years, but unfortunately, most cities are legally ill equipped to harness this expansion. Many city ordinances were written decades ago, with a different type of mobile food supplier in mind, like ice cream trucks, hot dog carts, sidewalk peddlers, and similar operators. Modern mobile vending is a substantial departure from the vending typically assumed in outdated local regulations.”

Amen, say food truck operators who have spent hours or days at City Hall trying to secure needed permits and licenses. So what does this report suggest cities do to get up to speed on food truck realities? The study analyzed mobile vending regulations from 13 U.S. cities. Here are a couple of the conclusions it reached.

Balancing the use of public space

Cities are all over the map when it comes to how long they allow food trucks to park on public roadways before having to move along. Brick-and-mortar restaurant owners, in particular, want to keep that time short.

Looking at all the competing factors, the National League of Cities report came up with this proposed guideline: “Time limits of four hours or longer are recommended. Vendors need approximately one hour to set-up and pack-up once they are done with selling. As a result, anything less than four hours leaves vendors with only one to two hours of actual vending time. Moreover, it is more difficult for city staff to track food trucks for safety or health purposes when they are in several locations throughout the day.”

That covers how long a food truck should be able to park in a particular spot. What about the actual location of those parking spots, particularly in relationship to existing brick-and-mortar restaurants?

“Proximity restrictions should be no more than 200 feet at the high end. Density issues may call for a tiered structure, or for abandoning proximity altogether. One of the problems with adopting an explicit distance rule is that a ‘one size fits all’ approach ignores context. Three hundred feet may make sense in less dense areas of a city, but such a distance is impractical in very dense neighborhoods. A city right- of-way, with multiple restaurants on both sides of the street where the distance between each side may be less than 300 feet, makes the area entirely off limits to mobile vending. As such, cities may want to loosen or abandon proximity rules in dense neighborhoods with a great deal of commercial and residential activity.”

Food truck operators will likely embrace these recommendations. If adopted, they will take some of the expense and much of the hassle out of starting and running a mobile food business. But if and when city officials put them into effect, owners of brick-and-mortar restaurants are going to wonder why food trucks are getting so much slack.

Many other facets of food truck regulation, including public health, public safety and the role of commissaries are addressed in this study.

Make the most of your restaurant's food truck options
May 15, 2013