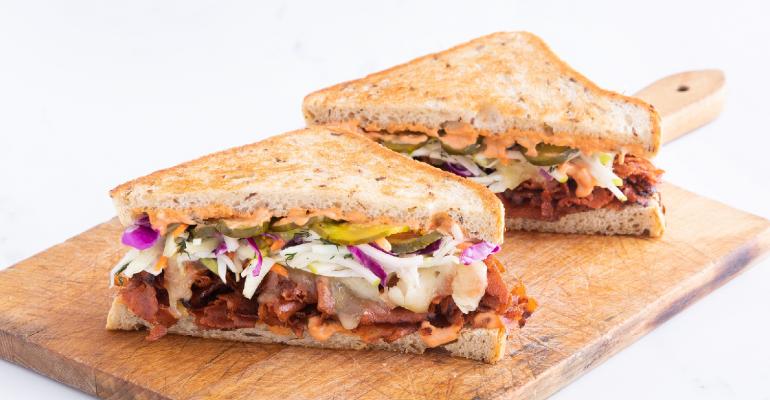 This larger reconsideration of deli standards has led to the reimagining of the Reuben sandwich, one of the segment’s favorite noshes. Its classic corned beef-Swiss cheese-sauerkraut combo have been the subject of update and innovation on several fronts.
Food & Drink>Food Trends

The classic corned beef, Swiss and sauerkraut combo can be made with kimchi, meat substitutes or different cheeses

The past few years have seen a surge in new-age Jewish delis that pay affectionate homage to classic operations, while adapting distinctly contemporary points of view. In addition to its cheeky moniker, Call Your Mother, a "Jew-ish” operation in Washington, D.C., features sassy specials like Pastrami Fried Rice with sofrito, jalapeños and soy sauce.

Similarly, Sam & Gertie’s in Chicago is billed as the world’s first vegan deli on the basis of its unorthodox chik’n, chopped livah and laks, all plant-based meat substitutes that are made in-house. Its grandparental namesakes are doubtless proud to know that the restaurant sold out of food in its first two days after opening last December.

This larger reconsideration of deli standards has led to the reimagining of the Reuben sandwich, one of the segment’s favorite noshes. Its classic corned beef-Swiss cheese-sauerkraut combo have been the subject of update and innovation on several fronts.

Vegetable based. Meatless versions seem to have taken on a life of their own. In Atlanta, The General Muir’s Vegetarian Reuben uses smoked, coriander-rubbed beets, while The Mushrooben at Jeff’s Table in Los Angeles goes with roasted, pastrami-spiced maitake mushrooms. Eleven City Deli’s Reuben Veggie Reuben is made with grilled red pepper, grilled portobello mushrooms and spinach and is usually on the menu at both the L.A. and Chicago locations, although the Los Angeles location is temporarily closed due to the COVID-19 pandemic.

Mendocino Farms, the L.A.-based sandwich chain, invites its patrons to Eat Happy with seasonal specials like this spring’s Mrs. Goldfarb’s Unreal Reuben made with beets, chickpeas and tomatoes. It was presented with Havarti cheese, but vegans could substitute tomato-cayenne Chao vegan cheese at no extra cost.

Upscale touches. Many restaurateurs hew closer to the original Reuben, making minor tweaks to differentiate and enhance their rendition. There are alternate cheeses in place of the more familiar Swiss, as with Jeff’s Table’s Franco-Italian doubleheader of Piave Vecchio cheese from Northern Italy and Comté. The latter is the French first cousin to the more familiar, Swiss-made Gruyère, which turns up on the Vegetarian Reuben at The General Muir and the Rutledge Classic Reuben at popular Rutledge Cab Co. in Charleston, S.C., which also substitutes Thousand Island dressing for the standard Russian.

Birdie’s Reuben at Birdie G’s in LA opts for Emmental cheese and perks things up with deviled (which is to say spicy) Russian dressing, all crisped up in a waffle iron.

Ethnic mashups. Kimchi, the Korean pantry staple made with fermented vegetables like cabbage, provides a natural opportunity for Reuben riffs. In Tampa, Fla., Rogue Sandwich Co. tempts homesick New Yorkers with the Brooklyn Seoul Sandwich that pairs pastrami with kimchi and a bracing, gochujang-spiked Russian dressing. In Chicago, Steingold’s marries tradition with a self-described rebellious streak, as witness the Sister-in-Law Sandwich, in which pastrami is topped with dill kimchi and a dollop of anchovy mustard.

Looking ahead, the Reuben revival will rev back up as delis around the country reopen for service. When they do, watch for newer sandwich options in the Jew-ish category to emerge. Smart money is on the sabich, an Israeli street-food favorite that is very much in tune with the times. Its key components include eggplant, hard-boiled eggs and Israeli tomato-and-cucumber salad stuffed into pita or laffa bread. The inclusion of eggs makes it appropriate for either breakfast or lunch; and if you leave out the eggs it’s appealing to vegans. Ema in Chicago adds hummus to its version, while Atlanta’s Rina puts in pickles. Spice Boys Kitchen, a food truck in Sarasota, Fla., really pushes the envelope with crispy potatoes, pickled cabbage slaw, a medium-boiled egg, garlic-confit tahini and amba, a mango-based chutney; the pita is imported from Israel.

Chains are trying it, too. Six-unit The Hummus & Pita Co., based in New York City, offered a limited-time sabich made with spinach, hard-boiled eggs, tomato-cucumber salad and fried eggplant, the latter borrowed from the side-dish menu. And Boston-based, 15-unit Tatte Bakery & Cafe, goes with roasted eggplant, along with hard-boiled egg, green tahini sauce, cucumber and chopped salad, all served on pita.