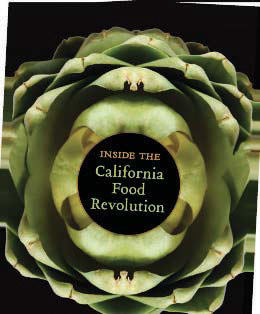 In this insightful and compelling book, chef and author Joyce Goldstein provides history in a lively way, putting it into social context and acquainting us with the people who challenged our culinary status quo starting three decades ago. In 300-plus pages, she weaves in interviews with nearly 200 chefs, artisans, purveyors and others who, like her, played a part in this culinary revolution—including Bruce Aidells, Alice Waters, Bradley Ogden, Annie Somerville, Jeremiah Tower and Wolfgang Puck.

Goldstein has a great vantage point for writing Inside the California Food Revolution. In 1984, the award-winning Goldstein opened Square One in San Francisco, and she has authored 26 cookbooks. She received the James Beard Award for Best Chef in California, and the Lifetime Achievement Award from Women Chefs and Restaurateurs.

In the mid-1970s, California chefs and restaurateurs were independently revisiting our culinary tradition and branching out in inspired ways. Within California, there were some differences in regional cooking philosophies, too, such as technique versus ingredients. As Goldstein notes, “In the formative years of California cuisine, Northern California chefs focused on fresh, organic, ingredient-based cooking,” adding that their dishes were simple, unpretentious ones derived from classic cuisines. Southern California chefs, she writes, “gravitated toward trend-setting, technique-based cooking and emphasized high-status ingredients and flashy presentations.”

California cuisine, as it came to be known, took America’s culinary scene in new directions. Goldstein explores the influences of that revolution, including women chefs, the transformation of dining rooms and kitchens, the revival of the farm-to-table connection, and more. Best of all, you’ll find Inside the California Food Revolution as engaging as it is educational.