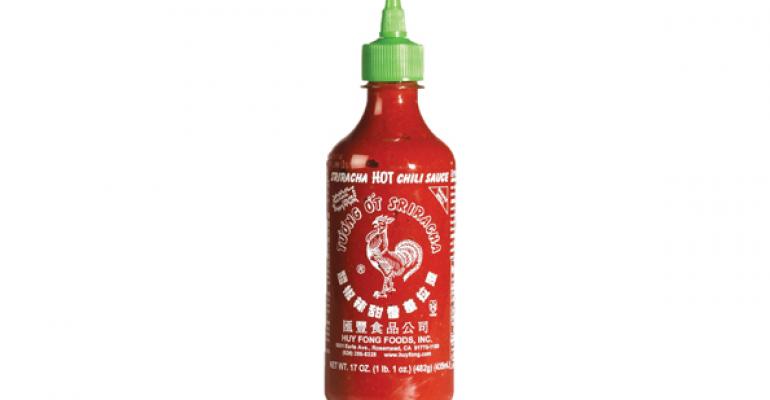 Here’s what coming up next for restaurant operators, according to the seers who compiled IBISWorld’s new report, “Serving Up Diversity: Major Trends in the Foodservice Sector.”

“Demand for authentic ethnic food is expected to remain strong over the next five years as the millennial generation and growing immigrant population drive demand,” the report concludes. “Restaurants will continue to chase the strong purchasing power of millennials with culturally diverse appetites.”

One category set to benefit mightily from this trend: hot sauce, particularly sriracha. Once a little-known condiment found mainly on Thai restaurant tabletops and in Asian grocery stores, it has quickly gained popularity in foodservice. Now a company the size and scope of IBISWorld tracks this category, noting in its new report that sriracha sales increased at a rate of 3.6 percent from 2009-2014. That growth came even though much of the U.S. supply came from a single manufacturer, Huy Fong Foods.

Huy Fong famously does not advertise, but its new competitors do. Companies that have gone into the sriracha business include Tabasco, Kikkoman and Lee Kum Kee. Their marketing prowess could boost demand even higher.

Consumer sriracha awareness is already significant. When Subway patrons have their choice of two sriracha-based sandwiches in the chain’s Fiery Footlong Collection, you know the mainstream has been breached. Ditto for White Castle’s sriracha chicken slider. On the gourmet burger front, Southern California-based Slater’s sriracha burger uses Huy Fong’s sriracha sauce atop its signature 50/50 blend of ground beef and ground bacon burger. Expect many other chains to follow suit.

Who’s eating all this sriracha?

IBISWorld analysts say that in addition to heat-seeking Millennials, new arrivals in the U.S. are boosting demand for this category.

“The rising popularity of ethnic cuisine is driven by the growing number of immigrants entering the United States and a generally more adventurous American palate,” the report says. “The immigrant population (defined as those with no US citizenship at birth) as a percentage of the total US population has risen from less than 5.0 percent in the 1970s to about 13 percent today, according to the Migration Policy Institute.

“This growing demographic has introduced a vast assortment of spicy cuisines to American palates, and the market’s response has been overwhelmingly positive. Restaurants have adapted to their customers’ changing tastes by offering fiery dishes, many of which rely on hot sauce for their distinctive flavors.”

But Millennials also seek out food items that are hand-crafted, small-batched and artisan made. Restaurants might wish to make their own sriracha sauce in house to appeal to this preference.

Sriracha-making isn’t that tricky, particularly for restaurants that routinely make their own sauces in the first place. Here are a couple of recipes that could get you started.
One place to begin experimenting might be this recipe, billed as “Paleo Sriracha.” Standard recipes call for a week-long fermentation period. But this one gets the job done in 20 minutes.

Both recipes come with detailed step-by-step procedure notes with helpful photos, so even rookie sriracha makers should have success on their first batch. Be sure to heed the warnings about pepper sourcing and preparation, and pay close attention to the texture and mouthfeel of your finished product.

Do it right and you’ll be ready to plug into a trend that IBISWorld says is coming. And if you want to see Millennials consuming sriracha, head to San Jose, CA, on Labor Day weekend end to catch the Electronic Sriracha Festival. “Two city blocks, three stages of electronic music, four bars and 120 sriracha-infused dishes,” the promoters claim.