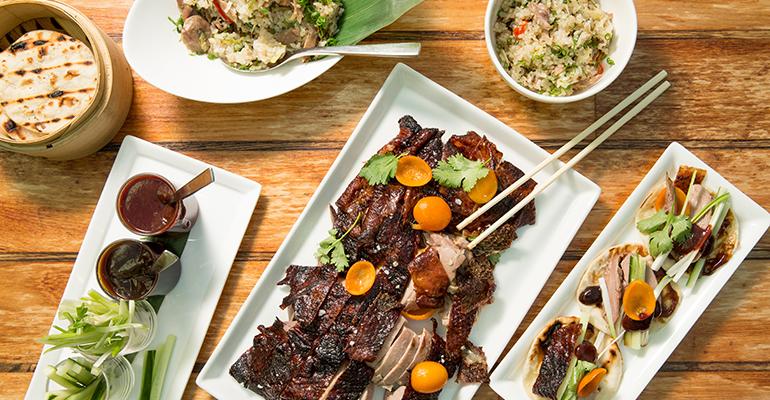 Restaurants pucker up for Asian citrus

Calamansi, kumquat and yuzu are foreign fruits to many American diners. But these and other Asian citrus may soon become more familiar as chefs who love their unique, and sometimes complex, flavors are adding them to cocktails, entrées and desserts.

At Cindy’s, Khaund opts for calamansi — a green-skinned fruit known as the Philippine lime — to make the Golden Lime mocktail, which also includes honey, fresh tarragon and soda. The light, refreshing beverage is easily transformed into a cocktail with the addition of Ron Zacapa and Cruzan Black Strap rums. The Cilantro Cocktail with tequila, agave, “nitro-muddled” cilantro and yuzu, at Three Degrees in Portland, Ore.

“It’s so easy to reach for lemon or lime when creating tequila cocktails, but that gets boring and can limit the resulting cocktail,” Davis said. “[Yuzu] is really versatile as an ingredient. It adds a whole new layer of complexity to the sour family of cocktails and is also great as a highball with soda water for a non-alcoholic drink.”

“This dish went on a few weeks ago, when I went to the local fruit stands and saw pomelos and other citrus that was in season,” said Talde, who is the son of Filipino immigrants. “I felt inspired to create a dish that was nostalgic.” Kumquats — small, oval-shaped citrus with sweet, edible skin — are the preferred citrus of Chris Starkus, executive chef at Urban Farmer in Denver, who said it represents good luck in many Asian countries.

Starkus likes to use this wintertime fruit when he changes the steakhouse’s menu at the end of summer. For example, on his menu in mid-October was a black cod entrée garnished with kumquats and delicata squash, tossed with Marcona almonds and an herb purée. It will remain on the menu until spring arrives.

In December, chef Gregory Gourdet of Departure, a Pan-Asian restaurant and lounge in Portland, Ore., will offer his annual holiday Peking duck with kumquats. An alternative take on classic holiday meats, such as turkey or pork, the duck is cured, blanched in honey and Chinese wine, and served with a housemade plum sauce, kumquats, scallions, hoisin and cucumbers. Following tradition with Peking duck, Gourdet serves the dish with thin pancakes to wrap the duck and accoutrements.

Also serving duck with kumquats is chef Nick Leahy of Saltyard, a small-plates restaurant in Atlanta. When the sweet-and-sour fruit is in season, Leahy likes to pickle it and serve it with duck.

At the Korean-inspired, family-style restaurant Atoboy in New York City, chef and partner Junghyun Park prefers to serve kumquats with shellfish. For a clam entrée, steamed and shelled littlenecks are placed in a white kimchi juice and mixed with Korean pear and kumquat, sprinkled with puffed buckwheat, and drizzled with lemon oil and micro sea grass.

“I like that [kumquat] combines the best that citrus fruits have to offer — sweet, acidic, tart — which are always key in elevating and balancing out a dish,” Park said. “I also think it's quite fun that it's a citrus fruit that you can consume whole, including the skin.”

A closer look at the menu trends that are driving traffic across all segments
Oct 28, 2020