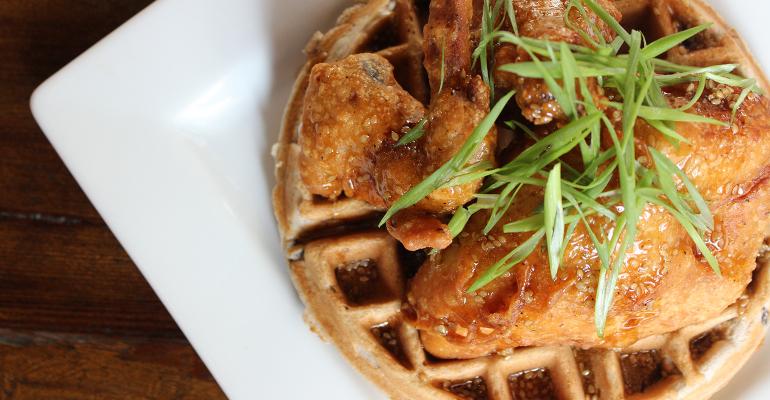 This widely used bean is sweetening up menus

Red adzuki beans are stepping into the spotlight in traditional sweet paste form, frozen into cool confections, baked into waffles and mixed into macrobiotic bowls. One of the first beans to be cultivated in Asia thousands of years ago, its name translates to “small bean” in Japanese. They’re poised to take menus in a decadent-yet-virtuous, brunch-all-day direction.

Korean fried chicken and red bean waffles
Tomas Lee, chef, Takorea, Atlanta
Price: $16 (just the waffle, $8)
Midtown Takorea & Ssam Bar is a casual Korean-Mexican fusion concept, one of three Takorea locations in Atlanta. Chef Tomas Lee started with Hankook Taqueria, and has always aimed to make Korean flavors more accessible by offering them in the form of more familiar dishes. Some of the dishes are Mexican classics (“takos” and burritos) and some, like the chicken and waffles pictured above — with red adzuki beans in the batter — are riffs on cultural cuisine lore that stretches from the Pennsylvania Dutch to the American South to Jazz-Age Harlem and then Korea. In other words, take the concept of chicken and waffles farther east than ever, and this is the result. The sweetness of the adzuki beans adds to the salty-sweet balance of the dish. 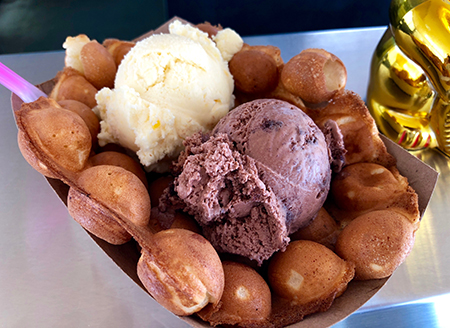 Chocolate adzuki ice cream
Jesse Mason and Helen Qin, Mason’s Creamery, Cleveland
Price: $7
Mason’s Creamery owners Jesse Mason and Helen Qin make small batches of ice cream by hand, in flavors like lavender-salted, Cleveland whiskey and paw paw. The couple first met in Los Angeles, and Cleveland native Mason’s stories about his hometown got Qin on board to build a business and life in Ohio in 2013. The duo’s creations are fanciful and fun, and red adzuki beans have earned a spot in their magic bag of ingredients, as in this egg waffle with chocolate adzuki ice cream and marzipan ice cream. 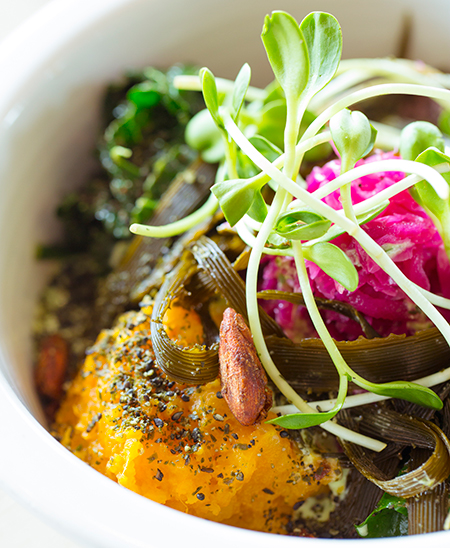 This means transparency, inspired service and sustainable focus. Menu items are categorized as “dazzling,” “pure,” “whole” and “gracious,” with Technicolor veggies, lesser-known seeds and rugged grains. If the term “macrobiotic” ever came to be associated with muddy lentils and bland, dutiful dishes, this macrobiotic bowl erases that association with lighting speed. The adzuki beans are a protein-packed counterpoint to braised garnet yams, sea veggies, sautéed greens, kimchi, garlic tahini and toasted almonds over brown rice or quinoa. 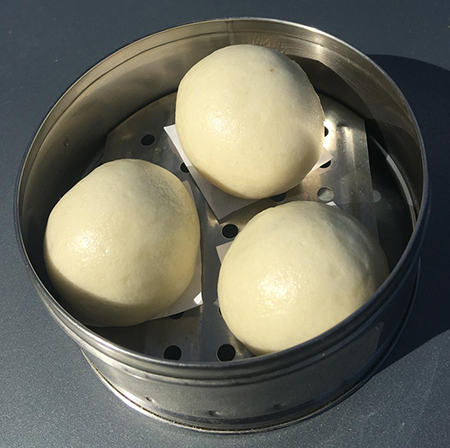 When the casinos and celebrity chefs on the Las Vegas Strip have lost their luster and that insatiable craving for dim sum hits, here’s a great place to hit up: Yum Cha, an eatery with a friendly, unassuming vibe and an enthusiastic crew serving up serious dim sum. Raymond Leung and his business partners come from different parts of Asia, and that shows up on a diverse menu with an array of steamed buns, sticky rice, curries, beef tendon, chicken feet, pot stickers, noodles and a lot more. Eating dessert first is encouraged (who doesn’t like that?), and the red bean buns, perfect pillows with red bean paste tucked inside, are a great “appetizer dessert,” leading up to the custard tarts for which this place is famous.