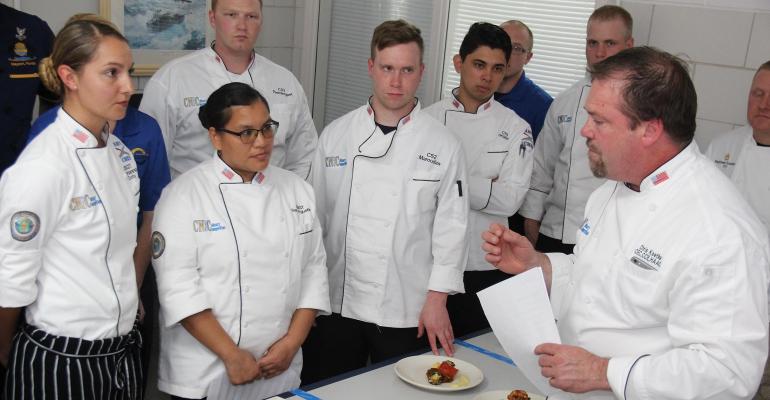 Veterans may provide solution to labor shortage in commercial kitchens The competition was run strictly according to the protocols established by the American Culinary Federation, with each of the 10 teams in contention comprising two chefs with a commis to assist them. The required ingredients included a market basket of trendy items like apple-smoked pork belly, cauliflower, Arborio rice and fresh pineapple, and the resulting dishes were creative and sophisticated. There was pineapple-braised steak in a tamale with cauliflower mash and spicy pineapple chile sauce, chicken freekeh salad with jalapeño-pineapple vinaigrette, and roasted red pepper soup with crispy pork belly topped with pineapple salad, among many others. After three days of intensive training, naval cooks were ready to create their dishes.

What made this event different from other cooking contests was that it consisted entirely of military personnel. It comprised the culinary specialists serving at naval installations around the globe who were joined this year by a team from the United States Air Force, and it was conducted at Naval Station Great Lakes, 40 miles north of Chicago. Now in its eighth year, the program has become a critical component in preparing the participants for life in a military kitchen, and few allowances are made for their rookie status. After receiving three days of intensive, hands-on training, they move on to the main event, which includes menu planning and writing, staggered start times, mad dashes to the pantry and feverish races to the finish line, all familiar elements to aficionados of the kitchen-gladiator genre. After the dust settled and their nerves calmed, competitors were generally in agreement that time management had been their biggest challenge. None suggested that he or she had been at all intimidated by the dazzling roster of instructors and judges, among whom were certified master chefs, James Beard award nominees and winners, and executives of leading food and equipment vendors.

The judging was strictly anonymous, based on criteria like plate presentation, creativity and flavor, and the final results were eye opening: Four teams actually scored sufficient points to qualify for the equivalent of an ACF bronze medal.

Why should commercial restaurateurs care about this? First, many are facing a serious talent drought, scrambling madly to recruit skilled cooks for their kitchens. An article in Fortune magazine a few months back described the situation as desperate in many cities. It blamed this state of affairs on factors like indebtedness from high-priced culinary schools and impatience on the part of many Millennials, who would just as soon skip the hard stuff in the back of the house and go directly to TV stardom. The author also opined that many seem to have an inborn sense of entitlement. Military operations don’t readily accommodate a sense of entitlement, inborn or otherwise, as culinary personnel develop their work ethic in high volume, high pressure kitchens. They come to understand the demands of mass feeding up close and personal on a daily basis.

Perhaps more important is the attitude that they typically bring to the job. When questioned about their role and importance in a military environment, many contend correctly that they are absolutely vital to the daily lives and welfare of their diners, a high percentage of whom are away from home and family for the first time. They say they feel directly responsible for the well-being of their diners, an attitude that would doubtless make many weary head chefs weep over their stock pots.

This spring, Starbucks announced plans to hire another 15,000 veterans and military spouses. This comes on top of the 10,000 it has already employed over the past three years, a commitment being promoted by the newly introduced camo coffee sleeves. The objective is to tap into their leadership skills and work ethic, and create a win-win for all parties. However, the company doesn’t specifically target military culinarians, which opens the window of opportunity wide for other enterprising restaurateurs to step up and hire cooks who will come into the kitchen with experience and motivation, but without a sense of entitlement.