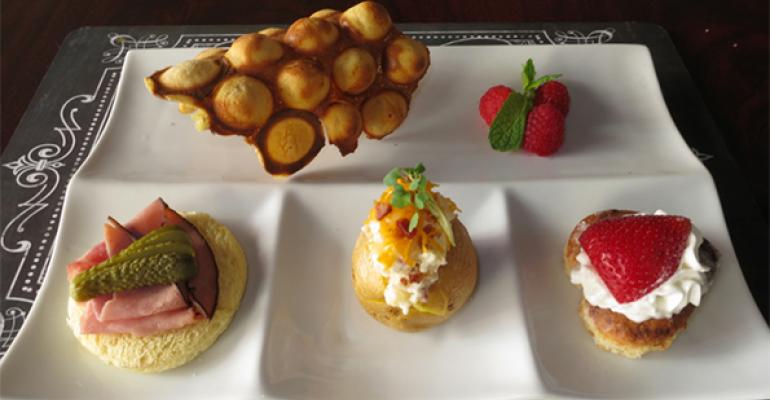 <p>The &quot;creffle&quot; is a a combination of a French crepe, a Belgian waffle and Hong Kong street food staple the eggette.</p>
Food & Drink>Food Trends

Customers still wait in long lines to score one of the 500 cronuts made each morning at Dominique Ansel Bakery in New York City. But some of these patrons may soon be sampling either of two new hybrid pastry options available nearby: the creffle—a combination of a French crepe, a Belgian waffle and Hong Kong street food staple the eggette—or the bruffin, a brioche/muffin combination billed as a “meal in a muffin.” They’re available, or will be soon, from a pair of new bakery/cafe concepts that will live or die based on the untested demand for these items.

The Creffle Cafe, located about a mile from Dominique Ansel Bakery on New York’s Lower East Side, opened in mid-September. It has a strong coffee component—beans are roasted on site—but the creffle-heavy menu is the focus. Plain, sweet and savory options are available.

Owner and creffle inventor Alan Tak says it took him “three months and over eight recipes to perfect the recipes to come up with a crispy outside and light, soft, fluffy center. It can be eaten plain, with sweet or savory toppings.” He’s not sharing his recipe, but creffles are a batter-based item made using a waffle iron similar to this one.

The plain creffle goes for $4.95 (cronuts sell for $5.00). An extensive list of toppings is available priced at an extra $.75 apiece. The Creffle Cafe also offers coffee and chocolate versions where the extra flavor ingredient is mixed into the batter, not added on top.

Savory options include a cheese and bacon creffle priced at $6.95. The meatball creffle (three of them with cheese and sauce) costs $10.95, and less-hungry customers can opt for a $3.00 meatball slider. A handful of non-creffle pastry choices round out the menu, but this concept will make it or break it on the strength of its creffle lineup.

It’s too early to tell how well this single-unit concept will do. But if you subscribe to the theory that restaurants have to offer something different from the competition, this one has a shot.

So does The Bruffin Cafe, two units of which will soon be open in lower Manhattan.

Here’s the pitch for the bruffin: “The Bruffin pastry is a light and flaky, brioche-like pastry filled with quality ingredients from around the world to give each one its exclusive character and taste,” the company’s website says. “It’s available in a diverse assortment of savory and sweet flavors.”

We’ll find out more about The Bruffin Cafe’s offerings this fall, when its first unit opens on Delancey Street in Lower Manhattan. A second will be located on Gansevoort Street in Manhattan’s Meatpacking District.

There should be plenty of patrons for both. Bruffin inventors Michael Bagley and Medy Youcef have already built a loyal following for their signature product via the food cart they run at weekly Smorgasbord events (a sort of flea market for high-end gourmet food items) in Brooklyn. Bruffins are already stocked by most Fairway Market (a NYC-based grocery story) locations.

The cafe menu will likely include most or all of the current Bruffin lineup. It features many more savory flavors (12) than sweet (4). Among the savory choices are the American (Buffalo white chicken, blue cheese and hot sauce); the Spanish (chorizo, manchego cheese and ancho chile); the Italian (pepperoni, pesto and parmesan) and even the Japanese (teriyaki chicken, scallions and sesame.)

New options for the cafe may include the Bruffin Lettuce and Tomato and the Bruffin Bowl, a bruffin floated in a bowl of French onion or tortilla soup.

Will this cafe concept work? It has several factors going for it, in addition to the novelty of the bruffin itself. The parent company aims to develop a good sideline business supplying “meal in a muffin” assortments to corporate and business clients. Also, the owners have already demonstrated they know how to use social media to stir up interest in their product, which was priced at $4 apiece in its early food cart days.

Both these bakery cafe concepts could fly in NYC. But would they work in other towns? Cronut founder Ansel is a high-end pastry chef, seemingly not interested in building out a cronut concept across the U.S. The people behind the creffle and the bruffin may well have more aggressive plans. Stay tuned.