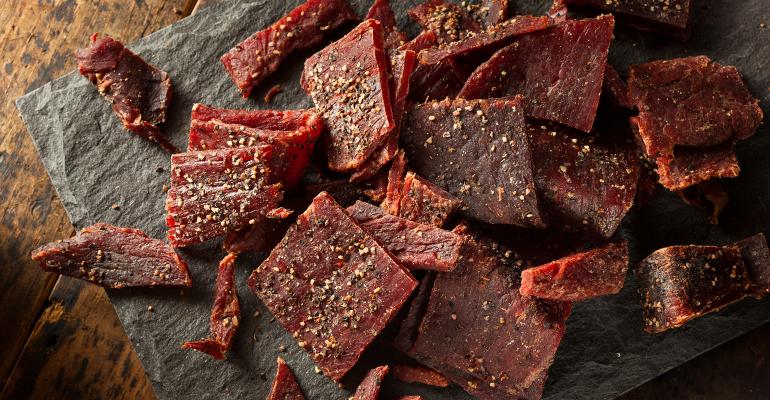 Jerky’s success offers something to chew on

One of the most unlikely product success stories of late has been the soaring sales of jerky, dried meat strips from which the fat and juices have been removed.

Its unlikely crossover from truck-stop staple to mainstream munchable represents a timely convergence of factors that would make an excellent case study for would-be MBAs. Snacking continues to grab share of stomach from conventional meals, and discriminating snackers want better-for-you nibbles. Their demand dovetails with overall consumer interest in protein, continuing concern and confusion over carbs, and the unflagging popularity of the Paleo diet. Combine these elements, shake well and you have a jerky juggernaut.

Like any good Cinderella marketing story these days, the transformation of jerky from lowbrow to high class involves a category disrupter, in this case Krave. Founded in California by a scion of Sebastiani Vineyards, Krave Jerky is positioned as artisanal, natural, culinary-inspired, minimally processed and gluten free — de rigueur attributes of the new wave of protein snacks. The Krave line comprises beef, pork, turkey and chicken options in trendy flavors like Chile Lime Beef, Honey Habanero Chicken and Basil Citrus Turkey Jerky, which come with beer- and wine-pairing suggestions and recipes for home cooks.

Meat snacks represented a $2.8 billion category last year, according to Nielsen, and saw 7-percent compound growth over the prior four years. NPD further reported that consumption of meat snacks has jumped 18 percent since 2010, as half of consumers believe that animal protein provides the highest quality protein. By and large, though, the impact of the jerky trend has been felt at retail, including dedicated specialists like Beef Jerky Outlet, which has 100 stores and is actively franchising, at one end of the spectrum, and Louisville Vegan Jerky Company, with its trendy small-batch, plant-based jerky and cheeky marketing, at the other.

Restaurateurs have been less enthusiastic in their embrace of jerky, perhaps put off by its conventional image of low perceived value. Nonetheless, a number have taken advantage of its raging popularity, like The Terrace Rooftop Bar in Chicago, which introduced a Vietnamese Papaya Salad with house-cured hanger steak jerky last summer, or nearby Roister, which offered Caribbean-inflected Jerk Jerky. Chefs at wildly popular The Purple Pig, another Chicago dining stalwart, have been known to send out pork jerky to placate antsy patrons lined up to await their tables.

On the East Coast, Edmund’s Oast in Charleston, S.C., prepares “Gin Joint-Style” Jerky, while on the opposite coast, San Francisco’s Third Rail Cocktail and Jerky Bar tempts diners with half a dozen varieties of beef or mushroom jerky. In Atlanta, 10 Degrees South specializes in South African cuisine and spotlights items like Biltong Carpaccio Caesar Salad with slices of biltong, or naturally cured beef jerky, popular in that country. The same owners operate Biltong Bar, a casual eatery promising beef jerky and booze in a busy downtown Atlanta food hall.

From the chain perspective, examples are few but notable, like the sexy Pepper Nitro with a Jerky Twist at Starbucks Seattle Roastery, which infuses nitro cold-brew coffee with malted fennel black pepper syrup, honey cold foam, cracked pink peppercorn, all topped with a skewer of grass-fed beef jerky. And Wayback Burgers concocted a special Jerky Milkshake made with vanilla bean ice cream and barbeque, maple syrup and hickory spice flavors, served with Slim Jim Sticks — a witty, protein-packed use of a throwback brand in a totally contemporary treat.