/sites/all/themes/penton_subtheme_restaurant_hospitality/images/logos/footer.png
Recent
Recent
How HumanKind Hospitality handled a freak ice storm on top of the pandemic
Feb 24, 2021
Flavor of the Week: Beer cheese, a spread with near infinite possibilities
Feb 22, 2021
Help could be on the way for California restaurants
Feb 19, 2021
5 Things: Guy Fieri launches his first ghost kitchen with Robert Earl
Feb 18, 2021
How Stone Brewing Co. is making convenience technology a personalized guest experience
Feb 18, 2021
Featured
Jose Garces launches two virtual brands, focusing on vegan burgers and Peruvian chicken, in Philadelphia
Feb 09, 2021
With Singapore giving the green-light to lab-grown meat, when will it hit American restaurants?
Feb 17, 2021
Five things: Will shopping malls become hubs for restaurant delivery?
Feb 09, 2021
Is your business what Danny Meyer is looking for?
Feb 08, 2021
Flavor of the Week
brought to you by
Food & Drink>Food Trends 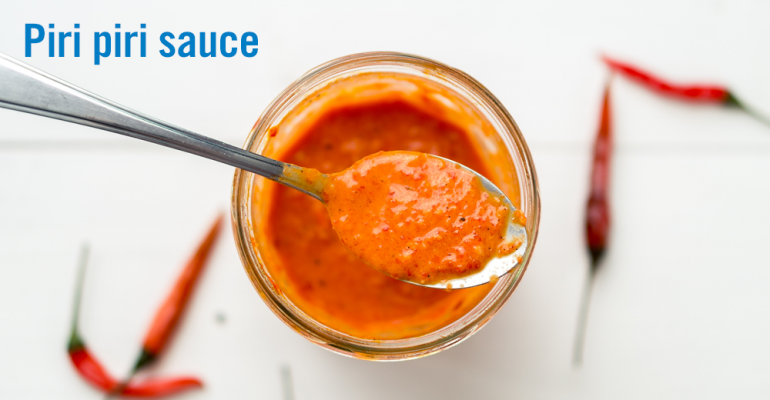 Piri piri sauce is a marinade or sauce made from the small, spicy piri piri chile as well as citrus, onion, pepper and herbs. It originated in Portugal and is common in many southern African cuisines. Piri piri is a complex sauce, with sweet, sour and salty notes as well as heat, and a roundness that comes from the onions and peppers in it. It's particularly popular with chicken. Awareness is still low among consumers, but its appearance on menus has grown 41 percent over the past four years.