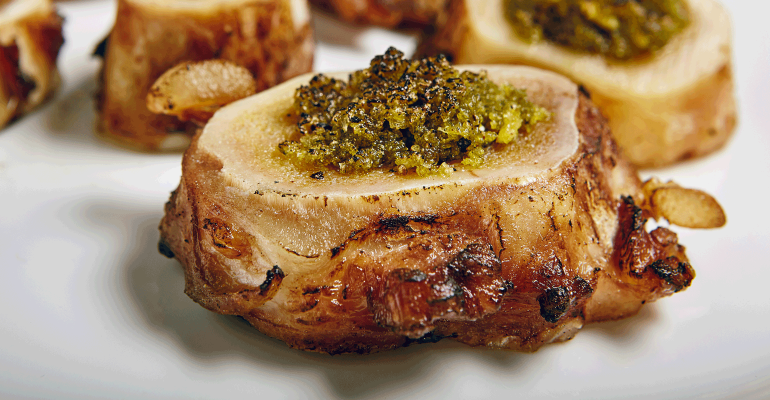 Chefs make the most of versatile bone marrow

If menu trends conformed to fashion trends, there’s no question that bone marrow would be the new black, as indispensable in the kitchen as a little black dress is in the wardrobe. It’s versatile, flatters whatever it accompanies and works well across a wide range of occasions. Bone marrow is definitely what well-dressed menus are wearing this season.

Bone marrow spruces up ethnic menus, too. Hanoi House in New York City suggests adding marrow bone to pho bac, Hanoi-style beef pho made with broth cooked for 16 hours. Cosme is also in New York and dishes up contemporary Mexican-inspired cuisine like uni tostada accented with bone-marrow salsa, avocado and cucumber. The Cookery in Dobbs Ferry, N.Y., specializes in modern Italian offerings like rigatoni with bone marrow, and at Monsieur Benjamin, a French bistro in San Francisco, marrow bones “Blue Ribbon” with bacon marmalade and country bread are on the hors d’oeuvres menu.

Tenderloin Trio w/ bone marrow butter, gorgonzola, au poivre. Why choose one topping when you can have three? #lunch pic.twitter.com/pJMhYefeqw

Dusek’s, a gastropub in Chicago, offers a marrow-y mash up of marrow-crusted New York strip with blistered shishito peppers, sauce soubise and red ver jus. And serious props should go to The Doughnut Project in New York City, which generates buzz and drives traffic with a special sweet-and-savory doughnut that is stuffed with bone marrow-chocolate pastry cream, topped with a bright clementine glaze and available only on Saturdays.

Nancy Kruse, president of the Kruse Company, is a menu trends analyst based in Atlanta and a regular contributor to Restaurant Hospitality. E-mail her at [email protected].