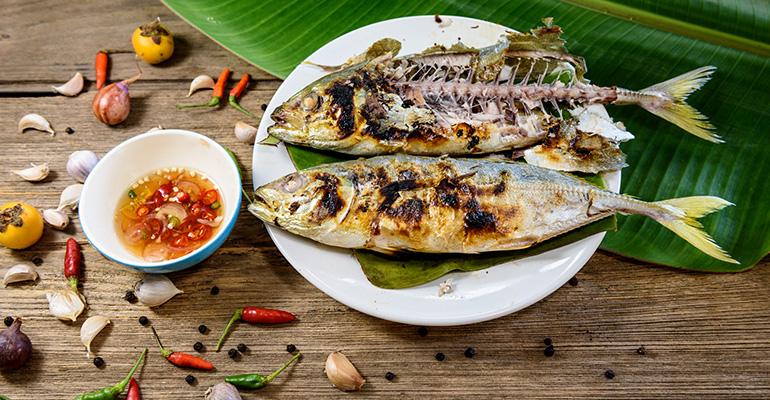 Salty and sweet varieties gain play on US restaurant menus

Many Americans are still squeamish about seafood, with their uncertainty relative to purchase, preparation and consumption of the stuff constituting a kind of culinary ichthyophobia, or fear of fish.

This condition may be more prevalent in the heartland, where major bodies of water are few and far between, and where true, briny bivalves are often supplanted by prairie oysters. While some consumers there credit Red Lobster and other casual-dining chains with removing the fear factor and making seafood approachable, they admit they’re still most comfortable with mild fish that tastes less like an ocean and more like a chicken.

They’d best fasten their seatbelts, then, for the arrival of nuoc mam, the fish sauce that is to Vietnamese cuisine what ketchup is to the American kitchen. Made simply from fermented fish and salt, it adds a real umami kick to dishes. The addition of water, sugar and lime yield its first cousin, nuoc cham, and both are getting more play on menus.

Most chefs here use the generic term “fish sauce” to signal their use, as with Two Boroughs Larder in Charleston, S.C., which tops salad greens with it. Asian Box, an eight-unit fast-casual operation in Palo Alto, Calif., offers an oil-free fish sauce for its rice and noodle bowls. The Greenhouse Tavern in Cleveland punches up Fish & Chip Dip with salt-and-vinegar chips and fish sauce. And the Vietnamese-style caramel corn at San Francisco’s Kitchenette SF is enough to make your head spin, with a combination of peanuts, chiles and fish sauce.

Speaking of corn, Banh Shop in Dallas puts Saigon Sauce made with coconut milk, butter and nuoc mam atop the Saigon “Street Stall” Corn Cup. The restaurant also uses nuoc mam vinaigrette as a salad dressing. And, speaking of caramel, trendy Staplehouse in Atlanta offers mussels with parsnip, celery and fish sauce caramel, a variant in which the fish sauce is combined with melted sugar for a sweet-and-savory condiment.

Something is definitely fishy in Chicago. According to research conducted recently by the Chicago Tribune, leading local chefs named fish sauce one of their 13 indispensable pantry ingredients. Chef Abraham Conlon of super-trendy Fat Rice extols its virtues in dishes of all kinds, and claims it even adds a funky zip to vanilla ice cream. A perusal of his current dessert menu turns up an even funkier Macau Rice Crisp that comprises pork floss, nori and fish sauce caramel. A few miles away, the menu at Girl & the Goat recently featured Grilled Cuttlefish with pistachio tapenade and herb nuoc cham.

In Texas, lucky Houstonians can enjoy a thoroughly modern mashup at Kitchen 713, where shredded turkey meat is wrapped in lettuce leaves and served with a side of nuoc cham that marries nuoc mam with Steen’s cane syrup, a legendary local ingredient.

Perhaps an indicator of product crossover, Red Boat, an artisanal Vietnamese fish sauce billed as first-press and extra virgin, is now available in the U.S. for chefs who want to add a dash of Vietnamese flavor their dishes. It certainly won’t displace ketchup or even seriously challenge the raging popularity of Thai Sriracha, but it may carve out a niche alongside Japanese togarashi and Korean gochujang.

Nancy Kruse, president of The Kruse Company, is a menu trends analyst based in Atlanta. As one of LinkedIn’s Top 100 Influencers in the U.S., she blogs regularly on food-related subjects on the LinkedIn website. Contact Nancy Kruse at [email protected].