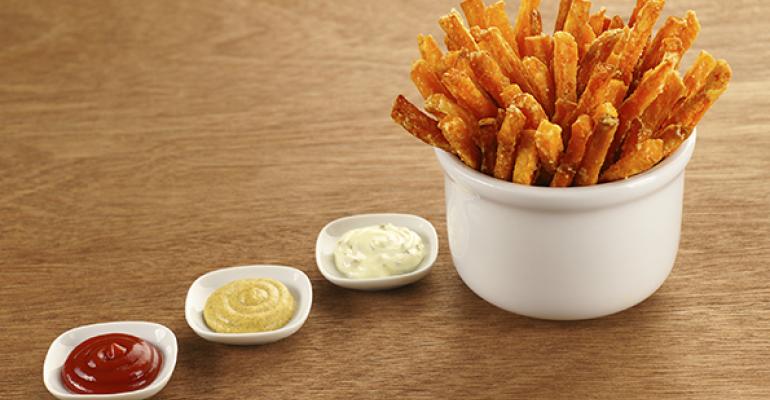 As cross-pollination of international cuisines continues to produce diverse meals, it’s interesting to see how some of the most memorable flavors come in the smallest portions. Center-of-the-plate items are important, but sometimes making dishes dazzlingly different comes down to a mere ramekin of sauce.

With no disrespect to the trinity of ketchup, mustard and mayo, common condiments don’t always cut it with customers seeking vivid flavors from heat, texture, aromas and exotic spices to add to sandwiches, sides, omelets, meats and vegetables. Chefs are delivering new flavors in dipping sauces and dressings that often can turn the dish’s sideshow into the plate’s pièce de résistance.

“People just want more flavor than what they’ve gotten all these years,” says Mike Remes, corporate executive chef at Burger 21, a 15-unit Tampa, Fla.-based chain. Instead of making signature sauces only for specific items, Remes says the company instead created a sauce bar to let customers make up their own savory solutions.

“We’ve got 10 sauces on our sauce bar, and people use them on everything,” he says. “And they can add or subtract sauces from whatever they order to get what they like.”

According to a recent MenuTrends report from Datassential, modern diners want an array of flavors they can use to broaden their palates over time. Researchers discovered that the use of unique food ingredients and diners’ desires to taste them progress along a path beginning with “inception” or introduction, moving to “adoption,” then on to “proliferation” on some menus and eventually “ubiquity” on many.

When those ingredients become extraordinarily popular, they often become baselines for sauces going forward, such as has happened with chipotle pepper. Not so long ago the ground, smoked jalapeño served in an unnamed supporting role. Now it is prominently featured in meat rubs, breading, spiced mayonnaise, salad dressings and even a popular chain name.

In fact, hot-and-spicy ingredients — hot sauces, harissa, habanero and paprika, among them — are some of chefs’ most common choices when seeking to enliven a condiment, according to the Datassential report.

“Bold flavors are prominent on menus today — smoked, pickled, sour, bitter and spicy — which are also reflected in trending cuisines such as Southern, Korean, Thai, etc.,” says Brian Darr, manager of custom research for Chicago-based Datassential. “Spicy ingredients and terms have grown continuously on menus over the past decade — jalapeños and chipotle have become standard offerings while habanero and serrano are the newer go-to flavors.”

But while hot sauces like Tabasco find wide application in today's diverse preparations, some chefs like Karrie Hills also are focused on creating condiments based on textures and unusual flavor combinations. As the executive chef of The Red Door Restaurant and Wine Bar and The Wellington Martini and Lounge in San Diego, she makes jams out of bacon, olives and fresh fruits to serve with her entrées.

“For the olive jam, sometimes I’ll use figs or apples to offset the briny character,” she says. “It’s not just one flavor, salty or sweet, either. I like to mix those up.”

“That’s mayonnaise based, and we add some Dijon mustard, honey and some gourmet syrups I can’t disclose,” Remes says. Once out of the fryer, the sweet potatoes are dusted in a mixture of sea salt, sugar and cayenne pepper. “There’s a tang to it, but also a nice little sweetness that evokes a memory of sitting around a campfire.”

At Falafill, a fast-casual falafel shop in Chicago, executive chef Maher Chebaro says his zough (pronounced “zoog”) sauce has become so popular with customers he bottles it and puts it on tables. Soon he plans to bottle and offer it for retail sale. Made from pureed jalapeños, cilantro, garlic, caraway, cardamom, lemon juice and olive oil, the sauce is squeezed on nearly everything in the shop.

“It’s really good on beans, fish and vegetables … and we like to push the cardamom forward in the flavor,” says Chebaro, who immigrated from Lebanon to the United States in the in 1970s. “It’s kind of like salsa verde, but with a lot of heat. It looks beautiful because the lemon juice fortifies the green, so it’s really bright and sexy.”