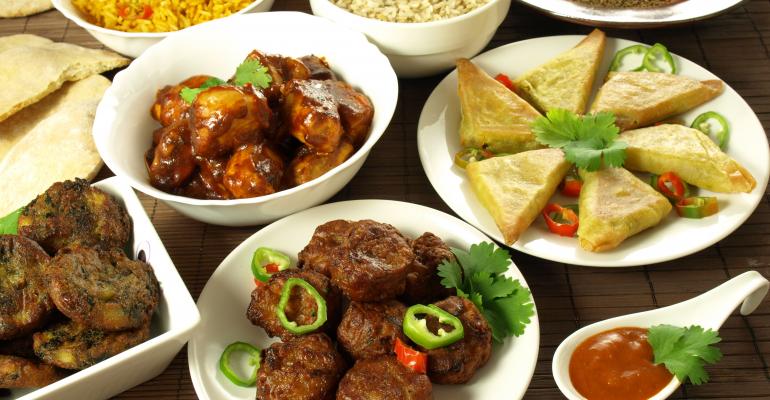 As Americans continue to demand adventurous culinary experiences when they dine out, a growing number of foodservice operators are looking to cater to this trend by offering more flavorful and authentic interpretations of ethnic menu selections.

The increasing sophistication of the American restaurant-goer is helping to fuel the expansion of foodservice operations showcasing a new wave of ethnic cookery that relies on specialized ingredients and preparations, and which produces more faithful representations of various global foodways.

Historically, American tastes have tended to been more cautious, Stensson continues. “But now [consumers] are interested in bolder flavor profiles, and a lot of ethnic cuisines tend to lean in that direction.”

Experts cite consumers' wide-ranging interest in all things culinary as a key driver in the shift toward more pronounced, more authentic ethnic flavors. They observe that

television offers the public literally scores of food, cooking and travel shows from which Americans are able to learn about fresh and prepared ingredients with which they may be unfamiliar. At the same time, the Internet and scores of cookbooks published each year readily provide further access to recipes and culinary information.

In addition, supermarkets across the country are offering ethnic food items that previously had not been available to the general public.

Candy Argondizza, vice president of culinary and pastry at The International Culinary Center in New York, agrees that Americans are “much more savvy. The customer has a much greater expectation, which in turn has raised the level for chefs and supermarkets that want to cater to this new trend.”

Technomic Inc.'s 2013 Flavor Consumer Trend Report found that 37 percent of consumers polled say they are more interested in trying new flavors than they were just a year ago. Only 11 percent indicate the opposite. At the same time, 41 percent of respondents say they are more likely to visit a restaurant that offers new or innovative flavors.

In a poll of nearly 1,300 chefs for its What's Hot 2014 Culinary Forecast, the NRA found that ethnic cuisine is top-of-mind for many professionals. Among the trends mentioned, the forecast says ethnic influences are being seen in the development of breakfast selections, appetizers, children's dishes, dips and fusion-style items. The use of ethnic flours, cheeses and condiments also was cited as a growing trend.

Experts point to a number of up-and-coming ethnic cuisines that are gaining a beachhead in the United States. The NRA's 2014 Culinary Forecast lists Peruvian and Korean cuisines at the top of the list. And emerging interest in those authentically prepared cuisines is not restricted to restaurants at the high end of the foodservice spectrum. For instance, Stensson says, food trucks are taking Peruvian menu items on the road in Washington, D.C.

Other Latin American and Hispanic cuisines are finding acceptance in the United States. In addition to regional interpretations of Mexican cookery — those of Oaxaca and Veracruz, for example — other cuisines like Spanish, Cuban and Colombian also are increasingly being presented authentically.

The push toward offering more ethnic menu items, in fact, is enabling chefs and restaurateurs to make deeper dives into the culinary foodways of other countries. Rather than simply offering more generic Chinese or Italian selections, many restaurants find themselves specializing in more specific regional cuisines like Cantonese and Szechuan or Tuscan and Sicilian. For example, Castellucci Hospitality Group plans to open Cooks & Soldiers in Atlanta’s this fall. The restaurant will explore the cooking of the Basque regions of Spain and France.

The forecast also cites various cuisines of Southeast Asia — notably Thai, Vietnamese and Malaysian — among the several hot ethnic cooking styles being offered in restaurants around the country. “There continues to be growing interest in Southeast Asian food,” Argondizza says. “Those flavors are warm and not hard to capture. They're all ingredient-based [and such items as] galangal, coconut milk and fenugreek open whole new flavor palettes.”

Indian is a cuisine that previously has had only a modest presence in the United States but is gaining ground, experts say. “You go to the U.K., and Indian food is everywhere,” says Nick Vojnovic, co-owner of the Little Greek restaurant chain. “It's definitely under-served here. Indian is on tap to grow here.”

Argondizza also points to the availability of specialty ingredients as an important component in the growth of ethnic cuisines. “In New York, we have incredible ingredients to work with,” she says. “So you can do an Indian dish as accurately as possible.”

The cooking of the Mediterranean region also continues to grow in popularity, with many operators choosing to focus on a particular country or even region of the area. Veteran restaurateur Vojnovic — who previously ran the Beef 'O' Brady's sports pub chain — has since transferred his energies to Little Greek Restaurant, the 18-unit fast-casual concept based in Brandon, Fla., that specializes in Greek cookery.

Vojnovic says customers are looking not only for new foods with different flavor profiles, but they also are interested more in healthful dining options, and the Mediterranean region “hits that sweet spot.” While Little Greek's menu contains certain Mediterranean elements, he explains, it is predominantly Greek. Best-selling dishes include a gyro pita, made with 90 percent ground beef and 10 percent ground lamb; a Greek salad topped with chicken; and chicken souvlaki, or chicken roasted on skewers. He says to achieve the desired level of authenticity, all selections are made from scratch and several require a substantial labor investment. For instance, Little Greek's dolmades — stuffed grape leaves — requires a 17-step process and nearly two hours of prep time.

There are, of course, challenges to expanding certain ethnic restaurant concepts. Vojnovic points out that consumers are not always familiar with the cooking of a particular region or country, and that some need time to familiarize themselves with the food. “The learning curve can be a challenge,” Vojnovic says.

At the same time, he cautions that supplying hard-to-find ingredients in certain locales can be difficult as well. For example, procuring fresh feta cheese presented a supply challenge for Little Greek in one marketplace, he says.

In fact, Stensson advises restaurateurs opening authentic ethnic outlets not located on the coasts or in urban areas to research flavors that might not be familiar to area diners.

Despite the challenges, however, experts say that global cookery is only expected to grow in popularity here. At L'Ecole, the public restaurant of the International Culinary Center — which was founded as the French Culinary Institute — the menu offers many ethnic dishes, including asparagus custard with chorizo and almonds in sherry brown butter, and arctic char with curried yogurt, cucumber and carrot dill vinaigrette.

“Americans are growing much more experimental and willing to try new things,” Argondizza says. “There is just more attention to different cuisines.”