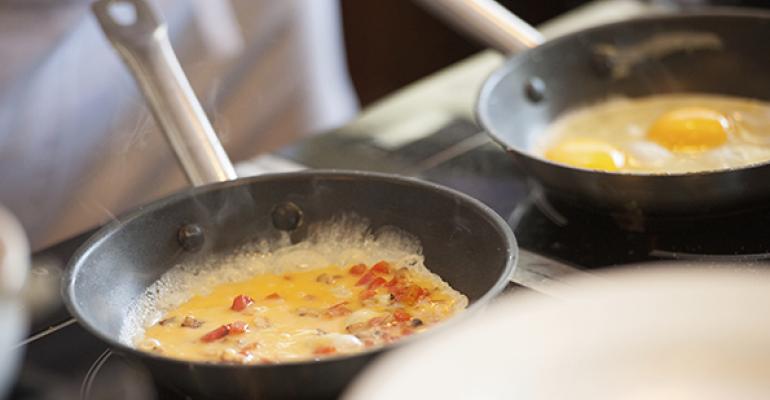 Consumers’ penchant for spice is giving new meaning to the phrase “hot breakfast.”

“People are eating more spicy foods than they did 10 years ago,” says Robert Maynard, co-founder of Toast Café, a breakfast, brunch and lunch concept started in Huntersville, N.C., that now has four locations and plans to open new franchised units this year.

One of the top sellers at Toast Café is the Southwestern Chorizo Omelet with bell peppers, tomatoes and cheddar cheese, Maynard says. And even though the dish is already spicy, some customers ask for extra jalapeños in the omelet and reach for the hot sauce bottle on the table.

Foodservice industry analysts had predicted spicy foods would continue as a trend into 2014, driven by the influence of a growing Hispanic population in the United States, as well as more consumer demand for bolder, spicier and adventurous flavors. Spice and heat traditionally may be employed more in lunch and dinner, but breakfast has become an opportunity for restaurant and foodservice operators to capitalize on the trend.

“Heat is more appealing as the day goes on, into the evening and even late night,” says Darren Tristano, executive vice president of Chicago-based foodservice research firm Technomic Inc. “But adding heat to anything is trending positively. We already see the Tabasco sauce and ketchup on the breakfast table, so there is a lot of opportunity there.”

The success of serving grits, a typical breakfast item, for dinner inspired Sarah McDonnell, executive chef of Trellis restaurant in Chicago, to create a chorizo and grits dish for the weekend brunch menu.

Trellis, a restaurant-bar owned by the Four Corners Tavern Group, began serving brunch in December. The 72-seat dining room fills up consistently every weekend, she says.

“I have grits on the dinner menu and they always sell out,” McDonnell says. “I wanted to transition the dish to brunch but not do the typical shrimp and grits.”

McDonnell turned to spice. The chorizo is a Spanish-style sausage, often made from pork — with bell peppers and shallots. Most of the heat in the dish comes from the pepperoncini tomato sauce, which is poured over the creamy grits and the chorizo that is then topped with cooked eggs.

One of the best sellers for brunch also is a spicy biscuit and gravy dish — the Jalapeño & Fontagio Biscuit. The recipe calls for fresh, raw, minced jalapeños and Wisconsin Fontagio cheese, which is a blend of fontina and Asiago cheeses. The jalapeños and cheese are folded into the biscuit dough and baked. The biscuit is topped off with a pork sausage and traditional gravy sprinkled with chile flakes.

“It has some heat but it is not overpowering,” McDonnell says. “It’s approachable. Customers are looking for a little heat with their eggs.”

A desire for spice often is a way for health-conscious consumers to enjoy food that may otherwise be bland, says Ed Ancewicz, chef for the Gulf States and Puerto Rico region of Eurest. The contract foodservice company serves business and industry clients in states that border the Gulf of Mexico.

“People try to eat well, but wellness items do not always taste good,” he says. “But you can add spices to it. A little spicy sausage goes a long way in flavor without compromising the integrity of the food.”

Breakfast foods and spices have lower food costs, making the early morning daypart even more desirable for operators, Ancewicz adds. He has incorporated quite a lot of chiles in rubs and seasonings along with jalapeños and habanero chiles. Fresh peppers are easy to acquire locally almost year round in the region. Chorizo and other pork products like spicy andouille sausages also are relatively inexpensive. Ancewicz spices up a purple potato hash with chorizo.

Spicy foods are particularly popular in Florida and Puerto Rico markets, he says.

The Taco John’s burrito combines scrambled eggs with a savory chorizo sausage, jalapeños and spicy salsa. Breakfast now account for 7.5 percent to 8 percent of menu sales for the franchised restaurants.

“There has been a lot of attention on breakfast in the last year in the industry,” Waara says. “In our consumer research, consumers want a breakfast that is tasty and flavorful and a break from the normal routine. Our goal was to innovate and give a kick to someone’s morning routine.”