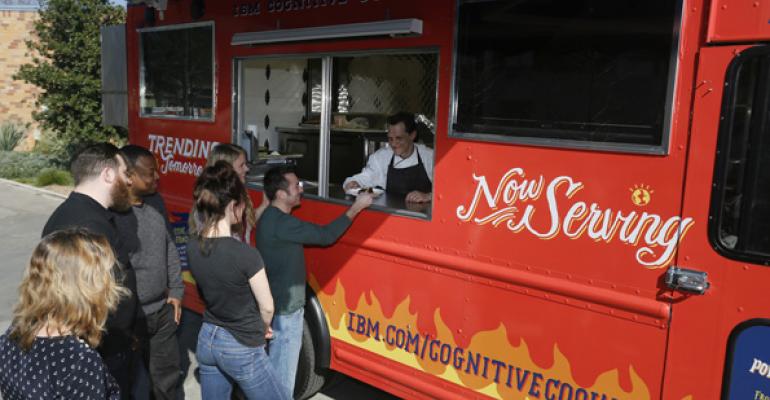 <p>IBM&#39;s food truck intends to show the world that a supercomputer can do more that sift data.</p>
Food & Drink>Food Trends

To demonstrate a supercomputer&rsquo;s ability to generate new things, not just analyze existing ones, IBM&rsquo;s &ldquo;Watson&rdquo; heads into the kitchen&mdash;and it&rsquo;s sharing recipes with you.

The food truck segment has long been a refuge for culinary renegades, off-the-wall concepts and seemingly wacky food combinations. But it’s never seen anything like the IBM Watson food truck, which could recently be found serving Austrian chocolate burritos to hipsters at SXSW in Austin, TX.

The truck’s purpose is to show the world that a supercomputer can do more that sift data. IBM argues that when the proper algorithms are applied to carefully chosen data sets, Watson can come up with highly creative recipe ideas. This is menu engineering of the most coldly technical sort. Yet the food turns out to be a lot more fun than the the process used to create it would lead you to believe.

Now it’s tackling food in collaboration with the Institute of Culinary Education (ICE). ICE chefs execute the recipes Watson dreams up and serve them out of the truck at high-profile events. Among those doing the cooking: 2007 James Beard Award Outstanding Pastry Chef Award winner Michael Laiskonis, Real-world feedback from food truck customers gives Watson’s handlers a read on how well recipe development is going.

Later in this story, we’ll get to how restaurant owners can access some of the recipes Watson creates. But first, here’s how IBM describes this project:

“Why food? We tend to think of food and cooking as an art but in fact, there’s a massive amount of chemical and neural science that underlies a great dish. IBM’s cognitive cooking system can reason about flavor the same way a human uses his palate.

“At the heart of this cognitive cooking system are a set of algorithms that draw upon a number of datasets, regional and cultural knowledge as well as statistical, molecular and food pairing theories to come up with dishes that are high in surprise, pleasantness and pair well. The system begins by capturing and analyzing tens of thousands of existing recipes to understand ingredient pairings and dish composition, and which it rearranges and redesigns into new recipes. It then cross references these with data on the flavor compounds found in ingredients, and the psychology of people’s likes and dislikes (hedonic perception theory) to model how the human palate might respond to different combinations of flavors.

“What appears as a list of ingredients for a novel and flavorful meal is actually the result of a system that intelligently generates millions of ideas out of the quintillions of possibilities, and then predicts which ones are the most surprising and pleasant, applying big data in new ways.”

You can see the results of this process for yourself by heading to IBM’s recipe archive.

There you’ll find recipes and thorough cooking instructions for six dishes: Austrian Chocolate Burrito; Caribbean Snapper Fish & Chips; Vietnamese Apple Kebab; Swiss-Thai Asparagus Quiche; Turkish Bruschetta; and Caymanian Plantain Dessert. Each is the result of some serious brainpower, supplied both by Watson and the ICE chefs, and has been road-tested on the truck. One or more could work well as short-term specials especially if your restaurant draws a tech-savvy crowd.

Should anyone fear the arrival of supercomputers in the culinary world? Chefs might.  IBM seems to suggest its big data approach might turn working chefs into mere technicians, relegated to bringing Watson’s ideas to life instead of thinking up new dishes of their own.

“Given the numerous different combinations of possible ingredients out there, it’s impossible for a human to imagine and reason about them all,” the company says on its website.”Because while we humans really are gifted with intuition, we have trouble thinking about large numbers of possibilities. Good chefs can think in pairs of ingredients, and even the very best can only juggle three ingredients successfully.”

Not many in the restaurant world would agree with this statement. Watson may turn out to be a powerful tool for menu planning and recipe creation one day; in the meantime, go ahead and trust your gut when performing these key functions now.

You can find out more about IBM’s cognitive cooking project here.