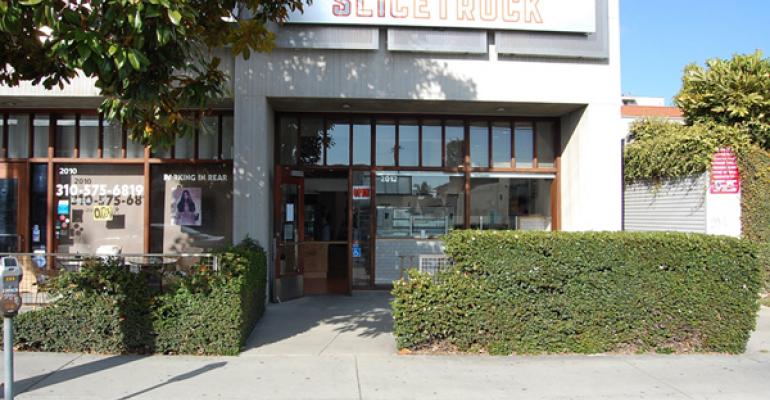 Few operators have taken a food truck brand further faster than the brothers who run SliceTruck in L.A.

If you’re one of the many people who see a food truck as the first step toward permanent restaurant ownership, you should get to know Dave and Chris Hanley. They’ve taken their pizza concept from food truck to brick-and-mortar restaurant to beyond in just three short years.

The Hanley brothers scored a big hit with their pizza wagon SliceTruck, which first hit the road in Los Angeles back in 2009. Just two months ago, they opened their first permanent location, SliceTruck the Restaurant. Out of that they’ve developed a dandy pizza delivery business. Now they’re revving up the catering side of their business, with both the brick-and-mortar restaurant and the truck available for duty, depending on the size of the gig.

If you’re wondering how to leverage a food truck brand into a bigger business, the Hanleys are two guys to emulate. Note that they weren’t daydreamers who thought that simply having a truck and serving some cool food out of it would be enough to get by. Instead they were and are committed to serving the best possible product. It’s the key in a crowded segment like pizza, where customers can choose from among hundreds of options.

Here are the Hanleys' thoughts on pizza quality as posted on their blog. It’s worth a read.

“We’ve spent a lot of time thinking about this and the order of importance for a pizza goes like this:

“Crust is the most important, requires the most effort and is most commonly bad. It’s because of the three factors that come into play for this component, the dough recipe, the proofing time and the style that the pizza is cooked. If only one is missed, the crust won't be right.

“Sauce is the second most important and is the second most commonly bad for a few reasons, mainly because it is cheaper and quicker to doctor up some pre-made sauce but also because there are a bunch of dumb ideas/secrets/shortcuts swirling around about how to make sauce.

“Out of the three, cheese is the least important because it’s the easiest to do right. All you need to do is ante up and buy good cheese. A LOT of places cover up a crap pizza with good cheese and think they're doing everyone a favor. (The idea of covering some garbage food up with cheese is extremely common and actually goes far beyond pizza and doesn't even require good cheese.)

“If we had the choice to eat a pizza with great sauce, great crust and a lower quality mozzarella or great quality mozz with poorly executed sauce and crust, we'd say it’s a no-brainer and go with the first option.”

To that end, SliceTruck is putting its money where its mouth is. Crusts are made using kamut flour, a costly organic ingredient derived from ancient grains. The product produces a superior crust, the Hanleys say, and SliceTruck is the first operation in the country to use it.

Quality costs, but the price of a slice is the same ($3) whether purchased off the truck or at the restaurant. At the restaurant, whole pie prices are slanted toward the high end of the market. SliceTruck the Restaurant sells large (14-inch) pizzas for $14, with additional toppings costing $3 each, while 18-inch extra-large pies go for $20, with each additional topping costing $4. An extra-large BBQ chicken pizza costs $29.

One thing the SliceTruck experience gave its owners was a sharp sense of where its customers come from. Their chosen location for a permanent store is a sweet spot in West L.A. surrounded by Santa Monica, Culver City and the UCLA campus.

We don’t know where the SliceTruck venture will end up, but the Henley Brothers have definitely made the most of the opportunities a food truck can create so far. They’ve covered all the bases and have multiple revenue streams flowing from their allied operations. If you’re thinking of starting a food truck business of your own, keep an eye on where SliceTruck goes next.