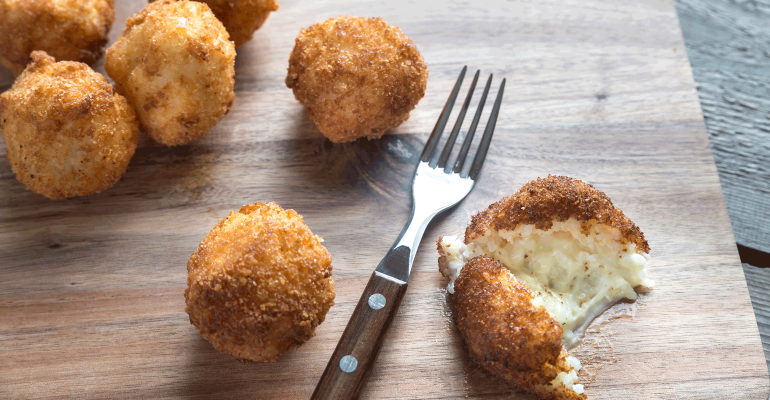 Arancini bubble up as versatile appetizer

The rise of the appetizer, the familiar small bite that often works hand-in-glove with beverage consumption, precisely paralleled the rise of casual-dining chains. Referred to as “fern bars” back in the day to reflect the foliage that was intrinsic to their decor, brands like TGI Fridays and Bennigan’s introduced Baby Boomers to the delights of shareable, moderately priced and tasty items like baked potato skins and fried cheese sticks to accompany their Harvey Wallbangers. In the decades since, while breaded cheese sticks may have been eclipsed by nachos and both have been outshone by chicken wings, the popularity and profitability of the category endures.

If consumer demand for appetizers in this country can be measured in decades, the lifespan of one particular fast-growing item that is making waves on appetizer menus can be measured in centuries. Arancini, stuffed rice balls that are breaded and fried, are said to have originated in Sicily in the 10th century. Their name means little oranges, which reflects both their shape and their color as they come out of the fryer. Datassential reports that arancini grew a whopping 119 percent on menus last year, and while some operators stick with the standard, others use it as a jumping-off point for trendier takes.

Classic approaches. Restaurateurs who are most likely to offer a straightforward version of the dish typically specialize in Italian cuisine. That’s the case with Osteria di Mare in Atlanta, where fried risotto balls are stuffed with mozzarella and wild mushrooms, then plated with charred tomato sauce. It’s also true for Maggiano’s Little Italy, which features Crispy Pepperoni Risotto Bites with marinara sauce, and Carrabba’s Italian Grill, which stuffs its arancini with Italian fennel sausage, red bell peppers and Romano cheese.

Animale, which touts its authentic Italian cuisine in Chicago, steps outside the box a bit with Saffron and Gorgonzola Arancini. The rice balls come with a side of Calabrian chile-ranch dressing. Also in Chicago, Monteverde scores with ‘Nduja Arancini served in a sauce of creamy olive oil-poached tuna purée.

Trapizzino in New York City, the first outpost of a concept imported from Rome, dishes up both its namesake pizza-based wrap sandwiches and a long list of supplì, the Roman version of arancini. The 14 options include flavor combinations typically associated with pasta, like carbonara, cacio e pepe and spicy arrabbiata. Less familiar to diners here are Coda alla Vaccinara Arancini made with oxtail ragù, celery and red wine sauce, and Broccoli e Alici Arancini, made with broccoli, mozzarella and anchovies. Contemporary interpretations. Other operators use the archetype as inspiration for distinctly nontraditional versions, like Mizuna Restaurant and Wine Bar in Spokane, Wash., where the Spinach Arancini with parmesan, pecorino and walnut pesto appears on its vegetarian menu. Similarly, the bill of fare at Modern Love, which boasts “swanky vegan comfort food” in its locations in Brooklyn, N.Y., and Omaha, Neb., describes its arancini as herbed, breaded risotto balls with sundried tomato-almond “cheese” and spicy marinara. By contrast, Atlanta’s Double Zero goes with a meat-centric Smoked Brisket Arancini with cheddar, mushrooms and honey-truffle aïoli.

Nearby Cakes & Ale takes a more restrained approach. Its popular arancini, made with pecorino cheese and enlivened with lemon, lime and orange zest, are a standout snack.

Because rice is a universal grain, it isn’t surprising to see ethnic variations on the arancini theme. At Grace & Grit in Charleston, S.C., Low Country Arancini are made with local red rice, house-smoked sausage and spicy herb buttermilk. The Coconut-Cashew Arancini served with green curry and tomato chutney at Tapestry in New York City reflected the restaurant’s theme: Global Plates, Indian Spices. And The Peached Tortilla in Austin, Texas, has created a menu based on Southern comfort food with Asian flair, an example of which is Kimchi Arancini Balls with wasabi, Sriracha aïoli and roasted nori.

Washington, D.C.-based Taylor Gourmet, which operates 18 units and is known for its innovative sandwiches, also gets creative with arancini. Risotto Balls, listed on the menu as Plus Ones, change with the season. The current winter offering combines roasted butternut squash with sage, caramelized onion and mozzarella served with cranberry dip. It’s worth noting, however, that the Risotto Balls on the chain’s permanent menu are simply stuffed with mozzarella and accompanied by marinara dipping sauce, a clear throwback to yesterday’s mozzarella sticks, albeit in a slightly altered form and sans the Harvey Wallbangers.