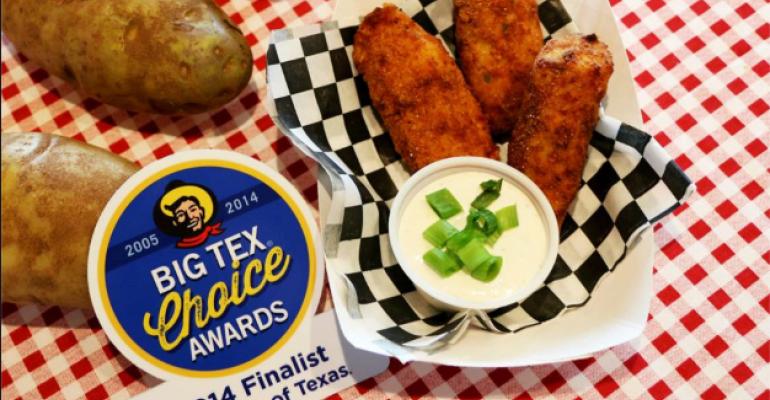 <p>The Chicken Fried Loaded Baked Potato is expected to be a hit at the Texas State Fair in September.</p>
Archive

Late summer and early fall are prime time for state fairs and the anything-goes food culture that’s become part of the fair-going experience. You’ll always find an overabundance of deep-fried and bacon-wrapped offerings up and down the midway. But each year produces a handful of new items that show evidence of genius-level culinary—or at least marketing—savvy.

Restaurant operators may want to think of fair food as test-marketing you don’t have to do, particularly for calorie-laden items that might work for a bar menu or food truck. Here’s what was and is catching the most attention at state fairs this year.

The just-concluded Minnesota State Fair, ranked as the top fair in the country on many lists, had an abundance of new food choices for 2014. Items that could find potential use in traditional restaurants include deep-fried pretzel-coated curds; gluten-free beer-battered bratwurst; and chicken in the waffle, made with buffalo chicken pieces that are fried, combined with gravy, poured into a waffle cone and garnished with cilantro. A beverage option that could be worth a shot: beer gelato.

Mid-August’s Iowa State Fair offered its usual array of heart-stopping food this year and customers could also choose from no fewer than 70 food options served on a stick. Molecular gastronomy of a sort was practiced by vendors who served fried Kool-Aid and fried beer. The fried guacamole bites seem like a concept that could catch on in restaurants and bars.

But the Iowa fair also ran a contest to select the best value-priced (under $3) item. A chocolate-glazed funnel cake stick won, but another entry held appeal for customers not interested in deep-fried or bacon-wrapped anything: Caprese Salad-on-a-Stick, a skewer of cherry tomatoes, fresh basil and mozzarella cheese dressed with balsamic vinaigrette.

The Texas State Fair doesn’t open its gates until late September, but organizers have already anointed 10 new food items as worthy of note. Among the finalists for this year’s Big Tex Choice Awards for best new foods are these dishes, which seem tailor-made for certain restaurant situations.

• Chicken Fried Loaded Baked Potato: “The creamy and moist insides of a baked potato, loaded with generous amounts of butter, bacon, and cheddar cheese, are coated and battered with a delectable blend of spices and flour that create a perfect combination of fried crispy crust and delicious, creamy loaded baked potato. Served with a ranch dipping sauce.”

• Fried Gulf Shrimp Boil: “Everything you would expect in a shrimp boil rolled into a ball, dusted with Louisiana Fish Fry seasoning and fried to a golden brown. Baby gulf shrimp, diced red potatoes, onion, lemon, and seasoning are formed around a cocktail shrimp, dusted and fried with the tail sticking out for a handle. Served with a remoulade sauce.”

• Fried Sweet Texas: “It starts with fresh pie dough filled with crunchy pecan pie, juicy peach cobbler, and creamy buttermilk pie. It is then deep fried until the crust is golden brown and flaky, and then served up with a side of Texas’ own Blue Bell Vanilla Ice Cream.” Another finalist is a beverage. Operators looking to add something unique to their beer list should take note of Original State Fair Brew’s Funnel Cake Ale. Patrons can have the rim of their cup coated with powdered sugar if they prefer.

From a restaurant operator’s point of view, state fair food innovations give an idea of what customers are willing to try, at least when their dietary guard is down. Some fair food items are downright silly (our candidate: deep-fried bubblegum), but a few of the others could be made to work in certain restaurant situations. Keep state fair food in mind the next time you’re looking to give your menu some zip.