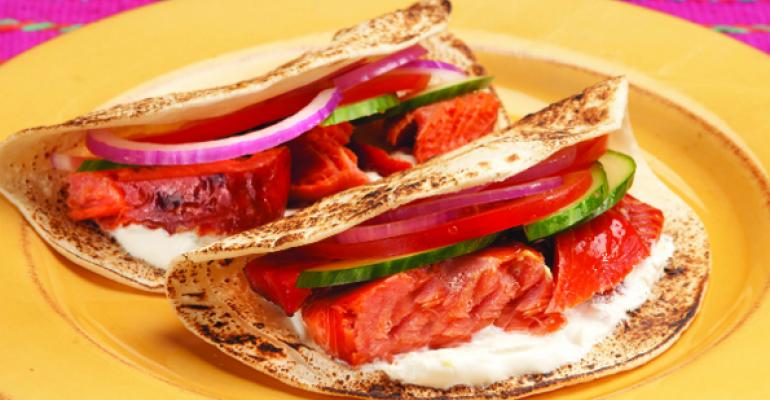 Looking to stay on top of your game? Read on. More restaurant trends: &bull; Latest gastropubs lean toward the classics &bull; Meet the new stars of street food 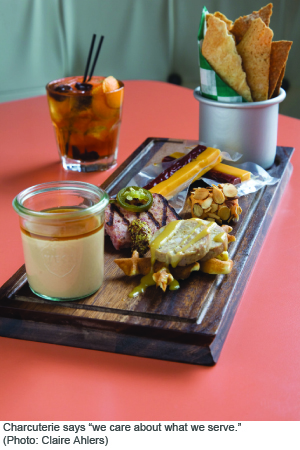 Food experts, like fashionistas, love to predict next year’s hot fads. Maybe you can take a fad to the bank, but not for long. Our forecast is based more on reality, observation and statistics than on a bid to grab headlines. We expect these trends to transcend fad status and have staying power.

Historically, menus at microbreweries have been an afterthought. But that attitude won’t cut it now. Americans have grown more serious about their beers, and shrewd restaurants are elevating the food to match.

For at least five years, every trendspotter has confidently predicted that Peruvian would be The Next Big Thing, although we’re still waiting to see whether Peruvian will play in Peoria. But when L.A. Weekly publishes a list of “15 great Peruvian Restaurants in Los Angeles,” it would appear that Peruvian has truly arrived. Lima-born Ricardo Zarate, the revered chef behind Picca and Mo-Chica (two of the 15 in L.A.), says he’s not surprised it’s taken this long to catch on.

“Peruvian food underwent 500 years of fusion, so it took a long time for it to be ready to export and introduce to the rest of the world,” he observes. “It’s going to be huge because it’s a whole new profile of flavors.” 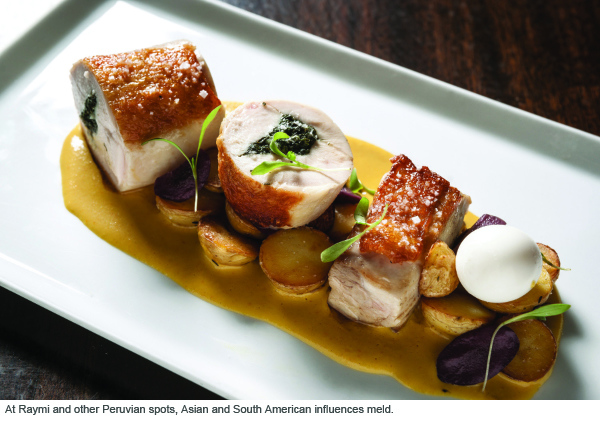 In New York, Richard Sandoval recently opened Raymi, his first Peruvian restaurant, with consulting help from Jaimie Pesaque, a Lima-based chef. A ceviche bar is the focal point of the restaurant, and the bar features all 10 brands of Peruvian pisco that are available in the U.S. as well as 30 house-made seasonal pisco infusions.

For meat-loving guests, charcuterie plates embody a taste of heaven. Once limited to a narrow sliver of restaurants, these house-cured delicacies are popping up all over the place. Why now? It could be a reflection of soaring commodity costs, paired with stable labor costs. Technomic says the combination has resulted in more in-house prep.

In Minneapolis, Uptown Cafeteria presents a retro-themed take on the genre. The $12.95 selection includes chicken pâté and waffles; a house-made version of Spam; a pimiento cheese ball and a smoked beef stick and cheddar snack pack, all served with house-made flatbread crackers.

Public Kitchen & Bar in Los Angeles offers a different charcuterie assortment every Thursday night. Diners can choose from imported items along with house-made chicken liver terrine, Jamon Serrano, duck prosciutto and other items, at price points ranging from $12 for one item to $23 for a combination of five. 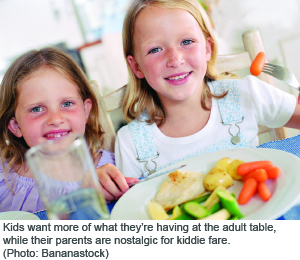 A curious thing is happening with kids’ menus: they are growing up. And the reverse is true—some menus designed for adults cater to the kid in all of us.

NPD Group recently found that kids’ meals with toys are no longer a big deal for their target audience. “Kids are different today than they were a decade ago,” suggests Bonnie Riggs, a restaurant industry analyst for the company. “They want to grow up fast and don’t want to be thought of as kids. Moms are also more concerned with the foods that their kids are eating,” she adds.

At the other end of the spectrum, adults are happy to revisit their childhood with choices like deconstructed s’mores, upscale mac ‘n’ cheese, faux TV dinners, lunches served in actual lunchboxes and other nostalgic fare.

Superfoods may not be the most glamorous category, but restaurant goers are embracing them at spots throughout the country, particularly on the coasts.

In Dallas, Preston’s American Grill touts a menu dotted with superfoods, indicated by a superman-style “S” on the menu. The chef uses ingredients like almonds, grapes, heirloom tomatoes, quinoa, black lentils and turnip greens to boost the average nutritional profile of menu choices.

One caveat remains: Consumers say they want to make healthier dining choices, but they are reluctant to pay more for those choices. NPD Group says 70 percent of consumers—more in the 50+ age group—do not expect to pay more for healthier items than they do for other menu items. On the other hand, younger adults seem more open to the idea. Some 41 percent say they would expect to pay a bit more. “The market for health today is growing and there is a good opportunity for operators who find a way to offer healthier options at lower price points,” NPD’s Riggs says.

More owners are waking up to the notion that the bar or lounge area is not just an afterthought, but an important element in the design, and a place where an increasingly casual audience wants to park for the night.

Hand-crafted cocktails, beer cocktails, batch cocktails, traditional world quaffs, scratch-made sodas and other beverages are turning up everywhere and the demand for this kind of creativity shows no sign of abating. Expectations about bar food are elevated, too.

At Manresa, David Kinch’s temple to terroir in Los Gatos, CA, a lounge was the focal point of a recent expansion project designed to take the restaurant to the next level. The lounge allows Manresa’s guests to enjoy a cocktail and relax before dining and a fitting transition from the outside world to the dining room.

With foraging taking off in American restaurants and the proliferation of meatless Monday-style promotions, produce is the latest darling of many menus. The new role models in the food world are not those who create mouth-watering meat dishes, but rather those who seek out heirloom varieties from local farms (or forage for their own wild ingredients) and cook items within hours of being picked. Anyone can roast a chicken, but raising the profile of items once relegated to the periphery of the plate takes some finesse.

American chefs abandoned “Continental” cuisine several decades ago in favor of contemporary American regional styles of cooking. But now more restaurants are turning back to Europe for inspiration. A recent culinary trend mapping report from The Center for Culinary Development found that a number of more traditional Old World flavors are making their way onto menus here: beer and bratwurst, smoked fish with dark, hearty breads and schnitzel with spaetzle, for instance. Americans have imported the gastropub model and made it their own, but many gastropubs rely on pork-based menus and items with a distinctly Old World appeal.

“We see Americans grabbing hold of the flavors and traditions of these culinary stalwarts and bringing them into the 21st century food landscape,” says Kimberly Egan, c.e.o. of the center. ”From schnitzel food trucks to the wave of craft beer gardens popping up in city after city, we are clearly reclaiming or embracing the culture and traditions of these Old World nations and refreshing them as our own.” 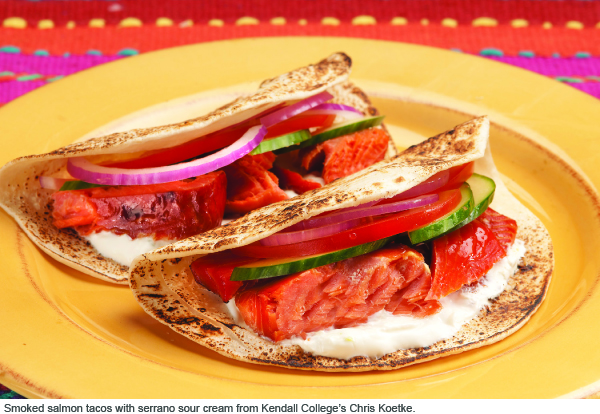 Food trucks continue to influence choices on the plates at bricks-and-mortar restaurants, understandably so. If customers are willing to follow mobile restaurants and endure lines to taste the day’s menu, obviously that is something worth emulating.

Fish tacos, popularized in Southern California and taken to the next level by taco trucks, are a perfect example of how food has traveled from trucks to restaurants. Asian-style grilled skewers are turning up at izakaya- and yakitori-influenced restaurants from Chicago to San Francisco. And barbecue has traveled from the backyard and the fairground to mainstream restaurant chains. A Technomic study found that more than 63 percent of the top 500 restaurant chains offer barbecue as a flavor, ingredient or preparation style.

10. Burgers get even better.

Every year burgers top the list of most popular menu items, and there seems to be no end in sight. For burgers, the future is trending toward premium ingredients and toppings.

The list of chefs who have opened their own burger spots—Michael Symon, Laurent Tourondel, Richard Blais, Hubert Keller, Bobby Flay and Emeril Lagasse, to name a few—is long. The draw? Ease of operation and profitability. Keller told the Wall Street Journal that his Las Vegas Burger Bar rakes in 35 percent profits, compared to 9-12 percent at one of his pricey fine dining temples. Shake Shack, a Danny Meyer concept that started expanding beyond its NYC home base, is a prototype for many developers looking to cash in our healthy appetite for burgers.