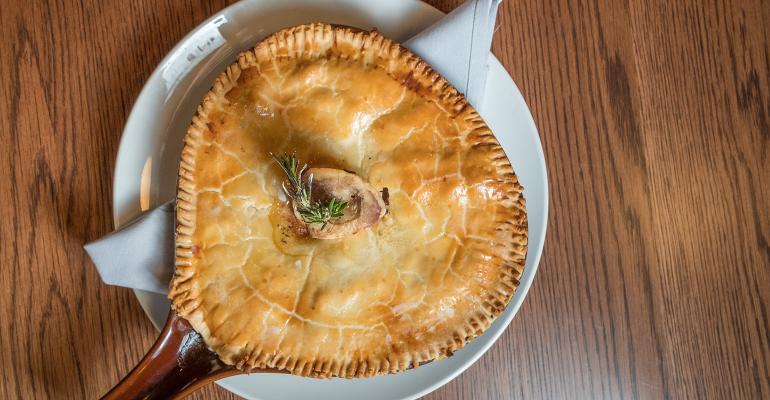 Savory pies, in a pan, handheld or smothered in mashed potatoes maintain their enduring appeal

Chefs put new twists on the ancient concept of meat-filled pastry, sometimes even making them vegan

Archaeologists can trace pot pies to the Neolithic Age, which makes them roughly 12,000 years old and a sure-fire candidate for the world’s oldest comfort food. While insight into their preferred varieties and prep techniques are lost, our stone-age ancestors were clearly onto something with their ageless combination of meat-filled pastry.

Tried and true. While hardly Neolithic, Fraunces Tavern in New York City has a storied history of its own that dates back centuries as a gathering place and source of sustenance to American revolutionaries. The current menu features contemporary options like the Short Rib Porter Beef Pie, which can be topped with either mashed potatoes or puff pastry, and the Slow Roasted Chicken Pot Pie, which comes with a warning for diners to watch out for bones, a signifier of its homemade authenticity.

Not frozen in time. Updated takes on the standard include offerings from Dangerously Delicious Pies in Baltimore like Sleepy Rodriguez, a chicken enchilada pie, and the Cowboy Quiche with a scrapple crust. The Pulled Pork BBQ Pie gets its flavor from jalapeño and habanero peppers, vinegar, brown sugar and mustard sauce. Its inspiration, according to the pie specialist’s web site, is owner Rodney Henry’s “impression of what the relationship between Slim Pickens and Willie Nelson during the filming of “Honeysuckle Rose” … smelled like during production. Pretty good I bet.”

In Chicago, independent bakery Justice of the Pies appeals to vegetable lovers with a toothsome Lentil & Kale Pot Pie, while a perennial best seller at four unit, Atlanta-based Southern Baked Pie Company is the Tomato Pie, a Southern staple which mixes tomatoes, sweet onions and a cheese blend covered in a high-butter crust. The operation also caters to carnivores with savory pies that encrust familiar entrées like beef Stroganoff and pot roast.

At the other end of the spectrum, Wildflower American Cuisine in Tucson, Ariz., recently offered a family-meal package that included a luxe Roasted Chicken & Black Truffle Pot Pie with shiitake mushrooms and heirloom carrots, and The Gnome Craft Pub, recently opened in St. Paul, Minn., takes an upscale turn with the attractive Beef & Bone Marrow Pot Pie that marries house-made osso buco with roasted vegetables finished with demiglace and crowned with a crust.

Variations on the theme. Shepherd’s Pie is a culinary first cousin to the conventional pot pie, in which meat, gravy and vegetables are covered with mashed potatoes. Created as a means to use leftovers, modern chefs overcome its humble origins, as at popular 1920 Tavern in suburban Atlanta, where its Boneless Short Rib Shepherd’s Pie includes the title ingredient topped with cheddar-bacon potato purée. Rock Bottom Restaurant & Brewery turns things upside down at its 19 locations: The Short ‘N Stout is a house-made beef pot pie in stout gravy that is served over white Cheddar mashed potatoes.

A pie in the hand. Hand pies, especially the fried version, are often associated with the South, though they can be found far and wide.

Savory hand pies, originally a staple in workers’ lunch pails, are making a comeback thanks to their combination of convenience and versatility, not to mention portability. They can be stuffed with combinations ranging from cheesesteak to sausage and beyond.

A standout on the Diner Bar menu at The Grey, an award-winning restaurant in Savannah, Ga, is the Oyster Hand Pie.