/sites/all/themes/penton_subtheme_restaurant_hospitality/images/logos/footer.png
Recent
Recent
Sam Oches named Editorial Director, Editor in Chief of Nation’s Restaurant News and Restaurant Hospitality
May 10, 2021
Flavor of the Week: The Negroni: The boozy cocktail from Italy
May 10, 2021
New on the Menu: Seafood sliders, watermelon salad and spiced green beans
May 07, 2021
More than 186,000 restaurants and bars have already applied for the Restaurant Revitalization Fund
May 05, 2021
Here’s what it’s like to apply for a Restaurant Revitalization Fund grant
May 04, 2021
Featured
Alternative delivery players challenge third-party delivery stronghold
May 04, 2021
The new maximalism: Will restaurant design do a 180 into rebellious excess?
Apr 22, 2021
Pat Martin, chef and owner of Martin’s Bar-B-Que and Hugh Baby’s, discusses the business and meat supply of the coronavirus pandemic
May 05, 2021
Eleven Madison Park in New York City to reopen with meatless menu, chef and owner Daniel Humm says
May 03, 2021
New on the Menu
brought to you by
Food & Drink

New on the Menu: Three dumplings and a cocktail 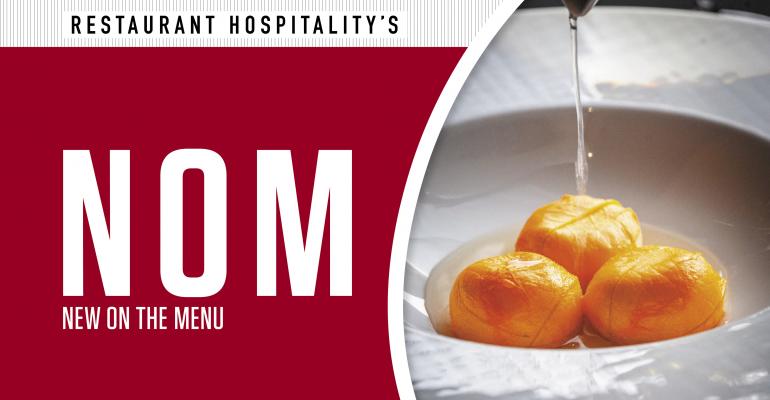 Pretty much every cuisine has some kind of dumpling, and this week we look at three of them.

Shanghai Taste in Las Vegas has a whole new lineup of dumplings, including a soup dumpling filled with shrimp and cucumber juice.

The Mandarin Chinese word for soup dumpling is xiao long bao. The long is the steamer tray in which the dumplings are served. Xiao means “small” because the tray is smaller than those used for the more common, fluffier dumplings. Bao, as you might have guessed, means dumpling.

Chef and owner Jimmy Li colors them green with bok choi juice, and green is also the theme of the seasonal dumpling at Alfie’s Kitchen & Bar in New York City, where chef Darren Pettigrew is stuffing ravioli with peas and serving them in a buttery green sauce.

In Napa Valley, at Press in St. Helena, Calif., Philip Tessier is forming dumpling skin simply by covering ricotta balls with fine 00 flour, which he then wraps in squash blossoms for delicate gnudi.

But not everything’s a dumpling. At The Winery Restaurant & Wine Bar, with two locations in Southern California, chef Yvon Goetz draws inspiration from a French dessert to make a stacked tuna tartare, in in Denver, at Forget Me Not Cocktail Bar, the flavor of birch gives nuance to a take on the Old Fashioned.

This gallery has been updated to clarify that the Pioneer cocktail at Forget Me Not is not actually served with a flaming birch chip.
Start Slideshow ›
0 comments
Hide comments
Recommended Reading

New on the Menu: Seafood sliders, watermelon salad and spiced green beans
May 07, 2021