New on the Menu: Seasonal grilled quail and octopus in carrot mole 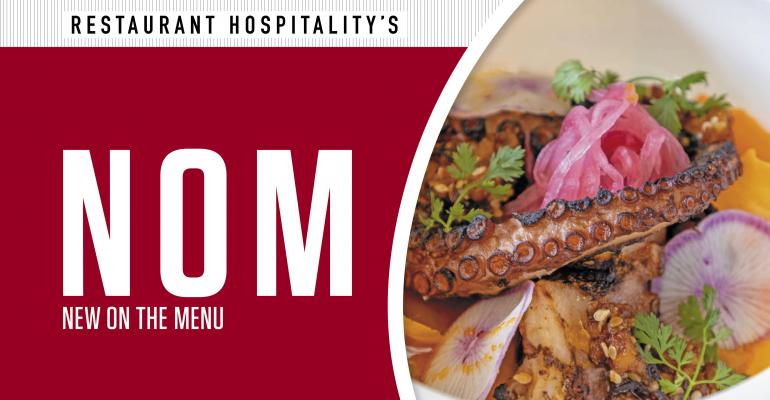 Start Slideshow ›
Plus a cake with cookie dough, a Hawaiian pork chop and the latest from Jonathan Benno

Lau Lau is a traditional Hawaiian dish of pork and fish wrapped in luau leaves — the leaves of the taro plant, often called callaloo in the Caribbean, or simply taro leaves. That’s the inspiration for the pork chop dish that’s currently on the menu at Mahina & Sun’s on Waikiki Beach in Honolulu.

In another sun-drenched venue, Miami Beach, Fla., pastry chef Dallas Wynne of Toothfairy bakes a yellow cake with rainbow sprinkles and layers that with raw cookie dough and covers it all with blue and pink buttercream for what she calls the Funfetti Cake. And in sunny Old Towne Orange, Calif., David Yamaguchi, chef of O Sea, makes a colorful dish of octopus in carrot mole with a salsa that’s so popular that it’s also available in retail.

Meanwhile, in Chicago, at Wood, chef Devin Kreller uses local wheatberries and pears to accompany local grilled quail for an early autumn dish, and in New York City former Per Se chef Jonathan Benno, inspired by the “bistronomy” movement in Paris in which high-end chefs open more casual restaurants, has opened Bar Benno and is doing his own version of escargots bourguignonne.