/sites/all/themes/penton_subtheme_restaurant_hospitality/images/logos/footer.png
Recent
Recent
New on the Menu: Corn ribs and mapo mac & cheese
Jun 11, 2021
A look at seven new restaurants serving breakfast all day
Jun 09, 2021
Flavor of the Week: Farro, the trendy ancient grain
Jun 07, 2021
5 Things: Boston coffeehouse forms union; food industry adds most jobs in May
Jun 07, 2021
Courts are challenging the Biden Administration’s prioritization of women and minorities for restaurant relief grants
Jun 07, 2021
Featured
8 new restaurants we’re dying to try: Summer ’21 anticipation edition
May 25, 2021
This delivery co-op will let restaurants own a piece of the profit
May 24, 2021
Tiffany Derry and Tom Foley plan a fried-chicken concept for underserved communities
May 20, 2021
After a pandemic pause, Ani Ramen House is shifting to rapid growth mode
May 20, 2021
New on the Menu
brought to you by
Food & Drink 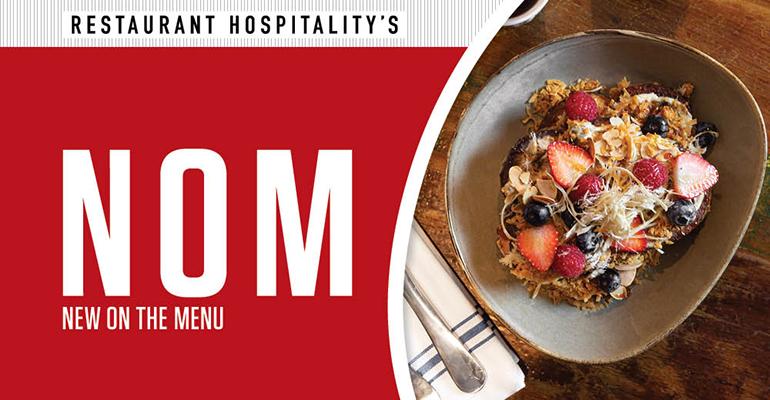 If the cuisine of the Republic of Georgia ever gets traction in the United States, it will be because of khachapuri, the oblong cheesy bread topped with an egg. At Tzarevna, a wine bar in New York City that bills itself as Eastern European but really offers food from all over the former Soviet Union, and specializes in Georgian wine, chef and owner Ricky Dolinsky has scored points with local media with his crab-stuffed version of the dish.

Elsewhere in seafood, Sunny Oh is jazzing up salmon tartare at Juvia in Miami Beach, Fla., with the fishy vinegar condiment tosazu, and crumbles of the savory Japanese rice crackers arare.

Plenty is going on at brunch: Jaleo in Las Vegas just started serving it, and among the highlights is a hearty egg-and-rice dish featuring pork belly and banana; and at Zizi, a new spot in New York City that serves brunch every day, Tel Aviv is the inspiration for its French toast topped with halva, date honey and more.

If that’s not sweet enough, Dolly Llama in Los Angeles has a treat of horchata ice cream wrapped in a bubble waffle — the crunchy waffles with large, egg-shaped protrusions that you can now find at many East Asian dessert shops.