New on the Menu: A cone of chicken tenders and an egg-stuffed omelet topped with eggs 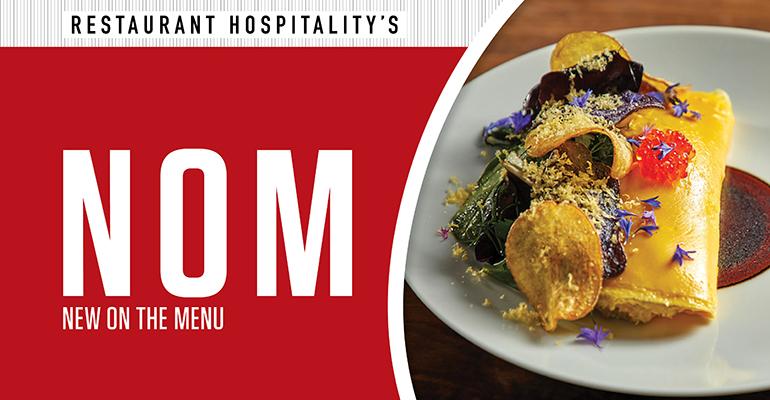 Start Slideshow ›
Plus trout with pomegranates and salsa verde, updated tiropita and an upscale Cobb salad

Michelin-starred chef Donald Young is opening a restaurant, Venteux, in Chicago this spring, and he’s offering his signature omelet stuffed with scrambled eggs and topped with trout eggs, a salt-cured egg and hollandaise sauce (which of course is egg-based). Well, it’s sort of a hollandaise: It has yeast and tomato coulis in it — you’ll have to flip through the gallery to learn more.

Actual trout is on the menu at Blue Ridge Kitchen in Sebastopol, Calif., where it’s enriched with creamed Brussels sprouts and then balanced with pomegranate and salsa verde.

Buttercup is a limited-service concept that just opened in the Legacy Food Hall in Plano, Texas, and it uses chicken tenders as the vehicle for pretty much any sauce you’d like.

For those who just want a salad,  Harold’s in New York City has an updated version of the Cobb, and at Andros Taverna in Chicago, chef Doug Psaltis is updating a classic Greek feta cheese pie.

An error in the location of Blue Ridge Kitchen has been corrected. A misspelling of Donald Young's name has also been corrected.
Start Slideshow ›
TAGS: Food Trends
0 comments
Hide comments
Recommended Reading