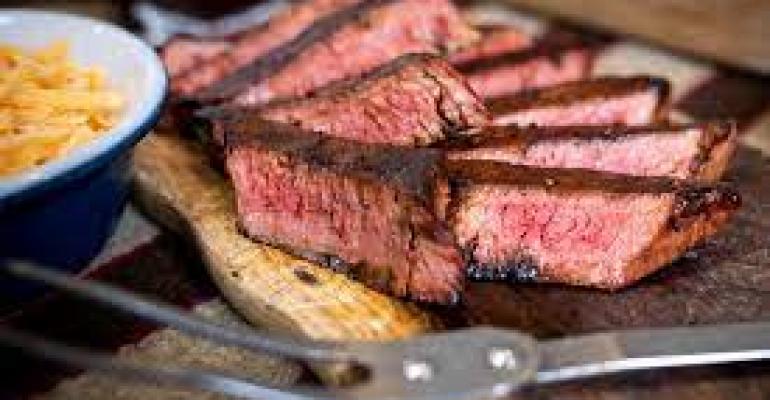 Is mushroom root the next big meat alternative?

An investment from Chipotle Mexican Grill’s Cultivate Next venture fund last week has put the spotlight on fungi as the next big meat alternative.

One of the first two investments from Chipotle’s $50 million fund went to a Boulder, Colo.-based company called Meati Foods, which produces a plant-based protein made from mushroom root — or really the strain of a spore from the root-like filaments called mycelium, which is grown in a fermentation process.

The debut products that will soon hit grocery stores nationally and be available for foodservice include chicken-like cutlets (a breaded version and a classic four-ounce “breast”) as well as “steaks” (a classic filet and carne asada) under the brand Eat Meati.

Including the Chipotle-led investment, Meati Foods last week completed a $150 million fundraise in a Series C round, bringing total funding to more than $278 million. The support will accelerate production of the meat alternative, which has protein content similar to meat (18 grams per serving) with more fiber (12 grams) and no cholesterol.

The round was led by Revolution Growth with participation from new and existing investors, including Grosvenor Food & AdTech, Canada Pension Plan Investment Board and Wellington Management.

Scott Tassani, president of Meati Foods, in an interview Monday said the world of all proteins, including meat, in the U.S. is about $160 billion.

“Alternative proteins are about 1% of that, and the vast majority of the business in that 1% has been mostly in grinds and burger alternatives. But 60% of that $160 billion in [protein] sales in the U.S. is done against whole cuts of product, and, to date, there really hasn’t been an offering in the [plant-based] space that can do what Meati does,” Tassani said.

Even as interest in plant-based proteins grows, the race is on to bring more “whole food” products to market that can shake off the reputation of being created in a lab.

So far, three Colorado restaurant operators are working with Meati products on their menu, but that’s only because the company hasn’t yet fully ramped up production, he said.

In Boulder, Colo., guests can substitute Meati cutlets in place of meat in sandwiches at the fast-casual concept Raglin Market. And the upscale restaurant Salt is serving a Nashville Hot Meati sandwich with white cheddar, roasted garlic aioli and pickles for $16.

Expect to see Meati become more available in September, when the company is scheduled to open a 100,000-square-foot Mega Ranch in Thornton, Colo., that will have the ability to produce tens of millions of pounds annually.

Next year, the company plans to break ground on a Giga Ranch, capable of producing hundreds of millions of pounds, which will help the company ramp up production of a broader range of products.

Tassani said the brand will be available in Sprouts stores in October. He declined to comment on any potential test of the product by Chipotle, but Curt Garner, the fast-casual chain’s chief technology officer, said in a statement that any test would begin with the stage-gate process by which all new menu items are validated.

Meati isn’t alone in the quest to pitch fungi as a meat alternative to U.S. consumers.

The famed New York chef Eric Ripert of Le Bernardin has become culinary advisor to Nature’s Fynd, based in Chicago, which is producing a fungi protein called Fy. Ripert is testing the product as a dessert on Le Bernardin’s summer menu as a sort of dairy-free cream cheese.

“The space is getting busy,” he said. But once potential partners and consumers taste it, the feedback so far has been “that we have a far superior product.”