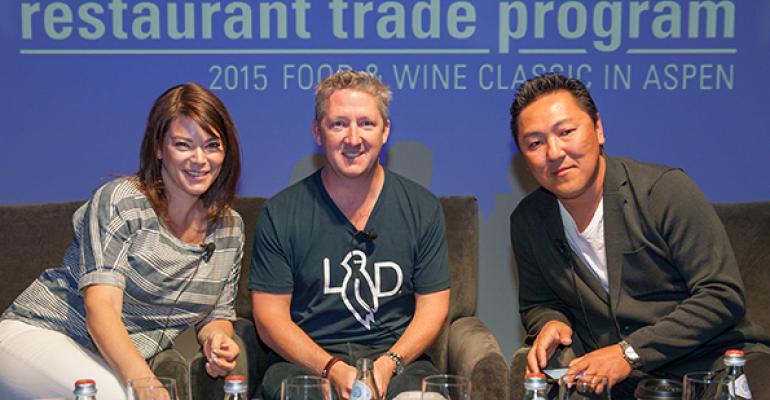 At the recent Food & Wine Classic in Aspen, an intimate panel of two celebrity chefs discussed the business of restaurant expansion. The panel was held during the American Express Restaurant Trade Program and was moderated by Gail Simmons of Food & Wine. Sitting on the panel were:

• Tim Love, the chef/owner of Lonesome Dove Western Bistro, White Elephant Saloon, Love Shack, Woodshed Smokehouse and Queenie’s Steakhouse, all in and around Forth Worth, TX. Love is also a co-host of a CNBC television show called Restaurant Startup, where potential restaurant investors seek advice and funding.

Simmons: Let’s start at the very beginning. Did you begin with a concept in mind, or did you first begin looking for investors?

Love: My very first restaurant was Lonesome Dove in Forth Worth. Before that I was a chef at a local restaurant and I wanted to go out on my own. I had no idea how to raise capital. This is a good point: there are a lot of young, talented chefs out there who think they are special, but they don’t know many people and don’t know the market or how to raise capital. So, my wife and I had to raise our own money. At the same time it’s a very good thing, but it’s also a very exposed thing. When you put every dollar and cent you have into a project on your own, you have huge exposure.

Simmons: How do you convince someone to invest in you when you’re not proven?

Love: Your best bet is to find people who have been eating in your restaurant and make a relationship with them. The problem is, at this point you’re young and not very smart and haven’t made any deals and the people you’re approaching are smart and have made deals and before you know it you think you have your own restaurant, but you’ve become a slave to the investors. That’s not necessarily a bad thing, you just have to understand that your name may be on the restaurant, but you’re still an employee.

Simmons: Then how does a young chef protect himself?

Love: First, you have to understand that if you think you’re a good cook because you can make fried chicken for 10 at a dinner party, that’s not necessarily true. It’s a far cry from a chef who has to make fried chicken for 10,000 people exactly the same each time. I say this all the time: Where commerce and art meet, that’s called a restaurant. And that’s the most important thing to remember. As the chef, you’re the artist, the investor is the commerce. One can’t be up here and the other can’t be down there. You have to meet in the middle or the restaurant fails.

Simmons: Sang, in your case, your first restaurant had already existed in a different form. Father’s Office had been around a long time. How did you come into that deal?

Yoon: Father’s Office in Santa Monica is where I grew up and it was my watering hole. It’s where I’d go after work for a beer. So, for my first place I didn’t really have any investors or a business plan. An opportunity came up for me to take over this place, so I got as much money together as I could and bought it for $114,000. I didn’t even have all of it. I had just about $106,000, so I had to borrow a few bucks. And that $114,000 price included renovations to the place. Today I couldn’t build two bathrooms for $114,000. It was a very different time.

Simmons. So, now you own a bar, all on your own?

Yoon: It was all mine. Eight years later I opened another much, bigger one (Father’s Office). I took on three partners this time, but very limited partners. It was a very atypical deal, one where I wouldn’t be working for the investors. My whole deal was that if I couldn’t own a lion’s share of the business, I wouldn’t do it, which explains why I have only three restaurants. But I own them all.

The reality for young operators

Simmons: So how did the deal work?

Simmons: Why did they want to do it?

Yoon: I was able to convince people that investing in this business was like investing in Apple stock. You don’t work for Apple, but you still invest in the business because you believe in it, so invest in this restaurant if you like the product I put out. You won’t contribute ideas, you’ll just be in the background as an investor.

Simmons: Tim, in your case you did the deal on your own.

Love: Yes, but then I took on investors. Here’s how it generally works. Let’s say you take on four investors who contribute up to a million dollars. So each investor puts in $250,000. What should happen is that they should get their money back first because they own the company until they are paid back. At that point, it shifts back to you. That’s where the deal becomes really fun. But once they’re paid back, that’s where the negotiations start. So most of the time it’s a 50/50 split, with the chef having control.

Simmons: Sang, you don’t like to work the deal that way.

Yoon: I want to be in control from the start. I like to establish the terms…from the very beginning to the end. I don’t like a deal that starts this way and turns into something else.

Love: Every deal is different. There is no typical deal, although investors will often say, “Typically we do blah, blah blah.” And you have to get smart and say, “I’m not typical.” And if you get stuck at a point, you have to decide if you want their money or not. You can be the most talented chef in the world, but if you don’t have money to buy ingredients, you’re going nowhere. You can have a billion ideas, but without backing, it’s only an idea.

Simmons: So if you’re a young operator, what is the reality? How do you make a deal that benefits you?

Love: Here’s a perfect example from Restaurant Startup. Three young cooks, who had zero business acumen, who did not know how a restaurant operated—but were great cooks—were doing a little popup in Seattle. So they came on the show and negotiated and I ended up giving them all the capital. I put in $250,000 and we built a restaurant and I was involved in that because they didn’t know how to build a restaurant. It was obviously cheap. Building a $4 million restaurant wasn’t going to happen.

Simmons: Do you get people expecting that kind of money?

Love: Some chefs get on TV, get a little fame and think they’re going to get $4 million to build a restaurant, but it’s not a reality. In this case I own the restaurant until I get paid back and I get 60 percent ownership and they get 40. On the second deal, we can do a 50/50 ownership. They have to prove their concept is for real before any more money comes, and that’s not an unrealistic deal.

Simmons: So the young chefs get a smaller deal up front with the idea that they prove themselves and, if they do, the next location will be the one where they have more control.

Yoon: I even get approached to invest money, and I don’t know why. But people say, “I want to open 10 of these (concepts).” Really? Just open one. You can worry about the other nine when you pay off the one. My advice to all these young chefs who want to build temples to themselves is watch your nickels and invest $100,000, $200,000, if you can get it, and find a dead restaurant. Every city has tons of dead restaurants. You don’t have to build from scratch. Take over an existing restaurant space. Use their old pots and pans. Nobody cares. If you’re a good cook, it doesn’t matter. Cook your ass off; build an audience organically from the ground up. Maybe the next one you’ll deserve. But I believe that first restaurant has to be yours. Whatever you have to do to get money without giving away too much. Then it’s truly yours and you can learn how to operate it. When you make mistakes and it’s your money, you learn quickly.

What to look for in a partner

Simmons: What do you look for in a partner?

Drew Nieporent (sitting in the audience): Sang just said he doesn’t like Hollywood types, but I’ve had Robert De Niro as a business partner for 25 years. In addition to him, other business partners include Bill Murray, Sean Penn, Mikhail Baryshnikov, Christopher Walken, Ed Harris and Lou Diamond Phillips. It’s been a perfect marriage. Only one lawyer from all those people has ever questioned the financials.

Simmons: How did you know that it was going to work out with them?

Nieporent: My first restaurant, Montrachet, I opened on a shoestring in 1985. Robert De Niro came in and he would sit all the way in the rear with his back to diners. He had a vivacious girlfriend and she said to me, “Bob wants to know if you’d like to open another restaurant in Tribeca?” I said, ‘You talkin’ to me?’ That was the start of the marriage.

Love: Choosing your partners is very individual and individual to the type of restaurant you’re building. So when you’re looking for investors, what happens is what happened to Drew. De Niro wanted in and he brought along other investors. That’s not unusual, though you often only deal with the one investor, who handles the others. But you’ve got to be careful because when you’re desperate for cash you’ll make deals with people who have attorneys who are 45 times better than your attorney. The worst deal you can ever make is one out of desperation.

Simmons: How do the financing structures change when you move on to other restaurants?

Love: It gets interesting when you have investors in your first restaurant and then when the second time comes around it’s like renewing your marriage vows. It’s a difficult conversation to tell your investors you want better terms the second time around. If you have a good track record the first time around, you can demand more the second go around. And when you plan your second restaurant, it’s common courtesy to offer your first restaurant investor the opportunity to invest in your second restaurant. But if you can’t contribute any money to the partnership, you’re always going to lose any kind of value in that restaurant.

Yoon: When you open your first restaurant, own the intellectual property, like the name of the restaurant, in case everything goes south. If not, your investors will own everything you created and you can’t take that somewhere else. It’s your ideas and you need to keep hold of them.

Love: You need to hold on to that intellectual property, even if it means leasing the name of the restaurant back to the partnership for $1.

Yoon: Everything moves so fast now, nobody seems to want to build the business. They just want to put something quickly together, get a bunch of press and then immediately think they deserve more. I believe in waiting for the buzz to die down to determine what you’re really made of. Then determine if you have the team, the infrastructure, the understanding of the business to do this again. It’s really hard to do, which is why you often see really rapid growth and then rapid decline. Take your time.