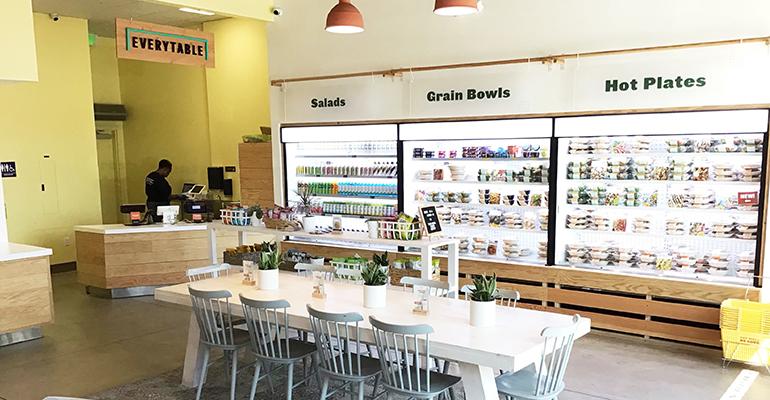 Everytable
Everytable plans to expand to 20-30 locations by the end of 2021.
Operations>Finance

Everytable — the Los Angeles-based social enterprise foodservice company — announced on Tuesday that the company has secured $16 million in Series B investment funding from backers including French investor Creadev and healthcare venture investing group, Kaiser Permanente Ventures. With this new round of funding, Everytable will continue to work on its goal of democratizing access to nutritious food in so-called ‘food deserts’ or underserved communities, with plans to expand from 12 stores serving food prepared in a centralized kitchen to 20-30 stores by the end of 2021.

Everytable began in 2016 as a grab-and-go restaurant offering individually packaged meals starting at $5.00, that are price-tailored to the average income of the surrounding community. In 2018, the company launched smart fridges attached to mobile apps that dispense healthy meals and charge customers based on the amount of food they remove from the fridge.

Today, the company has grown to 12 restaurants, 300 smart fridges located around Los Angeles and thousands of meal subscribers.

“Our plan is to make access to healthy fresh food as easy as vending machines distributing soda and candy,” Sam Polk, CEO of Everytable told Restaurant Hospitality. “We’ll press the gas pedal on these as soon as the vaccine gets going.”

During the pandemic, the company created a coronavirus helpline to meet the growing needs of the community. Additionally, this year, Everytable launched an institutional foodservice division and is now partnering with 50 organizations like The City of Los Angeles’ Department of Aging, Santa Monica College, and Los Angeles Homeless Services Authority to provide meals for marginalized groups including homeless people, senior citizens and food insecure college students.

“All of this has been our way of doing service during a trying time,” Polk said. “We’re providing food not only do hospitals and universities, but now large corporations want to get in on it, and they’re trying to feed people working for them.”

With this latest round of funding, Polk said that they’ll be able to invest in their technology and supply chain side where they will build relationships to buy ingredients directly from small farmers. The funding will also allow Everytable to lay the groundwork for their next major expansion, which will either take place in Northern California or New York City. Polk said they plan to announce their next stage of expansion in early 2021 and begin opening stores by the third or fourth quarter of 2021.

Everytable’s expansion in 2021 and beyond will be bolstered mainly by their social equity franchise program, initially announced in January, which helps to financially support and recruit entrepreneurs of color to operate restaurants in underserved neighborhoods. The entrepreneurial loans are donated by philanthropies like the Kellogg Foundation and the California Wellness Foundation.

Within the next five years, Polk hopes to expand Everytable to at least five to seven major regions around the country and for the company to go public. He anticipates that they will announce another round of funding in the next 18 months and plan to raise $10 million dollars through loans and donations for their social equity franchise program over the next year.

“We want to have as many restaurants out there as McDonald’s and double that with our fridges,” Polk said. “The food system needs to be rebuilt. We want to provide farm fresh, made-from-scratch food at the same price of processed junk.”