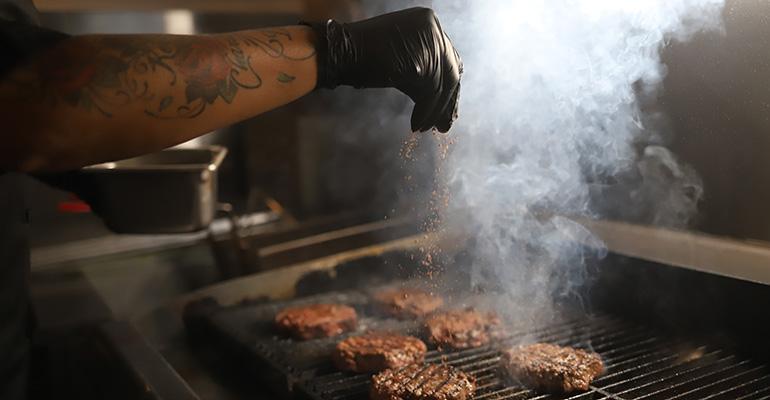 PepsiCo
7th and Grove in Tampa, Fla is one of the businesses that's featured in the new PepsiCo ad spot highlighting Black restaurants.
Operations>Finance

PepsiCo launches Dig In initiative, hopes to bring $100 million in business to Black-owned restaurants over 5 years

“Our mission to connect Black-owned restaurants with the access, business acceleration, and visibility needed to thrive requires a clear call to action: Dig In,” Scott Finlow, chief marketing officer for PepsiCo Global Foodservice, said in a statement.

The goal of the new platform is to generate $100 million in sales for Black-owned restaurants over the next five years through a consumer-facing initiative to move spending dollars toward these businesses.

The Dig In platform, run by PepsiCo, will provide the restaurants with business services, training and mentorship.

To kick off the consumer-facing program, PepsiCo created a commercial that premiered during the Dec. 26 NFL playoff games on NFL Network and will run through Super Bowl Sunday.

Called “Savor the Sound,” the commercial spot features four Black-owned restaurants – 7th and Grove in Tampa, Fla.; Kitchen Cray in Washington D.C.; Off the Bone in Dallas and The Breakfast Klub in Houston.

“Dig In to the vibrant, delicious menus of Black-owned restaurants. Help build this moment into a sustainable movement that enables businesses to continue serving as cornerstones of our communities,” Finlow said.

These “hometown heroes” are just four of many but demonstrate the movement toward supporting Black-owned businesses in the wake of the death of George Floyd in May and others throughout 2020. As the push for social justice grew last spring and summer, consumers created spreadsheets of Black-owned restaurants in each city, news coverage increased and signs were placed in entryways to denote Black-owned businesses.

A September study found that one-third of consumers were more inclined to seek out a Black-owned restaurant during a time when many restaurants were facing closure due to the COVID pandemic. In fact, several restaurants in danger of closing say they were saved by the increase in business from the social justice protests and move toward supporting Black-owned businesses.

Dig In aims to continue that momentum over the next five years.

“Our restaurant has stood strong with open doors for 19 years as a Houston mainstay, feeding locals and visitors alike,” said Marcus Davis, founder and owner of The Breakfast Klub and member of the PepsiCo Black Restaurant Advisory Council. “With the national exposure that Pepsi is providing to businesses like mine, I hope to see a boost in active interest and support of the many Black-owned restaurants shaping the culture and food scene in neighborhoods across America.”

At the height of the racial justice protests, PepsiCo CEO Ramon Laguarta published a letter outlining the company’s steps moving forward, including putting $400 million toward changing the landscape over the next five years. The company planned to expand its Black managerial population by 30%, double spending with Black-owned businesses with an incremental spend of $350 million, invest $50 million over five years to strengthen Black-owned businesses, deliver $6.5 million in grants and launch a Community Leadership Program for Black non-profit CEOs.

“The bottom line is: this moment calls for big, structural changes, and we’re committed to being agents of that progress,” Laguarta said in the letter.

“This killing of George Floyd really opened the eyes of America, and the world about how racism and racial inequality impacts black Americans in all aspects of their life, including business,” Fernandez said then. “Now, companies, foundations, and others are stepping up with a desire to make significant and lasting economic change in the lives of Black Americans.”

The National Restaurant Association estimates that more 110,000 restaurants have closed since March.