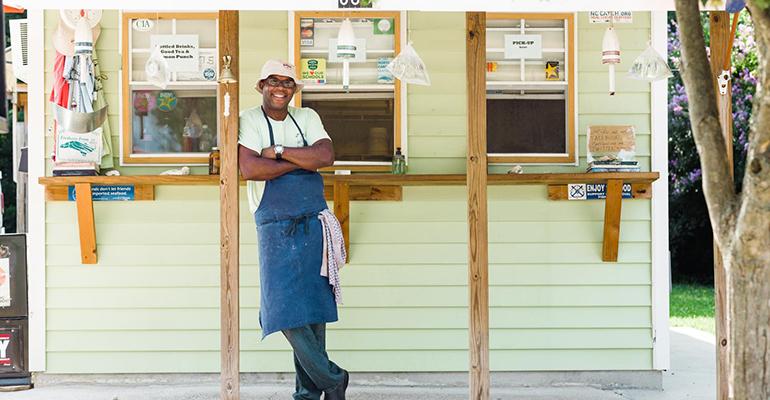 Baxter Miller
A lot of the growth, say Black-owned restaurateurs, is coming from a more diverse group of customers. “We did record numbers [on Juneteenth],” said Ricky Moore, chef and owner of Saltbox Seafood Joint. “And the demographic of the consumer was mostly white folks.”
Operations

These Black-owned restaurants were saved by the social justice movement

The racial and social justice movements ignited by the killing of George Floyd in May are leading to big changes in many aspects of American life, including the move by a growing number of people to visit and support Black-owned restaurants.

According to a new study from The Coca-Cola Company, as a result of the recent events around racial and social justice, more than one-third of consumers are more inclined to seek out and visit Black-owned restaurants when they reopen.

Related: Building Community: How 10 Black-led restaurants are giving back in challenging times

“Our study found that recent events around race and social justice have inspired diners to seek out Black-owned restaurants,” said Kathleen Ciaramello, president, foodservice and on-premise at The Coca-Cola Company. “This increased support comes at a time when Black restaurant owners desperately need it, as 84% of them have made staff reductions due to COVID-19.”

More than just intentions of well-meaning consumers who participated in the study, Black restaurateurs across the country confirm an uptick in brand awareness, sales and visits in the wake of Floyd’s death.

“His death is not in vain. Some of our restaurants would not be here today,” said 30-year veteran restaurateur Barbara “Sky” Burrell, owner of Sky’s Gourmet Tacos. “We would not have survived COVID.”

Sales at Burrell’s two Los Angeles-area Mexican-soul food restaurants tripled after May, and while sales have since returned to the mean, they are strong enough for her to have recently opened a third location in downtown Los Angeles.

“The first thing we thought with all that is happening is ‘we’re going to have to close,’” said Burrell. “What happened is the reverse.” 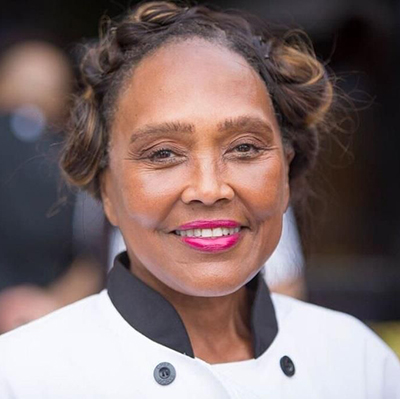 Similarly, Mooyah Burgers, Fries and Shakes franchise owner LaVondra Coleman is seeing increased traffic at her Baton Rouge, La. location, with one of the drivers being people wanting to support minority-owned businesses.

“The recent focus on minority-owned businesses has drawn new guests to try Mooyah and discover they love it,” said Coleman.

At her Baton Rouge location sales have increased 7.1% overall, due to a huge bump since the Black Lives Matter movement has swept the nation. Last week's sales were up 58.3% over the same period year ago, she said.

A lot of the growth, say Black-owned restaurateurs, is coming from a more diverse group of customers.

“We did record numbers [on Juneteenth],” said Ricky Moore, chef and owner of Saltbox Seafood Joint. “And the demographic of the consumer was mostly white folks.”

In business about a decade with two locations in Durham, N.C., Moore insists the increased numbers did not come out of his robust group of regular followers, but in response to what’s going on in society.

“I believe I got some additional traction,” said Moore. “I’ve seen my revenue grow.”

Black and Mobile, a food delivery service that exclusively serves Black-owned restaurants, has seen a recent surge in support from all kinds of customers.

“The amount of support we got when [Floyd] was murdered was overwhelming,” said Black and Mobile founder David Cabello. “I don’t like how it happened, that a Black man had to die.” 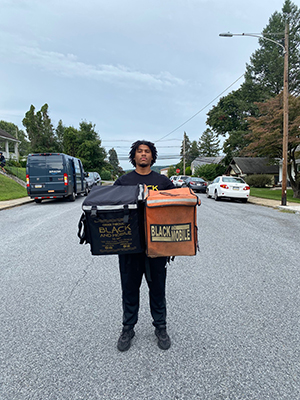 In fact, the surge was so big in May that Cabello had to shut down the business for a few weeks because the company didn’t have the infrastructure to support the unexpected volume.

Black and Mobile now has 60 participating restaurants in Philadelphia, Atlanta and Detroit, and about 60,000 downloads of the app. That’s a huge shift from when Cabello first launched the company in February 2019 and many businesses were not interested in working with him, some even called him racist.

“All different kinds of people have now joined the front lines,” said co-founder Gaiana Joseph. “For a lot of people these are restaurants they haven’t been to or haven’t heard of.”

“People who have had the meal on the front lines are now being patrons,” added co-founder Allegra Massaro.

Some may wonder if the uptick in interest in Black-owned restaurants will fade when the dust settles.

Of customers who first visited Saltbox between March and the present, Moore said, “They experience me one-time. They plan to come in the future, I believe.”

Sky’s Burrell, who has kept her business alive for 30 years and counting through all kinds of economic and social unrest, including the LA riots that followed the police beating of Rodney King in 1991, is optimistic.

The LA riots after King’s beating did not impact Black restaurants, said Burrell. “This I believe will have bearing on our society,” she said of the current social justice movement. “It already has.”