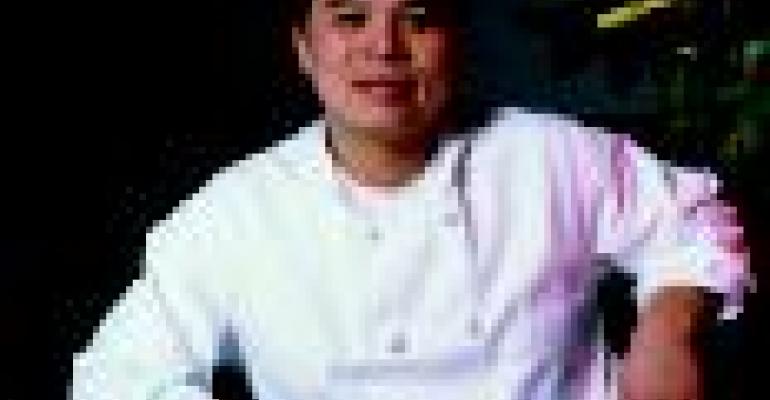 There are turning points in everyone's culinary life, and surely anyone who has eaten at The Slanted Door in San Francisco has experienced one. Few of us have grown up eating Vietnamese food, but one dish, dare we say it, one bite here makes you regret all that you've missed. For that you can thank chef/owner Charles Phan, one of the country's great talents.

The Slanted Door has become such a stopping-off point for anyone visiting San Francisco, the James Beard Award saw fit last year to name Phan Best Chef: California. Think about that. In one of the world's great restaurant cities and in a state known for great restaurants, Phan was declared top of the heap.

"I showed up without a camera," says Phan, who never expected to win a Beard Award. "It was a huge honor to be recognized like that, especially when you're cooking ethnic food."

At The Slanted Door, it's all about the food. Fresh vegetables from pesticide-free farms. Organic fruit from local orchards. The highest quality meat, chicken and fish—bar none.

Phan, 43, first elevated Vietnamese cooking to sophisticated heights when he opened The Slanted Door back in 1995. At the time, there were very few Vietnamese restaurants in San Francisco, let alone restaurants offering timeless, traditional dishes with flair.

Immigrating from Vietnam to the United States with his family when he was 13, Phan never dreamed he'd operate one of the nation's most successful Asian restaurants, which has since moved to its high-profile spot in the Ferry Building Marketplace. Although Phan worked at restaurants to earn money while going through college at the University of California at Berkley, his initial career goal was to become an architect.

He worked in the design field for a short time and also tried to break into the world of computer software. Yet, "I always had the idea that I'd someday open a restaurant like this," says Phan, whose parents are business owners.

So, at the age of 33, Phan—along with a small group of family members—decided to take a chance and open The Slanted Door. "I had $30,000 to my name. We were betting everything," he recalls.

He was also hoping that people would flock to a Vietnamese restaurant focused on authentic cooking with fresh local ingredients. The gamble paid off—handsomely. "I was hoping just to make $300 a day in revenues, enough to survive. I've come a long way," says Phan, whose restaurant now supports 22 family members and a total of 180 employees.

Over the last decade, The Slanted Door has earned its reputation at the top pick for classic Vietnamese dishes that appeal to American palates, says San Francisco Chronicle Restaurant Critic Michael Bauer.

"Phan was able to popularize upscale Vietnamese food. He also brings a sensibility to Asian cuisine by going to extraordinary lengths to get great products. He even uses organic fruit at the bar," says Bauer.

Customers seem to particularly enjoy the Moscato d'Asti gelee with poached yellow peach and granite. The peaches are grown by a local small farmer. The restaurant even uses fresh grown limes, lemons and other fruits in its cocktails. There is no such thing as a premixed drink at The Slanted Door, says Phan.

The Slanted Door also offers one of the most extensive Chinese tea selections in San Francisco, including organically grown Drum Mountain green tea, and an herbal blend of rose buds, chrysanthemum, lichen and fresh ginger. If you're looking for "high-end, artisan teas," this is the place to be, he says.

While the cuisine at The Slanted Door is reminiscent of the cooking Phan grew up with in Vietnam, the restaurant's interior dècor bears no resemblance to a Vietnamese restaurant—in either Asia or the United States. "There are no red lamps or bamboo here," says Phan, describing the interior as sleek and modern. The ambiance, in turn, is high energy, loud and fun.

You may not get a quiet meal at The Slanted Door, but that doesn't seem to matter, says Bauer. "It's always been about the food. It's excellent."