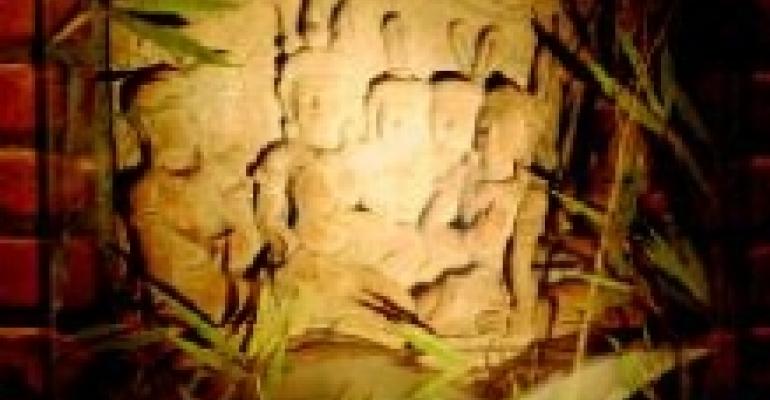 EXOTIC AND EVOCATIVE are good words for a private dining space, and that's what designer/architect Stephen Francis Jones, AIA was able to accomplish with the new 1,700-sq. ft. space at Wolfgang Puck's Chinois on Main in Los Angeles.

Art and ambiance work together to give guests the flavor of the original Chinois, created by Barbara Lazaroff more than 20 years ago, while they bask in the coziness of a freestanding dining space that accommodates 60 diners and houses a 3,000-bottle wine cellar in an area adjacent to the original restaurant. It's nearly double the restaurant's seating capacity.

"The driving force," says Jones,"was to keep the spirit of Chinois, so that when people rented the private room, they felt part of the action–although there's no connection to the space.They're part of the whole establishment." The project was complicated by the fact that no physical connection ties the new space to Chinois. Due to code requirements, the private dining facility had to be approved as a stand-alone restaurant and meet requirements such as having its own kitchen.

In working for his longtime client Wolfgang Puck, Jones wanted to capture the mood of the existing Chinois design. "The color scheme and materials provide continuity," he says. However, the space also has its own character and interest. "We purposely didn't use fuschia, but we held onto the use of celadon on the exterior. For the flooring, we used leopard wood, with a grain pattern that looks like leopard skin. Chinois doesn't have any wood on the floor, so that was a big difference."

Jones is principle of SFJones Architects in Marina del Rey, CA. Attention to detail is evident in much of the firm's work. Regarding his restaurant design philosophy, Jones says, "I look at restaurant projects like giant art pieces that have two components: the complexities of the kitchen with technical requirements, and the dining room and service area. Our ability is to