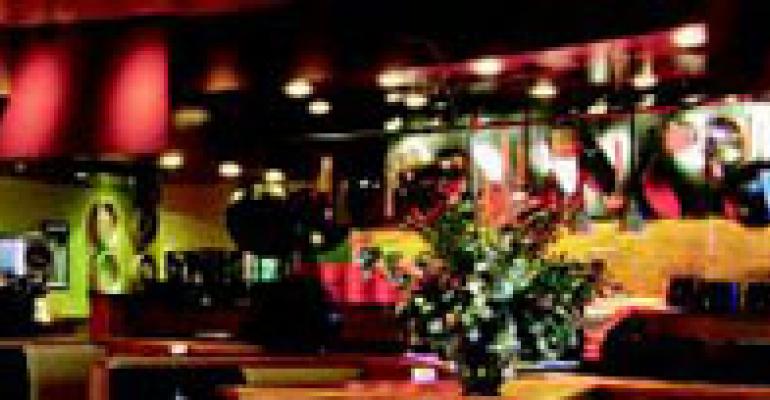 Perhaps the sportiest aspect of the restaurant industry involves the growth chains, which are like temperamental thoroughbreds with untapped potential. And like the ponies, some up-and-coming chains have what it takes to go the distance, and others do not. We talked to Bob Derrington, an equity research analyst at Morgan Keegan & Company; Andy Barrish, an analyst for Banc of America Securities; and John Hamburger, president of the Restaurant Finance Monitor, to ask which concepts they believe the smart money is betting on. Keep in mind that there's no such thing as a sure thing, but here are 10 growth chains bred for success.

Smokey Bones BBQ Sports Bar
Winner of RH's Richard Melman Concepts of Tomorrow Award in 2002, this Darden Restaurants concept continues to be one of the fastest-growing chains in the land. Its 2003 sales of $116 million are an increase of 110% over 2002. This is Darden's most promising growth vehicle, and an industry leader in terms of both percentage of sales and unit increases.

At the end of May this year there were 60 Smokey Bones units, 30 more than existed the same time last year. Barbecue has traditionally been a dangerous segment to play in, but Darden smartly married barbecue with a sports bar theme, broadening its appeal. Smokey Bones' large units can seat up to 250 guests.

Darden's strategy has been to enter areas of the country where penetration of barbecue restaurants is light, and then offer a barbecue experience that can cross regional borders. Its goal was to reject the stereotype and serve high-quality food in a wellscrubbed casual dining environment. The brand has accomplished this goal by replacing the traditional sports look with that of a mountain lodge theme. How good are its ribs? Good enough to place very well in several categories of the World Championship Barbecue Cooking Competition.

Chipotle
This concept, created by Steven Ells and now operating under a partnership agreement with McDonald's, is the fastest-growing in the fresh-Mex category. Chipotle's 2003 sales of $321 million are up 43 percent over 2002. With units in the range of 320, and plans to add 100 more this year, Ells and McDonald's have Chipotle on a steady and fast track.

Analysts are impressed with the concept because the operation and its menu are streamlined and extremely efficient. Everyone agrees that the driving force here is Ells, who is maniacal about his focus on using the best and freshest ingredients he can at price points that don't exceed $5.50. It's a passion that has created a legion of equally passionate customers.

When Ells made a deal with Niman Ranch to serve its free-range pork, Chipotle raised prices on carnitas burritos and tacos by $1. A move like that would be suicidal for most operations. At Denver-based Chipotle, sales of carnitas products grew dramatically. It's no wonder that same-store sales increased by 24.5 percent last year.

Panera Bread
Here is the fastest-growing player in the bakery-cafe category. It currently operates 637 units (184 company-owned, 453 franchised) in 35 states. It plans to open 145 new bakery-cafes this year. Panera's systemwide sales last year were up 29 percent over the previous year, and are expected to exceed $1.3 billion this year with units projected to total 747. Panera Bread, established in 1981, is the darling of analysts because its menu and food quality are superior, which translates to average unit sales rivaling those in the casual dining sector—$1.9 million per store. That's an impressive figure considering that half of its sales come at lunch, with a check average of a little more than $6.50. Unit-sales figures also happen to be 21/2 times greater than the average Starbucks, and 20 times more than that of McDonald's. Panera also delivers a 50 percent cash-on-cash return on investment. It's no wonder Business Week named it to its list of “100 Hot Growth Companies.”

Panera Bread's chairman and c.e.o. Ronald Shaich is highly regarded for his role in developing the company into the juggernaut it is today. He is the cofounder of Au Bon Pain, which eventually morphed into Panera, the pioneer of upscale artisanal breads on a fast-casual level. Despite the low-carb craze, Panera announced just weeks ago that it signed with two franchisees to develop 27 more units. Nevertheless, it has added several low-carb bread items to its menu.

Buffalo Wild Wings Grill & Bar
BW3, as it was once known, is a multiunit pioneer and the fastest-growing chain in the wing category. Founded in 1982 on the Ohio State University campus, it now has more than 250 units (143 franchised, 78 company-owned) in 27 states. System-wide sales last year were $365 million, a 29.4 percent increase over the previous year.

Analysts like Buffalo Wild Wings' positioning as more “sophisticated” than its competitors thanks to its image as a neighborhood restaurant that attracts families and a sports crowd. In addition to serving wings, it also offers an extensive menu of sandwiches and salads, which has gone a long way to convert its image from an old-boys' hangout to a family setting.

But Buffalo Wild Wings can play it both ways. Many of its newer prototypes have big screen televisions for sporting events, which keeps the crowds coming during nontraditional meal periods, when the neighborhood bar scene heats up. Analysts like the concept's ability to grow because of its franchising program, which is fueling growth. Last year, Technomic named Buffalo Wild Wings a “Top Ten Fastest Growing Restaurant Chain.”

Pei Wei
Here's another fast-casual entry: this one a noodle concept and an offshoot of P.F. Chang's China Bistro. Last year its sales grew by a whopping 270 percent. In 2002, it had 16 units and sales of about $22 million. In 2003, units more than doubled to 33 with sales of $55 million. This year the company has plans to open 20 more Pei Weis.

By any standard, this is one of the fastest-growing concepts in America, and it's doing it on the strength of average unit sales north of $2 million based on $9 check averages. Unlike many of its fast-casual counterparts, Pei Wei employs modified table service, meaning customers order at a counter and the food is brought out to them in the restaurant.

Many say its made-to-order menu items rivals that of its older bistro sibling, but at a fraction of the cost (though less protein-based). On top of that, analysts are impressed with its takeout business, which is 40 percent of sales, and its stylish decor, which is far more sophisticated than most fast-casual operations. This is a concept with unlimited potential.

Bonefish
Seafood has been one of the hottest segments in the last few years, and this concept, operated under a joint partnership with Outback, is doing swimmingly well. Bonefish, created by Chris Parker and Tim Curci, had a total of 37 units last year, more than double what they had the previous year. With Outback's financial backing, plans are in the works to open 35 more units of this dinner-only casual seafood house with white tablecloths.

Analysts are more than impressed by its average units sales of $3-$3.5 million. Check averages are in the vicinity of $30, which most customers consider a great value because of the high quality of its food, prepared over a wood-burning grill and served in a sophisticated setting.

Because seafood has been an underpopulated niche in the restaurant industry, Bonefish's potential is huge. And that doesn't take into account the growing desire of customers to eat more healthfully. Unfortunately, cofounder Parker was killed earlier this year in a boating accident.

Noodles & Co.
With all the talk about the sins of eating carbohydrates, you'd think a company named Noodles & Co. would be in deep doo-doo. Not so. In fact, this company, created by Aaron Kennedy nine years ago in Boulder, Colorado, is on a tear. It increased its units to 80 last year, a 38 percent increase over the previous year. This year it's approaching the 90-unit mark with plans to have approximately 200 locations by the end of 2006.

Earlier this year, the company announced plans to expand more rapidly through franchising, and has since signed three franchisees to build more than 80 units. Noodles & Co.'s growth also will be fueled by the addition of two new members to its board of directors, one the former c.f.o. of Brinker International and the other a consumer trend and youth marketing expert. Because of its strategic moves, Inc. magazine named the concept to its 500 list of America's fastest growing private companies three years in a row.

A big force behind this chef-driven concept is Ross Kamens, Noodles' corporate chef and the impetus behind the global noodle concept. In response to the aforementioned low-carb craze, Kamens has plans to introduce a variety of dishes that cater to the Atkins consumer. With or without carbs, Noodles is well positioned for the future.

Red Robin Gourmet Burgers & Spirits
It's called a gourmet burger concept, but what attracts the analysts to Red Robin is its universal appeal and its ability to drive success in every market it enters. Here's a family restaurant that's got enough funk to appeal to the younger generation.

Created in 1969 in Seattle, Red Robin has grown at a slow, but steady pace, ending last year with 198 units, 30 more than it had in 2002. With sales last year of $535 million, its average unit volume is an admirable $3-million-plus. The company plans to open up to 22 restaurants this year, while its franchisees will open another 16-18.

Red Robin's president and c.e.o. Mike Snyder is highly respected by the analysts, who say the company has thrived under his leadership. And though the concept's focus is its 22 gourmet burgers, it offers a wide variety of chicken and seafood entrees, soups and salads. Born in the same year as the Woodstock Festival, Red Robin Gourmet Burgers has proven it can rock with the best in the business.

McAlister's Deli
This is another fast-casual entry, one of the few delistyle concepts with plans to become a major chain. Created in 1989 by a dentist, its ownership changed hands a decade later when Philip Friedman led a management buyout. Since then, Friedman, a shrewd chain operator, has served as McAlister's c.e.o, president and c.o.o.

The concept calls on customers to order their food at a counter and then, if they chose, sit down in the dining room where they will be served by nontipped employees. With its high-quality menu that features traditional deli offerings, 17 vegetarian selections and check averages of $7, the concept is perceived by customers and analysts as an irresistible value player.

From 2002 to 2003, the concept grew from 101 units to 122, with sales of $127 million on average unit volumes of $1.1 million. When Friedman took, McAlister's was a $34-million company. He has since nearly quadrupled sales because of a great franchising program.

Cheeseburger in Paradise
Outback Steakhouse, which also operates Bonefish on this list, had thoughts of entering the fast-casual arena, but announced this year that it would pass, mainly because it believed it would be too difficult to attract quality employees because of the genre's notipping policy. (Don't tell Phil Friedman.) Instead, Chris Sullivan, Outback's chairman and chief executive, said the company would focus on Bonefish and a relatively new concept, Cheeseburger in Paradise.

This concept, based on Jimmy Buffett's famous song, is not in the unit number league of the others listed here, but one to keep your eyes on, particularly now that Outback and its partner Margaritaville Holdings are going to devote their energies to growing it. Cheeseburger in Paradise debuted in 2001 and features a Key West-style decor and a casual menu that offers a signature cheeseburger and fresh fish with a Caribbean flair. A fesitve tiki bar and live entertainment will add to the atmosphere.

The 6,650-square-foot concept, which now totals four units (in Virginia, Wisconsin, Illinois and Indiana) seats around 250 and has a check average of about $11. Cheeseburger has caught the eye of analysts who are blown away by its average unit sales of $4-$4.5 million. Cheeseburger in Paradise is a thoroughbred just getting out of the gate.