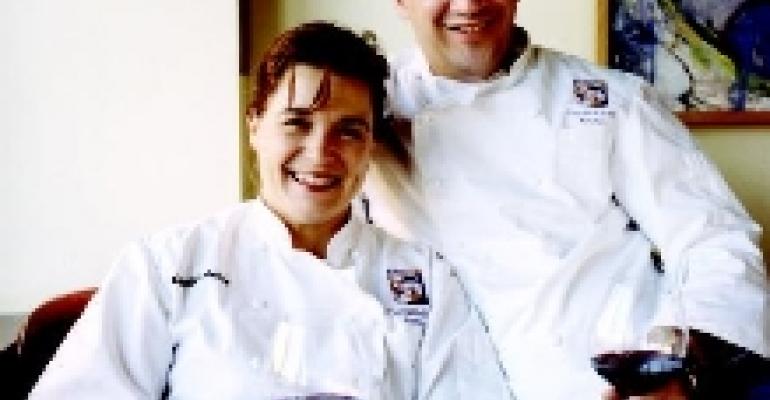 Do you think you could work elbow to elbow with your significant other? Chefs John and Caprial are doing just that and making it look easy.

Extraordinarily talented, creative and passionate about cooking, Caprial and John Pence are celebrity chefs, authors, teachers, parents and a loving husband-wife team. From their home base in Portland, Oregon, where they revel in the bounty of the great Northwest, Caprial and John have become culinary stars for their brilliant regional cooking. Together, the couple has amassed numerous awards, launched a cooking show, a cookbook series, a restaurant and a family, leaving countless fans wondering: how in the world do they do that when so many other couples have failed?

What did you do on your first date?
"When I met John in cooking school through a mutual friend," says Caprial, "he asked me to go to a culinary demonstration with him."

"I didn't have a lot of money at the time, and the demo seemed interesting. So our first date was an Asian vegetable carving class," says John.

"I remember we had to bring our own paring knife and we carved carrots together," says Caprial.

"Needless to say, our first date set the tone for the rest of our marriage," says John.

You've been married for 21 years; you work side by side with just about everything you do; how do you do that?
"I think it helps that we like each other," says John. "Since the start of our professional careers, we've worked together on and off," says Caprial. "We've developed along parallel lines. We're sort of opposite sides of the same coin. I enjoy handson cooking and recipe development..."

"...and I like the administrative and business development of the restaurant world," says John.

Before your cooking show was Caprial and John's Kitchen, it was Caprial's Cafè, what made you decided to bring John on the show?
"Capi had started the show as a solo act," says John. "The show was called "Caprial's Cafè" and debuted on the Learning Channel in 1994. Eventually, Caprial's Cafè moved to Public Television under the new name "Caprial's Cooking for Friends.""

"After about seven years, we were looking for a way to change the show around," says Caprial. "We brought John on and renamed the show to "Caprial and John's Kitchen: Cooking for Family and Friends." The idea is to encourage people to cook for themselves and for their families. We're trying to take the 'chefness' out of cooking. It's not a stir the pot kind of program like Caprial's Cafè."

"People also enjoy the husband and wife aspect of the show," says John.

Why is that?
"We don't always agree," says Caprial. "And we don't hide that on the show. When we come to something we disagree on, we argue until we come to a compromise and in the end we create something we're both pleased with." "Some people think we fight too much!" adds John.

What makes you, as individual chefs, unique?
"I don't think there is anything that is super specific to each of us. We've worked together for so long I think we have developed very similar styles," says John. "If I had to draw a distinction, I would say that Capi likes bread and desserts and I lean more towards entrèes."

"Cooking is a profession, but it's also a passion," says Caprial. "Both John and I love to try new things."

Are there any foods you don't like?
"I hate beets," says Caprial. "John doesn't like fresh tomato."

"I'll eat salsa," adds John, "just not fresh tomato. And I'm not a fan of olives, either."

What about your kids? Are they as adventurous as you?
"No, but I would say our daughter (14) is more adventurous than our son (18), she'll at least try new things. But they're both pretty boring when it comes to food exploration. Our son especially. He's squeamish about new foods," says Caprial.

When you eat out, where do you go?
"We tend to go to more ethnic restaurants when we eat out," says John. "But we don't eat out all that often. When you spend most of your time in a restaurant, home becomes really appealing."

Why did you name your restaurant Caprial's Bistro? Instead of Caprial and John's Bistro?
"It was all John's doing," says Caprial. "It started as the West Moreland Bistro, named after the neighborhood," says John. "As Caprial's Cafè was getting more and more popular, people would call the bistro asking for Caprial's Cafè, so we decided to make a brand of her and rename the restaurant to "Caprial's Bistro."

How do you stay fresh?
"We travel a lot, we read a lot, we cook a lot," says John. "We hang out with other people who cook a lot."

"The cooking classes we teach in the restaurant are also a great place to test new things," says John.

When you're not cooking together, what do you do for fun?
"We work in our garden," says Caprial. "And we spend lots of time with our family and friends. John also likes to build things."

"I like to make water features (fountains)," says John. "We have an outdoor kitchen, so I like to build things around that."

Do you have any chef heroes?
"I have people that I admire," says Caprial, "Julia Child, Anthony Bourdain, but I think many celebrity chefs are a pain."