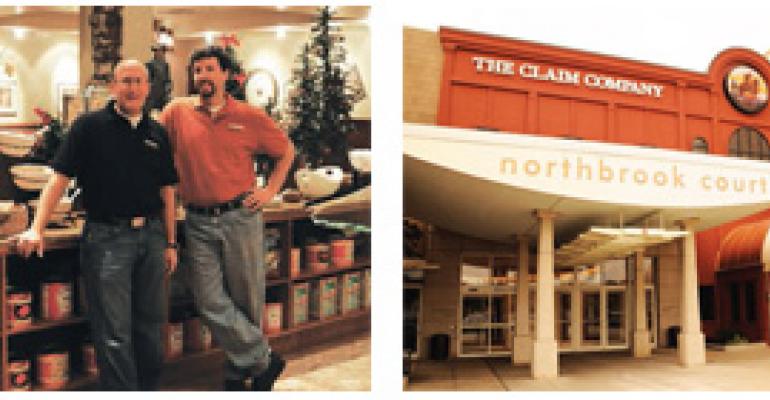 As the retail real estate industry transforms in the wake of the recession, mall and shopping center owners are building relationships with the kinds of tenants they might have ignored 5 or 10 years ago.

Restaurant operators only gained acceptance as mall tenants in early 2000s. Their parking needs, long hours of operation and heavy cleaning requirements were previously seen as a burden. Gradually, however, retail landlords began doing business with large national chains like the Cheesecake Factory and P.F. Chang's China Bistro and enjoyed great success in the process.

Today, many landlords are taking the next step by targeting smaller, independent restaurateurs, many of whom have no experience operating in a shopping center environment. Why now?

One explanation is that restaurants have bounced back from the recession more quickly than retail operators and are currently among the best drivers of traffic for retail properties.

Another reason is that independent restaurants bring with them a sense of uniqueness — an element that traditional malls and shopping centers are often criticized for lacking, says Matthew Harding, president and c.o.o. of Levin Management Corp. “Restaurants create life and activity in a shopping center and a good independent restaurant can really develop a loyal following,”he adds.

On the flip side, independent concepts that operate only one or two restaurant locations can benefit from the added exposure and customer traffic a shopping center environment provides, as well as from the marketing savvy of an experienced landlord, notes Robert Catania, owner and president of Wicked Restaurant Inc., operator of Wicked Fire Kissed Pizza. Catania has one restaurant at South Cape Village in Mashpee, MA, and just opened at another mall in Dedham, MA.

Landlords often make independent restaurateurs' lives easier by guiding them through the building and operating permit procurement processes and by helping with marketing. For instance, obtaining a liquor license can often be challenging, particularly if an eatery is in a setting that has a large number of restaurant concepts. There might be a limit on how many establishments can get permits.

“Sometimes you have to learn those things the hard way and it takes longer,” Catania says. “So it's kind of like having professional consultants built in.”

Mall and shopping center owners with large portfolios also tend to be media-savvy. For instance, Levin Management recently brought a new Indian restaurant called Thulasi to its Centre Plaza property ouside Philadelphia. Before opening, the owners aimed their marketing outreach primarily at Indian customers. Levin suggested they broaden the campaign to non-Indians to boost traffic. Levin also issued a press release announcing the restaurant's opening to local media outlets, hoping to attract both new customers and restaurant reviews. It followed up with a special advisory for food editors and restaurant reviewers.

“The advantage of dealing with a professional company is that you have a track record there of people who know how to market their property, which concepts fit in and which don't,” says Catania. “They spend a long time to get the right balance.”

Small restaurateurs sometimes also need guidance on maintaining HVAC and plumbing systems or removing trash properly because they might not be used to sharing trash facilities with other tenants, notes Harding. The ins and outs of everyday operations are usually spelled out in the lease before the restaurant opens.

To subsidize high start-up costs, some landlords offer free rent during the restaurant's first year. In exchange, the restaurant operator might be asked to sign a slightly longer lease than a traditional retailer so the landlord can recoup the initial investment.

This story and interview appear courtesy of Retail Traffic, a Penton Media publication.

Retail Traffic: What qualities are landlords searching for in vetting perspective restaurant tenants?

Haback: You're looking at the expandability of it. Is this concept something that can work in additional locations — whether it's one more or 50 more. Certain concepts will work some places better than others. A restaurant with a $100 average check is not going to work many places. But a concept that has a menu broad enough to work on a Tuesday, when a customer may want to simply go out and grab a sandwich or burger and glass of wine, as well as on a weekend when a customer may want to spend more, is worth a long look.

We also look at their infrastructure. Do they have the capability to expand? Have they brought on the additional management expertise that they need to open the second or third location without harming their existing store or stores? In addition, you have to look at their financial documents. Do they have the wherewithal to grow and the operating capital to sustain growth depending on where they are growing?

RT: What are the differences small restaurateurs need to know about in operating in a shopping center as opposed to running a standalone location or one that's in an urban setting?

Haback: The largest difference in expenses is that you have to deal with common area maintenance (CAM) and perhaps some other charges that you may have not had to deal with previously. If a restaurateur had owned their own building, they get a separate real estate tax parcel and had the ability to fight that. They also took care of maintenance themselves. But now for the first time they may have another party — a landlord — that's giving you those bills. You may feel like you have less control over some of these expenses.

On the other hand, what you do get is a built-in customer. Most regional malls have anywhere from 7 million to 30 million people per year coming to a property. If you are in a little town or in a freestanding location, people are coming to you frequently only because they've made the decision to come to you. If you are in a location with 100 retailers and some other restaurants and department stores, people are going to be coming to that location for many, many reasons.

RT: Beside common area maintenance (CAM) charges, what do tenants need to know about leases?

Haback: There are other rules and regulations that you probably don't have if you're freestanding. Perhaps you need to have some sort of special exhaust because the food odors can't get into the common area. There may well be additional requirements including rules about hours.

On the other hand, there now may well be things that you don't need to take care of, such as exterior maintenance, taking care of a parking lot, security. There's a purpose for CAM charge and it does take a lot of items off of your plate. You can focus on the business of running a restaurant rather than get involved in areas where you may have less of an expertise.

Sometimes, as well, there is the ability to offer tenant allowance money. That can help with build-outs and remodeling costs. That's available depending on the financial wherewithal of the tenant. We want to know ultimately that they will be able to pay the rent, but it's absolutely something that is open to discussion and negotiation.

RT: Why do mall companies like to bring in unique operators in addition to working with the larger chains?

Haback: It's a point of difference. You want a property to be thought of by your customer as being their property…. by bringing in these tenants we are giving you more reasons to come to our shopping center.