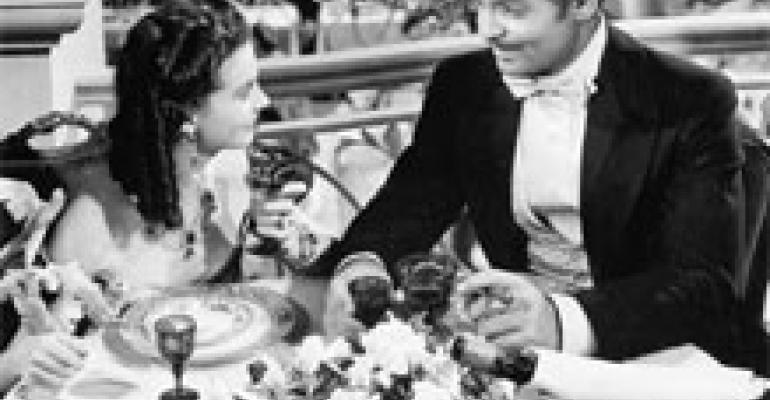 Gone With the Wind, a 1939 film based on the novel by Margaret Mitchell, remains one of the most popular movies of all time. Starring Vivian Leigh as Scarlett O’Hara and Clark Gable as Rhett Butler, the action takes place during and after the American Civil War.

Food writer Rita Grabowski, who with her husband Gary cooperated Miracles restaurant for more than a decade in Cleveland until it closed in 2000, talks about her favorite food scene from this movie. “Just before intermission, Scarlett is silhouetted against the colorful sky. The starving Scarlett digs up a carrot, gnaws on it, and vows, ‘As God is my witness, I’ll never be hungry again.’”

Wartime food shortages are too severe even for someone like Scarlett who watches her waistline. “One of Scarlett’s highest priorities in life was to be able to maintain an 18- inch waist. Of course, she was helped out by being corseted,” Grabowski points out.

However, if Scarlett O’Hara had known how to cook, she could have enjoyed a more fulfilling eating experience than one shriveled carrot yanked from the earth. Grabowski says, “Even though the ‘damned Yankees’ had probably made off with most of the pantry supplies, I’d like to think there might have been some dried lentils, an onion or a little bit of celery, or maybe even just a sweet potato or a yam. Then Scarlett could have made a lentil stew.”

Grabowski suggests an accompaniment, too. “My all-time favorite accompaniment is corn bread, baked in a cast-iron skillet. And, if they were able to save a lemon, they could have added a little lemon zest to the recipe and had a bit of a celebration, even though it was a tense and unhappy time.”

For the podcast with Rita Grabowski and Gail Bellamy, visit www.fmflicks.com and click on the podcast icon.