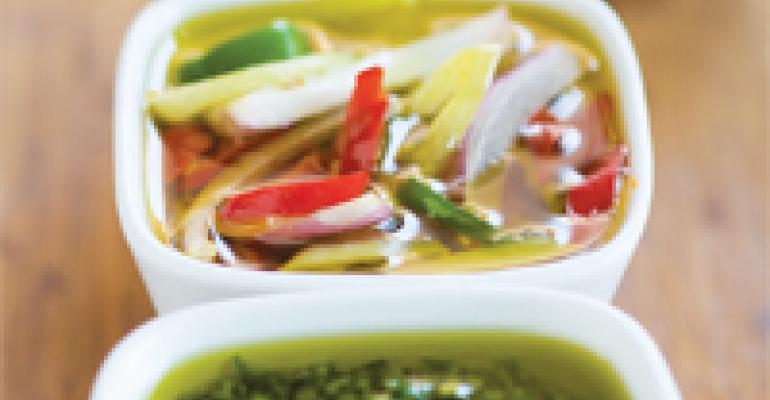 The latest concept from Tavistock Restaurants, ZED451, defies easy description. The difficulty occurs because it doesn't fit neatly into any existing category, which is exactly what Tavistock intended. ZED451 breaks down the barriers between the front and back of the house and strives to evoke the atmosphere of a sprawling party at someone's very nice private home.

The experience combines an international buffet with tableside service provided by chefs. The price is fixed at $49 for dinner and brunch. The buffet is displayed on “harvest tables” offering seasonal soups, artisan cheeses, breads, charcuterie, salads and side dishes. For the main course, employees dressed in chef's whites present and serve distinctive flame-grilled specialties tableside, with choices such as citrus salmon, aged grilled rib-eye, goat cheese-encrusted rack of lamb, slow-roasted short ribs and Parmesan-crusted pork loin, along with a daily fresh fish. Guests at each table are also offered a choice of two hot side dishes, such as roasted wild mushrooms, Gruyere bread pudding and cauliflower au gratin. Desserts include seasonal, comfort-inspired choices such as fresh fruit cobblers and house-made ice cream, crème brulee, cookies and more. ZED451 also offers brunch every Saturday and Sunday.

“We spent an enormous amount of time on the style of dining — the guest-controlled experience, no ordering or waiting — as well as the risk-free aspect of the adventure,” says Daniel Harf, Tavistock's c.o.o. “If you haven't tried bison, or elk, or wild boar chops, or fennel — you can.” Similarly, the interior is deliberately structured to encourage different experiences — mussels and cocktails on the rooftop, wine and charcuterie in the wine bar, communal tables in the main dining room — so a guest could visit 10 times and never taste the same thing twice.

Emeryville, CA-based Tavistock Restaurants built ZED451 on the foundation of Sal & Carvao, a group of three Chicago-area Brazilian steakhouses it bought in 2005. Once it took over the three units, management determined that the concept wasn't universally appealing — its meat-centric focus was a turnoff for a lot of women. So the menu was broadened, the décor modernized and the service style adjusted to soften the vibe.

A big challenge early in the game has been getting the public to recognize ZED451 as something other than a churrascaria. The opening line of a positive review in the Chicago Tribune called it a Brazilian steakhouse, so even a seasoned critic has trouble seeing the difference. “I think people tend to think in derivatives, says Harf. “You always want to know what it's like — to compare it to something else. It will take a little time for people to understand what it is so they can describe it.” He likes to describe the dining style as “innovative abundance.” “You get to sample unlimited things. And visually, it's extremely abundant,” he explains.

Guests enter ZED 451 via a two-story glass atrium outfitted with a black slate tile floor, dramatic fireplace, lush greenery and a sweeping staircase that leads up to a rooftop lounge with its own fireplace and bar. Within the 13,000- to 18,000-square-foot footprint they encounter a cozy lounge; wine room with an intimate central table and 12-seat wine bar; a dining room with communal tables and a circular fire pit set in the middle of the room; an open kitchen with counter seats; patio seating; and a second-floor intimate dining area with deck and fireplace . “ZED451 is comfortable, but balancing that sense of ease are unique, edgy elements that provide guests with a little discovery and adventure as well,” says Chris Smith, the architect. Harf says the first response he hears commonly is “wow,” adding that “females tell me that they want their house to look like this.”

The first two ZED451s debuted in 2007 in suburban Chicago, but they are now history. The company used them to test out the new concept, and they couldn't accommodate some of the signature elements of the brand, such as the communal dining tables, a chef's table and upscale outdoor space. The first new location opened in Chicago last April, followed by a second in Boca Raton last fall. Additional units are under construction in Boston and Orlando; both are expected to open in 2010. Late last year Harf said Tavistock's initial goal was to reach 30 units, although that was before the economy went south. Long-term, the company believes ZED451 has significant potential.

A significant challenge in building out the ZED451 brand is staff development. Because staffing does not follow the traditional front of house/back of house divisions, Harf says hiring has been a challenge. “We hire based on chemistry and personality,” he explains. “We would take someone who has the right personality before someone with the right experience, but not the fit. We can train someone in how we do things, but we can't give them a personality and the hospitality gene.” Once hired, employees are constantly reminded of the culture ZED451 is trying to build.

To succeed, hires need to buy into the “welcome to my home” vibe, from the initial greeting to the food delivery. Guests relish the interaction with the people who create the food, Harf says. And bringing them out of the kitchen lets them share the passion they feel for what they've made, a chance to say “try this,” just as a good host/hostess would do at home.