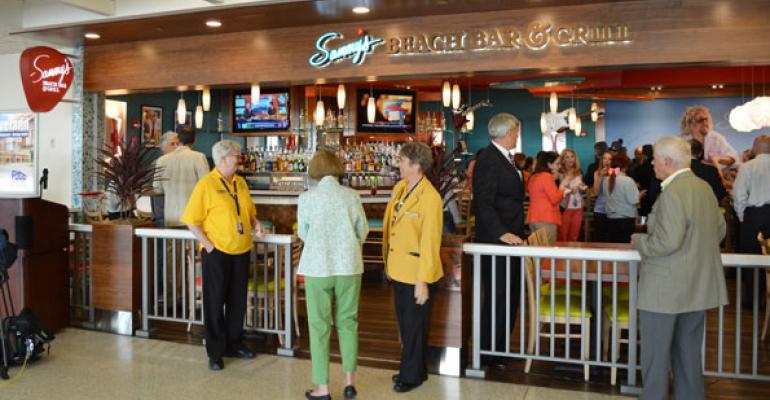 The ballads that Sammy Hagar wrote, the ones that became monster hits through the ’70s and ’80s, were songs in which he poured his heart and soul. The former Van Halen frontman has said when he sang those songs he often would give himself goose bumps.

That same passion Hagar had for rock ballads has carried over into a number of other industries, namely liquor and restaurants. A flourishing tequila brand led to the Cabo Wabo Cantina concept with locations in Cabo San Lucas, Mexico; Las Vegas; Lake Tahoe and Hollywood. When Hagar got tired of drinking tequila he created a rum, which led to a whole new restaurant concept called Sammy’s Beach Bar and Grill.

The Red Rocker was in Cleveland recently for the opening of his fourth Beach Bar location. He’ll release a new solo acoustic album soon and is planning upcoming tours with two of his side projects—Chickenfoot and Sammy and the Wabos—but he took time to cut the ribbon at the restaurant’s grand opening in Cleveland Hopkins Airport because he says the concepts truly mean something to him.

“I’m totally involved; everything I do I’m a hands-on guy, I can’t help it,” Hagar says.

At the Beach Bar locations, Hagar’s fingerprints are evident throughout the menu and design.

“The idea is to keep it at a reasonable price, which is really hard to do in an airport because there are economics involved. So I stay out of that business, but I try to keep things within budget,” he says. “I don’t mind if someone pays $3 extra for that dish and they say, ‘Wow, that’s really good.’”

In addition to his passion for food and cooking, Hagar has learned a thing or two about quality food along the way from his good friends Michael Symon and Emeril Lagasse, each of whom have given him recipes.

“Of all the famous chefs those two guys are my dear friends,” Hagar says. “I say, ‘Hey, I want to make this burger just taste really special,’ and they say, ‘What kind of flavors do you like?’”

For the Beach Bars, Hagar suggested smoked paprika and cumin, so Lagassse helped him create a blend of spices to rub on the burgers before they’re grilled.

“Then you grill it and put it between the bun and people go, ‘Wow, this really tastes good,’” he says. “They’ve got a lot of good little tips.”

Hagar partnered with HMSHost, a highway and airport food-service company that operates concessions at airports, rest stops and entertainment venues, for the Beach Bars.

“The food and drinks are about as good as you can do in an environment like this,” Hagar says. “The reason I went with Host is because they kind of invented raising the level of airport food.

“Back in the ’70s when I was touring and going through airports all the time, man you’d have a hard time finding a good hot dog,” he continues. “So now you can find good food.”

Because music and liquor brands are his two cash cows, Hagar generously donates all of his restaurant proceeds to charity.

“It isn’t for me to have more money or more fame or fortune, it has nothing to do with that. I use my name because it works,” he says. “The (Rock & Roll Hall of Fame) here has a wonderful charity that helps children who want to play music, children who have problems. Music has saved my ass more than once, let me tell you. It’s easy to have problems and if you play music it really helps because you have something to do and it keeps you off the streets.”

Bottom line: If Sammy Hagar is involved in anything, you know it’s going to be driven by passion and at high rates of speed. Over 55 mph, to be exact.