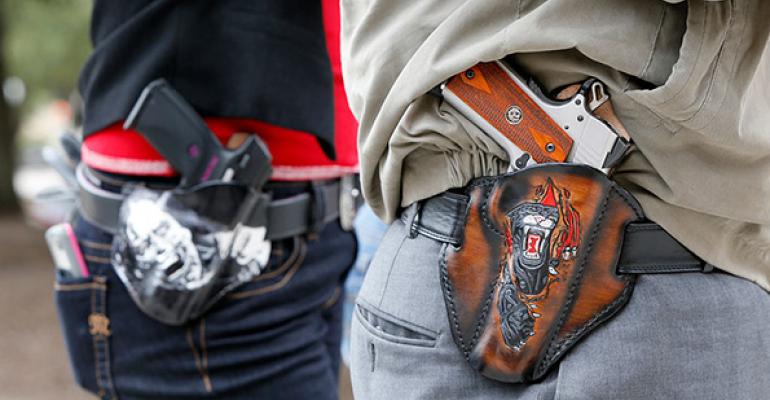 Should guns be allowed in your restaurant?

I’m a big fan of the Second Amendment. I wish we could go out together and have a drink. However, I’m a white-collar city boy who freaks the f*** out when I see a gun. It’s one reason why I’ve favored laws that required one to conceal their gun. Out of sight, out of mind.

As of January 1st, a new Texas law allows licensed individuals to carry firearms openly on their person, except in specific locations (one of them being businesses that derive more than 51 percent of their income from the sale of on-premises alcoholic beverages). Prior to January 1st, Texas law required licensed holders to conceal their weapons. It’s not unlikely that many states will follow suit. Most states now allow one to conceal a weapon.

Nevertheless, the sight of people sitting in a restaurant with a visible gun would get me more agitated than watching my apathetic server texting on her cellphone. Cornelia Wilder, who runs Funky Art Cafe in Brenham, TX, says she spoke with a gentleman who runs a handgun certification class and he thinks little will change in Texas because of the new law. He thinks that in a gun-related scenario, the perpetrator would likely shoot a visibly armed person first, so those who carry a concealed weapon will likely continue to keep their guns undercover.

“All I ever wanted to do is prepare good food, make a good cup of coffee and sell a gift or two,” says Wilder. “Who knew gun control would become one of my many duties?”

You do have options. As a private business owner you may prohibit firearms (concealed or open carry) in your place. You can do that verbally with each customer who enters, but the better way to go is to have your policy displayed on a poster at each entrance. If you are going to prohibit arms, you must use specific language, according to attorneys-at-law Monty & Ramirez. Your posted notice must be in both English and Spanish and appear in contrasting colors with block letters at least one inch in height. It must also be clearly visible at all entrances. In any case, it’s important that you review your safety and violence prevention policy with employees, the firm says. Here’s a link to the Monty & Ramirez site where you can find information about the new Texas open carry law: http://bit.ly/1n1YehY

This is a damned if you do, damned if you don’t scenario. If you prohibit guns, then you’ll alienate those who do carry (and there are probably more than you think). And if you allow firearms, those who want to eat in a gun-free zone may go elsewhere to eat. I’d like to hear from those of you who have had to deal with this situation. How have you handled it from a logistical standpoint? Did you post signs and how did customers react? Have you had an incident, peaceful or otherwise, involving guns? Your advice is welcomed. Please email me at [email protected].