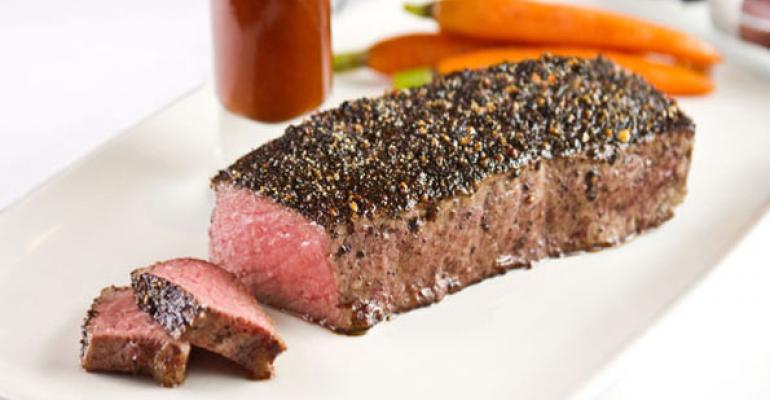 It’s smart to pay attention to the food trend prognosticators who keep their fingers on the pulse of the restaurant world. They’re experts at telling you what’s new and what’s next in the world of food and drink. But point-of-sale data is critical, too, and 2012 full-year numbers from GuestMetrics show that an increasing number of restaurant patrons still desire little more than a stiff drink and a slab of beef when they eat in a restaurant.

That’s the conclusion that can be drawn from two sets of data the company released last week. Its compilation of POS data covers $8 billion in transactions and more than 250 million guests checks from U.S. restaurants and bars.

Beef, particularly steak, had a good year in full-service restaurants. Although the gourmet burger category generated a lot of energy and excitement, whole muscle cuts like steaks still showed growth.

“In analyzing the 64 percent of tableservice restaurant sales that come from food, we see that steak had a strong year in 2012,” says Bill Pecoriello, GuestMetrics c.e.o. “Based on our data, steak revenues were up about three percent, the net result of the number of steaks ordered being up one percent despite prices being two percent higher than 2011 levels, likely at least partially due to the drought last year. Given steak has one of the highest average price points of any food item, the uptick in steak sales should be particularly beneficial to restaurant operators.”

What customers are ordering more of now: ribeye, filet and veal. “Sirloin sales actually contracted from levels seen in 2011,” Pecoriello points out.

Of note: the average price of a steak in GuestMetrics’s database was $23. Four other popular protein items on average cost more—lamb ($33), halibut ($32), duck ($27) and lobster ($24). Sales of these latter items contracted in 2012, according to GuestMetrics data.

On the beverage front, predictions of increasing interest in brown spirits appear to be coming true. Here’s what Technomic had to say on the subject when making trend predictions at the end of last year.

“Whiskey wows: From whiskey-flavored liquors to flavored whiskeys, and from single barrel bourbons to new takes on rye, whiskey’s appeal grows. In bars and restaurants, the storied brown spirit attracts more young adults and women, while consumers experiment with both traditional and new expressions for at-home enjoyment.”

That’s what POS data shows, too.

“In analyzing the over 3,000 spirits brands sold in on-premise, brown spirits took about a point of share from clear spirits in 2012 versus 2011,” says Pecoriello.