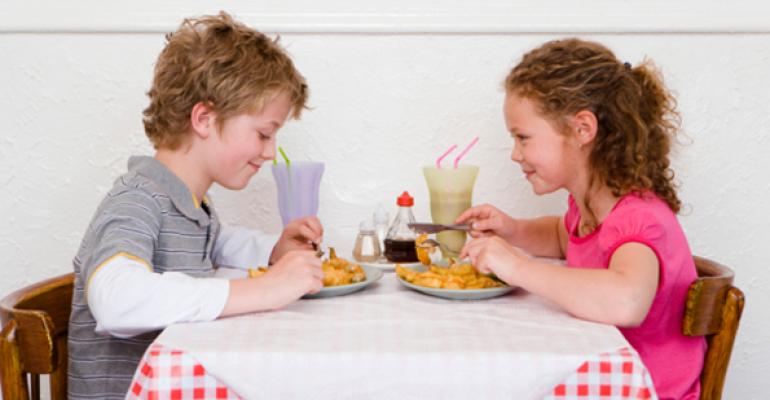 Kids' dining: Time to get on board with babies?

The issue of how far restaurants should go in accommodating patrons who bring very small children into high-end restaurants lit up the media—social and otherwise—last week after a couple showed up for their prepaid dinner ($475 for two) at chef Grant Achatz’s Alinea in Chicago with a crying baby in tow. Alinea has three Michelin stars and is ranked by experts as the sixth-best restaurant in the world. Although some dubbed the incident a yuppie crisis relevant only to members of the one percent, the event’s aftermath suggests that the family-friendly restaurant segment offers more potential than many operators might think.

Here’s what happened at Alinea. A young child began to wail loudly at one point during the four-hour-long meal and not everyone was pleased with the how well the parents handled the crying bout. Neither Achatz, who could hear the disturbance in his kitchen, nor his patrons, many of whom emailed him later to note their dissatisfaction with the crying baby aspect of their very expensive Alinea experience, were happy.

How did a baby get into Alinea in the first place? The parents had already paid in advance for their meal, and most Internet reports say that when the couple’s baby sitter cancelled at the last minute, the choices were to write off the money already paid for the dinner or to bring the baby along.

Circumstances put the parents in a tough spot. But not as tough as the one Achatz found himself in the next day.

Here’s what the chef tweeted about the incident:

The story went viral on social media, and Achtaz was soon explaining himself on national TV. “I could hear it crying it in the kitchen,” Achatz told ABC’s Good Morning America. “We want people to come in and enjoy and experience Alinea for what it is, but we also have to be cognizant of the other 80 people that came in to experience Alinea that night.”

The notion of bringing young children to restaurants turned out to be a hot-button issue for many people. Quite a few think operators should somehow intervene to make sure it doesn’t happen in ambitious, expensive restaurants.

But from the point of view of operators in other segments, parents with young children are a big market that can be worth going after. There can be a middle ground and it may well be worth an operator’s time to find out which set of kid-related policies work best for his or her particular operation.

In fact, it may even be worth going after the family segment exclusively by putting a strong focus on kids instead of their parents. Child-centric restaurants like Bean Sprouts Cafe, which has three units now and aims to have 75 soon, hope to find success with this approach.

L.A.-based Giggles N’ Hugs already has. It goes further on the kid-friendly scale with an over-the-top play and entertainment area at its three stores. Its pitch is one harried parents love: “Giggles N’ Hugs is a restaurant where your kids are expected to run around. Sippy cups are welcome; screaming is practically required. It's full-service fun.”

Where should your restaurant fall on the adults only/kids first spectrum? Unless your chef is as talented as Achatz, it could be smart to fine-tune your restaurant’s level of family friendliness so it syncs up with the expectations of your customer base.