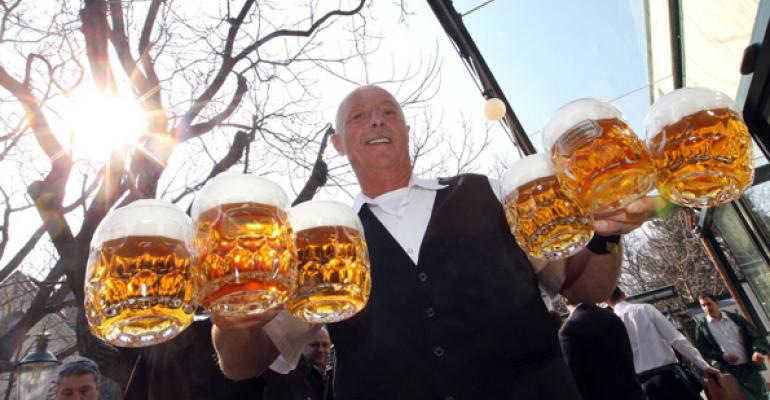 Having a curated lineup of small-batch brews or a beer list that offers hundreds of labels in bottles or on tap are two well-proven ways restaurants can keep their beer-drinking customers coming back. But consider these two options if you want your bar to stand out from the crowd: frozen beer from Japan and a hangover-fighting brew from Australia that incorporates the electrolyte-replacement capabilities of a sports drink.

Kirin Ichiban Frozen Beer, which has been on sale at Dodger Stadium and Japanese restaurant Chaya in Los Angeles all summer, is slightly misnamed. The beer itself, while very cold when served, isn’t frozen; its foamy head is.

Serving this beer is a two-step process. First, the glass is filled almost to the top with Kirin Ichiban draft beer, a premium import from Japan. Then, the nearly full glass is placed under the dispensing spout of a Kirin Ichiban Frozen Beer machine that’s similar to a soft-serve ice cream machine. It dispenses frozen beer foam that has been cooled to 23 degrees. The foam acts as a lid, keeping the beer beneath it chilled for one half-hour.

Kirin says the foam is made using a patented, innovative frozen stirring technology dubbed “frozen agitation.” Air is blown into the beer as it is continuously stirred and chilled.

It’s a proven process that has already gone mainstream in Japan.

"The frozen beer was first introduced last year in Tokyo and quickly became a huge hit, served at more than 1,300 restaurants in Japan," says Randy Higa, president of Kirin Brewery of America. "After test-launches in Honolulu and Orlando and overwhelmingly positive feedback, Kirin Ichiban Frozen Beer is ready for a larger presence in the U.S. We couldn't think of a better place for this beer to make its California debut than sunny Los Angeles."

The novelty factor for frozen beer is high, but we can see many, many customers giving it a try anyway. Given a hot day, certain operations could have trouble pouring these beers fast enough, depending on how it is priced. A frozen beer cost $8 when introduced at Epcot’s Japan pavilion in Orlando last year. It goes for $10 a glass at Dodger Stadium now.

We don’t yet know how much a beer that adopts the hydration process being developed by researchers at the Griffith University Health Institute in Australia would cost. But such a product could find welcoming acceptance among beer-drinking customers looking to rehydrate after vigorous exercise or simply knock back a couple of tall cool ones on a hot summer day.

It’s likely these customers already drink beer in these circumstances. But Griffith researchers have found a way to add electrolytes to beer while slightly dialing down its alcohol content, all without affecting flavor. The end result: better hydration for the beer drinkers, which in turn should mean no hangover.

These experiments were conducted by adding electrolytes to off-the-shelf beers. So in theory any brewer could do the same and begin marketing their brand of hydrating beer in a hurry.

“Of the four different beers the subjects consumed, our augmented light beer was by far the most well retained by the body, meaning it was the most effective at re-hydrating the subjects,” Griffith researcher Ben Desbrow tells the Australian Times.

We can see a product like this becoming a strong-selling item in many restaurant bars. A beer that prevents hangovers without compromising taste—that’s getting close to the holy grail of the brewer’s art. But will some antialcohol activists complain that a hydrating beer encourages too much drinking?

“If you’re going to live in the real world, you can either spend your time telling people what they shouldn’t do, or you can work on ways of reducing the danger of some of these socialized activities,” Desbrow argues. We say that if—or more likely, when—you get a chance to stock a hydrating beer at your bar, do it.