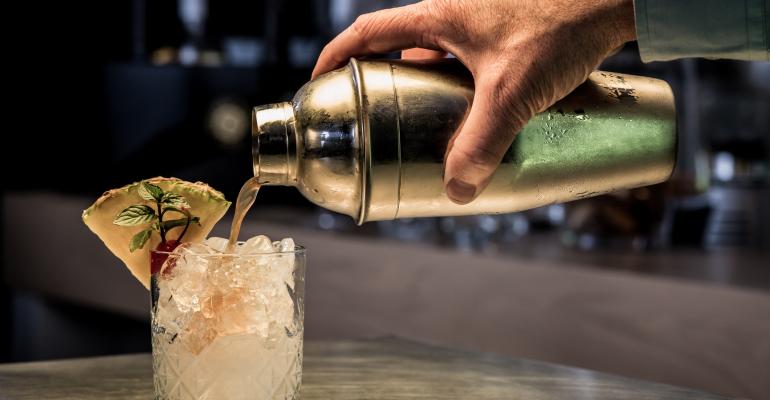 But since no restaurant bar can offer everything in this massive category, it’s wise to know what’s selling well now and what’s trendy on the beverage alcohol landscape.

Premium potables are in … for now

Susan Wahl, vice president of American whiskeys at Bardstown, Ky.-based Heaven Hill Distilleries, credits the shift to two things: “We’ve seen an increase in wealth across the U.S. for at least 10 years now, and when you can buy and drink some of these amazing whiskeys, you feel good doing it.”

Price also drives quality perception, she added. “You buy and put these bottles on the back bar at a restaurant so customers can see it. You want to impress them, and they make a statement.”

Not surprisingly, these attractive attributes are applicable to most any beverage alcohol category. Celebrity-backed tequilas and vodkas are immensely popular. Wine and beer geeks hunt hither and yon for new and exotic releases after tasting them first at restaurant bars.

Could inflation and other economic headwinds slow the premium trend? Depends on who you ask. While sales at off-premise locations (beer, wine and spirits shops) soared during 2020’s Covid lockdowns, consumer purchases of beverage alcohol has swung back to on-premise accounts, said Chris Zaborowski, co-owner of Westport Whiskey & Wine, a high-end alcohol retailer in Louisville, Ky.

“During lockdowns, we were the easiest beverage option,” said Zaborowski. “Now the opportunity is squarely on-premise.”

According to IWSR, a London-based global beverage market analysis firm, research of 17 developed nations showed the premiumization trend unaffected by inflation—for now. According to a November 2022 report, the firm stated any significant impact on personal finances ultimately will trickle down to personal spending decisions that could steer drinkers to lower shelves.

When examining sheer sales growth, American whiskey and tequila and mezcal are on a tear. According to the Distilled Spirits Council of the United States (DISCUS), in 2021, 9-liter case sales of American whiskey hit nearly 30 million (more than double that in 2003) while case sales of tequila and mezcal hit almost 27 million (triple that in 2003). Still, vodka sales dwarfed both: 78.1 million cases in 2021.

“What’s that tell you?” Zaborowski asked. “People like their vodka cocktails.

“But if you don’t know that tequila and bourbon cocktails are red hot, you’re living under a rock.”

Operators who don’t are also missing out on great heritage plays in tequila and whiskey, said Justin Thompson, co-owner of Justin’s House of Bourbon, a buyer and seller of vintage American whiskey in Lexington, Ky.

“People love those old bottles’ and brands’ histories, which can drive up a bottle’s value, too,” Thompson said. “Being able to sell somebody a pour of a hard-to-find drink is something most restaurants do with wine only. They’re missing an opportunity for a profitable sale when they don’t.”

Speaking of wine, sales of American wines remains massive: 452 million cases in 2021, up 3.8 percent over 2020’s 435 million total. Grandview Research in Dublin, Ireland, predicts those trends to continue upward at a compounded annual growth rate of 6.8 percent by 2030.

Perhaps expectedly, nothing tops beer sales in the U.S. According to The Brewers Association, American beer sales hit a robust $100.2 billion in 2021, 66 percent of which came from large, non-craft domestic operations. Thirteen percent came from craft brewers, and imports accounted for 21 percent of total sales. Overall, the category grew a modest, but reliable 1 percent.

“Craft is still a small portion of that total, but remember, craft beer hardly existed until the 1990s,” Zaborowski said. “Whoever thought that beer-paired dinners at restaurants would become such cool things?”

From damp to dry and wet again

Industry watchers are tracking reduced-consumption movements like Sober October and Dry January—what some call a "damp" period in which drinkers take a break from beverage alcohol. For restaurant and bar owners, such pauses present opportunities to serve mocktails.

According to New York-based Veylinx Research, 46 percent of American drinkers are trying to reduce alcohol consumption, and 52 percent of them are replacing alcohol with non-alcoholic beverages.

“People trying to cut down their drinking are finding more and more alternatives on retail shelves and in bars and restaurants,” said Anouar El Haji, CEO of Veylinx. “Our research found that they're willing to pay premium prices for non-alcoholic versions of ready-to-drink cocktails. The rise of the ‘sober curious’ movement gives brands countless opportunities for growth in this segment.”

Bottom line: Tell stories to sell drinks, provide variety within those best-selling category standards to generate trial, and meet ‘sober curious’ customers where they are with delicious non-alcohol alternatives.