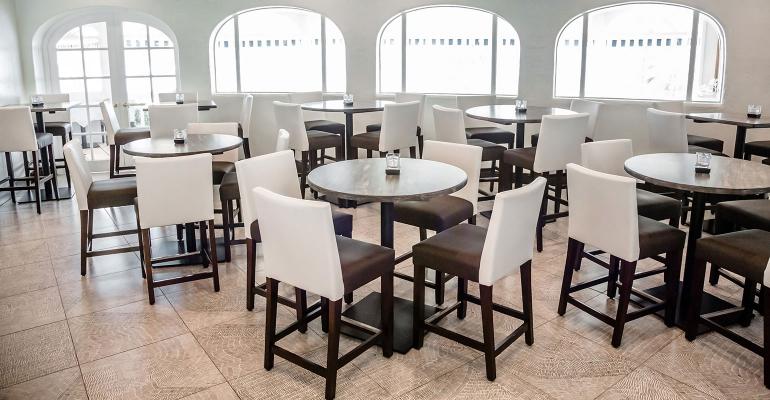 Photos courtesy of Las Brisas
The remodeling gives the restaurant "the light and airy feel of a high-end seaside resort."
Operations>Design

Iconic seaside restaurant renovates food and charm, making the most of its Laguna Beach location

Las Brisas, perched on the cliffs of picturesque Laguna Beach, Calif., is a restaurant established in 1938 as what was formerly known as the Victor Hugo Inn. In its heyday in the 1950s, the restaurant drew Hollywood celebrities, and its patio even appeared in the 1954 Bette Davis film “Now, Voyager.”

“We wanted to reclaim some of that initial allure. Some parts of the restaurant were dark and lacked ocean views. Our goal was to make over the space to have the light and airy feel of a high-end seaside resort,” said Bill Bartlett, senior vice president for Real Mex Restaurants, the parent company of Las Brisas.

Cypress, Calif.-based Real Mex is also parent to the El Torito, Chevys Fresh Mex and Acapulco chains. But the company acquired the Victor Hugo Inn and named it Las Brisas in 1979. It has remained a one-off concept within the group, but one that needed an upgrade to live up to its truly unique real estate.

Earlier this year, however, Real Mex set out to reinvent Las Brisas, or “the breezes” in Spanish. Over three months, the concept underwent a renovation to refresh the space but also to maximize on the stellar scenery outside the restaurant’s windows. Before (above) and after views of Las Brisas's dining room. “We honestly have the best panoramic views of the area,” said Bartlett. “Whenever you see pictures of Laguna Beach, they’re often taken right in front of Las Brisas.”

While the bones of the restaurant were kept the same to maintain the existing good flow, the new space offers views of the beach from multiple spots in the restaurant.

“We put in a 25-seat bar on the opposite wall so patrons can have a view of the ocean,” Bartlett said. “And before the end of this year, the archways separating the Cantina and dining room will also be opened up to further maximize the beach view.”

The new interior takes its lead from the ocean. The overall color scheme is lighter with crisp silvers, blues and greys with walls made of calcite azul that resemble water. The tablecloths in the dining room were replaced by driftwood-like tabletops, and shell-looking tiles adorn the bottom of the bar.

“For the bar itself, we used beautiful wood from the koa tree in Hawaii that has to be harvested when it falls naturally versus cut down,” said Bartlett. The new interior also features a framed five-foot-wide sea fan that mimics the branching shape of the koa tree.

Just as the Las Brisas interior increased its ocean views and beachside décor, the menu is also diving deeper in the sea. “Our menu is inspired by Mexico’s West Coast cuisine but it’s also what we call ‘sea-to-table’ fare,” said Bartlett. “Our Executive Chef Johannes Bernau knows the local fisherman who come in to present various seafood to us.”

Bernau has been with Real Mex since 2013, overseeing a variety of restaurants but with the remodel, Bernau is now focused solely on Las Brisas.

“With Bernau, we’ve constantly updated our menu to get further into seafood,” said Bartlett. “We’ve added Ahi Tacos with rice paper shells and served with sriracha aioli, which has been a huge hit. Out on the patio we have a lighter menu that includes a new ceviche with a sauce that gives it a really unique flavor. Over the years, the one entrée we’ve kept is our crowd favorite, our Sea Bass Pepita Tomatillo.”

Another new signature cocktail is the Laguna Pearl, made from Roca Patrón Silver, Hennessy, Patrón Citrónge, the sweet-and-sour mix and simple syrup with a black-salt rim.

In place of a traditional happy hour, Las Brisas is introducing drink specials in a daily Sunset Celebration. “We’ll start at 5 p.m. by blowing a conch shell and end it whenever the sun sets overs the coast,” said Bartlett. “We want to make it the best in Laguna Beach.”

The renovated restaurant also has a new walk-in wine cellar and a fine-tequila display. There, customers can also buy glassware hand-blown by local Laguna Beach artists.

The remodel also pays tribute to the history of Laguna Beach.

“When this area was first settled, it was almost a desert so they planted eucalyptus trees that you can still see today,” said Bartlett. “So we incorporated that by using eucalyptus branches to diffuse some of our ceiling lights to create a dappled sunlight effect.”

Bartlett said they’ve sought the best of the best in staffing and continually hold training to make sure all are onboard with the mission of the newly designed restaurant.

“People used to come here just for the view” said Bartlett, “but we want the dining and drinking experience to be as good as this spectacular view and we’re hearing just that.”