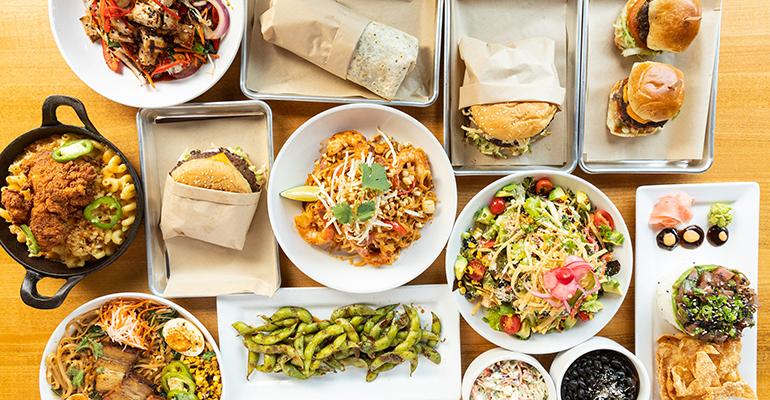 Concept Entertainment Group has created a menu of virtual brands that allows customers to mix and match items from different concepts for takeout and delivery.
Operations>Delivery & Takeout Solutions

Concept Entertainment Group, parent of the 10-unit Thirsty Lion Gastropub & Grill, has created a menu of virtual brands that allows customers to mix and match items from different concepts for takeout and delivery.

Central Kitchen, the umbrella brand for the new “online food hall,” currently includes six restaurant concepts, four of which are rolling out to Thirsty Lion locations for takeout and delivery only, with more concepts on the way.

“It's become anywhere from 20% to 40% of the revenue of these restaurants,” he said, noting that sales have increased significantly since it began combining the individual bands under the Central Kitchen banner and allowing customers to combine items from different concepts to create a single order.

In the company’s downtown Denver location, for example, off-premise sales went from about $600 per day to around $4,000 per day with the Central Kitchen concept.

Currently customers who shop via third-party delivery platforms see both the individual restaurant brands and the Central Kitchen brand, but the company has been migrating customers over to Central Kitchen by enclosing flyers with each order that tout the multi-brand offerings.

The individual brands include:

• Killer Wings, available in boneless or traditional styles with a choice of nine sauces;

• BYOBurgers, offering both “built” burgers and “build-your-own” options, along with sides and shakes.

Like the chef-driven menu at Thirsty Lion, the dishes at each of the Central Kitchen concepts are made from scratch using fresh ingredients, said Plew.

“We're competing on quality, not price,” he said. “Our customers are the people that still want quality, but they want the convenience of delivery or pickup.”

Additional concepts in development include a Mediterranean brand, a health-focused brand and a breakfast brand.

CEG first launched the brands in the kitchen of a location in Portland, Ore., that CEG owns called the Grand Central Restaurant and Bowling Lounge. Plew had been mulling over the idea of virtual food hall, and the pandemic presented him with the opportunity to test it out in the kitchen of the shuttered bowling center. 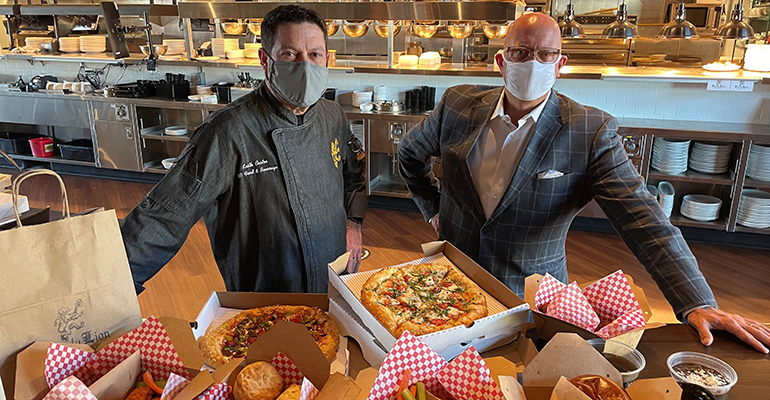 He and his partner, Keith Castro, above, vice president of food and beverage and executive chef, created concepts and menus that allow for some cross-utilization of ingredients and appeal to consumers with a taste for more sophisticated fare than typical fast food.

The brands were starting to gain traction in the Portland location, and they decided to roll them out to Thirsty Lion. After closing some of the restaurants at the start of the pandemic, CEG had reopened nine of the 10 Thirsty Lion locations — one in a mall in Scottsdale, Ariz., remains closed — and saw the virtual brands as a way to drive sales.

Thirsty Lion kitchens in Arizona, Colorado and Texas are currently offering four of the brands: Killer Wings, Southern Jewel, Soy Joy and Pizza & Spice. The other two brands are only offered in the Portland ghost kitchen. Thirsty Lion locations in Arizona are slated to launch the Central Kitchen concepts in March.

CEG had experimented with using the Central Kitchen brand in one market, but found that it didn’t communicate enough about the menu. Now that more awareness has been built around the individual brands, Plew said he feels confident that customers will adapt to seeing Central Kitchen as a multi-brand concept.

He said that within a few months he will likely transition to having just two digital storefronts, one for Thirsty Lion and one for Central Kitchen.

The customer response so far has been “really, really favorable,” said Plew. “Once people get it, they say, ‘Wow, this is awesome.’”

CEG’s move to offer multiple virtual concepts through a single digital storefront follows similar efforts by C3 (Creating Culinary Communities), which launched the CitizensGo platform to aggregate its virtual brands, and Kitchen United, which has been rolling out the MIX concept to unite the brands in its ghost kitchens, and, most recently, in a mall food court.

A key motivation for these initiatives is the desire to appeal to groups of people with varied preferences so that they can all order together.

Adding the Central Kitchen menu to the Thirsty Lion kitchens required some training — the new menus include about 100 items — but most of the equipment was already in place. Thirsty Lions already had pizza ovens, which happened to be idle because the company had removed pizza from the menu before the pandemic hit. In the front of the house, CEG installed warming shelves to store hot items waiting for pickup.

The incremental off-premises business from Central Kitchen has helped CEG retain staff, even as restrictions on restaurant dining have fluctuated, Plew said.

“We’ve been able to keep more people employed longer, particularly during these start and stops, because our business grew so substantially,” he said.

Plew said he also sees the Central Kitchen concept as a potential fit for noncommercial foodservice venues such as corporate dining.

“Instead of having to actually go to a cafeteria and get food, which has never been a good experience, you could just pull out your phone and order the food delivered to your cube, or you just pick it up and take it to a park or somewhere to eat it,” he said.

Grubhub is opening a virtual restaurant with MasterChef
Apr 29, 2022