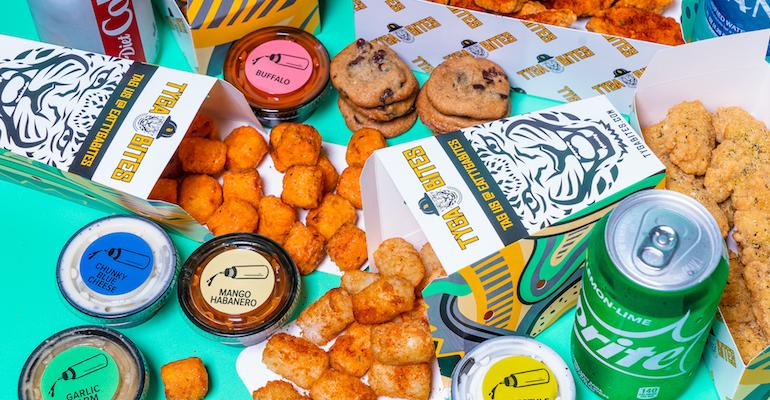 Veteran restaurateur Robert Earl on Wednesday announced the launch of a virtual concept called Tyga Bites, available in 30 markets across the country through Grubhub exclusively.

The concept, which is a partnership with the Grammy-nominated hip-hop artist Tyga, is the first in what Earl described as a series of celebrity-tied restaurant concepts that will be available for delivery only.

It’s a growing franchising strategy positioned to capture the unused capacity of restaurant kitchens that have been hampered by the pandemic across the country — in particular mom-and-pop operations that are looking for additional revenue but don’t have the capital to develop new brands themselves, Earl said.

Earl, chair of Earl Enterprises, has dubbed concepts like Tyga Bites as Virtual Additional Concepts, or VACs — concepts that brick-and-mortar operators can execute out of their existing kitchens and offer through third-party marketplaces.

“I believe that five years from now a very large percentage of the independent restaurant community in this country will have a second brand that is not available to the people dining in their place and has no interrelationship to the building, except that they’re using the kitchen,” he said.

Earlier this year, Earl launched Virtual Dining Concepts, a company now building a number of virtual brands, including the chicken wing concept Wing Squad, which was initially available in 16 cities out of Buca di Beppo and other Earl Enterprises restaurant kitchens.

Earl, who is working with his son Robbie Earl on the venture, has a long history of tapping the marketing power of celebrities in his work with chains like Hard Rock Café, Planet Hollywood and Earl of Sandwich.

The father-son team is also joined by celebrity chef Eric Greenspan, who has been a pioneer in the virtual restaurant concept movement in Los Angeles.

Greenspan had been operating several delivery-only brands under a “virtual food court” dubbed Alt/Grub/Faction in Los Angeles, initially using the CloudKitchens commissary. But he said those brands were paused when the pandemic hit, in part because he was concerned about the safety of workers in the commissary kitchen environment during the coronavirus outbreak. 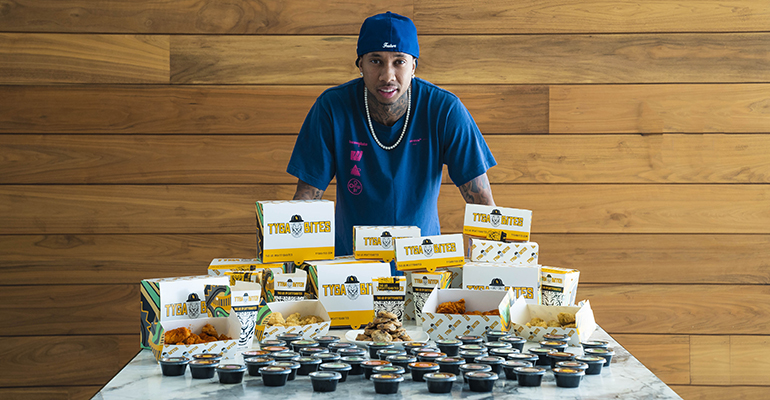 Tyga, the rapper, with the "bites."

The Tyga Bites concept has been in development for about a year, long before the pandemic accelerated interest in virtual concepts, Greenspan said.

“Even before COVID, virtual concepts were becoming more and more integral to the success and failure of brick-and-mortar restaurants,” he said.

Greenspan described Virtual Dining Concepts’ offerings as a turnkey solution: For Tyga Bites, for example, the company has created a national supply chain for consistency of product, as well as branded packaging. The virtual brand could be offered without any additional investment in labor, equipment or infrastructure.

The menu is simple and easy to execute: Baked chicken bites — essentially boneless wings, but no need for a fryer — with a variety of dusting spices (lemon black pepper; black garlic; peri peri) and 12 sauces, as well as regular or sweet potato Tyga Tots, chocolate chip cookies and beverages.

The marketing is handled nationally with the help of the celebrities and Grubhub, which in this case is an exclusive partner. That helps address the challenge of brand awareness, a common barrier of entry for virtual brands that are not tied to brick-and-mortar restaurants.

“We can give them the noise they need,” said Greenspan.

“In my estimation, there are 15,000-20,000 virtual brands in this country already, but they are single units. And that poor restaurateur is going to have to try to work out how to do packaging, social media and marketing, all for one or two units. I’m offering the opportunity to become part of a franchising system,” he said. “This could be the solution to the downturn in the restaurant industry.”

Earlier this year, Earl said he plans to revitalize the Bravo and Brio brands and take advantage of their prime real estate. Among the plans were to use the kitchens for virtual concepts.

The restaurateur predicted Tyga Bites will have 500 distribution points by the end of August.

More brands are coming — with more celebrities — but he said he couldn’t reveal who they are working with.

Greenspan, a celebrity chef in his own right, said he is happy to be working behind the scenes, creating exciting new brands that are not cookie cutter. “When you get a guy like me involved, as opposed to just a corporate chef, we’re going to have a product that’s a little more exciting,” he said.

“To me, it’s about brand building,” Greenspan added. “I can’t say what’s coming, but it’s safe to assume we’re going to cover a wide range of product offerings. Our goal will be to touch every genre of food.”